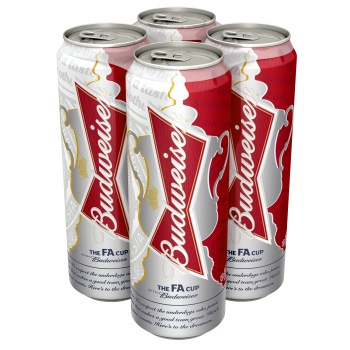 The cans are the first set in a series of limited edition packs which Budweiser is planning to roll out during the football season.

As with the new global packaging design, the focal point of the limited edition cans will be Budweiser’s bow tie icon, but it will also be complemented by a silhouette of The FA Cup and Budweiser’s football mantra, which reads: “We’re for the giants who show us how it’s done. We respect the underdog who proves they can do it too. So here’s to the camaraderie that makes a good team great. Here’s to the players who understand that every game counts. Here’s to the dreamers.”

Iain Newell, Budweiser’s European marketing director, said: “It’s been an exciting start to The FA Cup season for Budweiser so what better way to promote our partnership and the beautiful game than to launch limited edition cans for our consumers to enjoy and collect.

“These cans are the beginning of many more exciting plans we have in store for the trade this football season and we are confident they will bring the competition closer to fans around the UK.”

There will be 1.5 million limited edition 568ml (pint) cans produced that are being rolled out from this month, making their way into UK retailers over the next few months and available in four-packs for take-home only.