US defence secretary Leon Panetta will bring in the New Year with a $US10,000 bottle of Château Lafite Rothschild from 1870, having won a bet with a friend about tracking down Osama bin Laden. 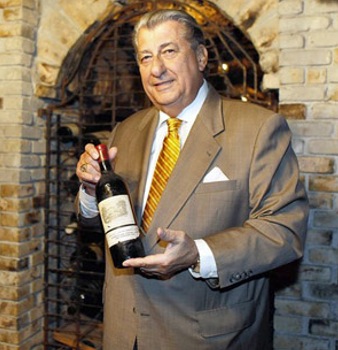 The wager was struck last New Year’s Eve when restaurateur Ted Balestreri (left) pledged to uncork the oldest bottle in his collection if Panetta, then the CIA director, found the al-Qaeda leader.

Four months later, Panetta’s wife, Sylvia, called Balestreri, a long-time friend, and told him to get the corkscrew ready.

As head of the CIA, Panetta had argued for and presided over the 1 May raid that killed Bin Laden at his compound in Pakistan.

Balestreri, co-owner of the Sardine Factory restaurant in Monterey, California, said the bet came during a New Year’s gathering in his wine cellar.

He told guests he had no plans to open his oldest bottle, worth at least US$10,000.

Government officials are subject to strict rules about accepting gifts, but the Pentagon was quick to point out that the bottle was not a present and would be served to guests at a private New Year’s party.

”This is in no way, shape, or form a gift,” a defence official said. ”It is being opened at a New Year’s Eve party for 30 or so people.”

Balestreri joked about the difficulty of sharing the bottle with so many guests, saying, ”I’ll probably have to serve it up with an eye-dropper to all 28 people.”

Having tried Lafite 1870 on 16 occasions, wine writer Michael Broadbent MW describes the wine as: “One of the all time greats. At its best, a powerhouse, massively endowed with every conceivable component and a sweet bouquet that lingers in the glass long after it has been emptied.”