The Ledbury has been named the best restaurant in Britain by The Sunday Times’ Food List. 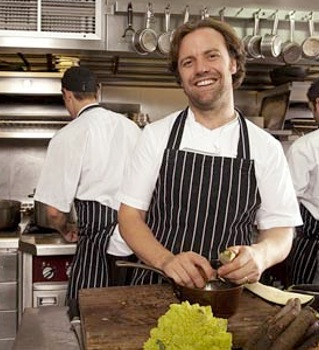 The Ledbury’s chef Brett Graham accepted the award and said it was a “huge honour” to top the list.

The list contained what are considered to be the 100 best restaurants in the country and included many from outside of London.

With 31 new entries this year, the number of restaurants included from outside the capital has risen from 40% to 50%, while the number of Asian entries had halved.

Alongside the usual London suspects such as Pied à Terre, Le Gavroche and Texture, other restaurants from around the UK included the Waterside Inn in Bray – which came fifth – Simon Radley at the Chester Grosvenor, Fishers at Baslow Hall in Derbyshire and La Bécasse in Ludlow.

Compiled in partnership with Hardens restaurant guides, the Food List gathered the opinions of over 8,000 Sunday Times readers to find the winner purely on the basis of which restaurant serves the best food.

As well as the awards for the Food List, Gidleigh Park was awarded the Rémy Martin XO Excellence Award for Best All Round Restaurant – which takes into account service and setting as well as food.

Chef Marcus Wareing was on hand to accept the Coeur de Cognac Award for Best Dessert for his restaurant at The Berkeley and Heston Blumenthal’s Dinner was awarded the Rémy Martin Award for Best Newcomer.

The full list will be published in The Sunday Times this Sunday, 30 October.