Benares has been tantalising the drinks business for a while now. 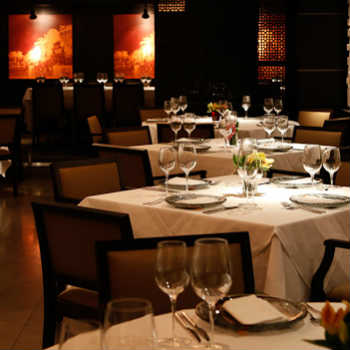 Despite spending a full two hours discussing the intricacies of matching Michelin-starred Indian cuisine and wine with head sommelier Costanzo Scala, followed by a visit to check out its bar offering, the full Benares experience had always proved elusive.

Finally came the chance to put all that wine matching theory through its paces with the news that chef Atul Kochhar was holding a dinner to show off dishes from his book, Revisiting Fish, Indian Style.

Despite – or perhaps because of – being born in a landlocked part of the country near Calcutta, Kochhar decided to give seafood dishes his signature British-Indian fusion treatment. “This book is about great seafood from around the UK, but inspired by dishes from India”, he explained to us.

If anything, the delicacy of fish, coupled with complex spices, promised to be a real test of Scala’s theory that “for fine-dining Indian cuisine, wine is by far the best match; it brings out all the spices and flavours.”

The first dish could have been designed to give sommeliers nightmares: Goan spiced mackerel with gooseberry chutney and pickled pear slivers. Stepping up to the challenge was the Californian Clay Station Viognier 2010.

On its own, this wine would have felt clumsy and rather flabby, with its very ripe notes of gently roasted peaches; in this scenario however, that fat came in handy for cushioning the impact of the rich chutney and spicy, strong mackerel flavours. 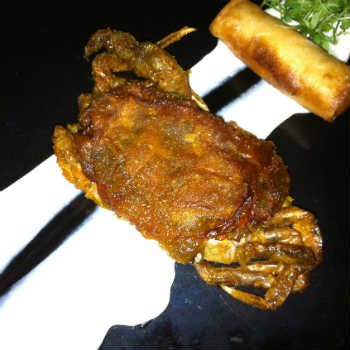 Next up came a whole soft-shell crab with spring roll and an apple and peanut salad. Scala had picked New Zealand for this round in the form of the Ata Rangi Craighall Chardonnay 2008 from Martinborough. The carefully balanced oak and lactic elements not only stood up to but complemented the lemongrass in this dish. Unlike its predecessor, this wine showed extremely well in its own right, providing another example of why Kiwi Chardonnay deserves a higher profile.

Gathering momentum, we moved on to a coconut and ginger prawn moily, paired with an own-label Gewürztraminer made for Kochhar by Gueth in Alsace.

The prawns were large, rich and perfectly cooked, as if masquerading as lobster. Nevertheless, the off-dry richness of the Gewürz almost overpowered the dish, but came into its own for neutralising the lingering spice which can present such a challenge for wine matching.

After an uplifting palate cleanser of green apple sorbet, given a less frivolous dimension by its underlying apple skin flavour, we moved on to the final demonstration of fishy flair: tandoori stone bass with green Nilgiri korma sea vegetable salad and a ginger and coriander sauce.

More than any of the preceding dishes, this demonstrated the skill required to marry so many powerful flavours, even before the wine was factored in. The smokey notes from the tandoor entwined themselves with the lime and mustard marinaded bass, while the samphire accompaniment added a salty tang that cut through the vivid green korma sauce.

You would have been forgiven for losing your nerve here and opting for a beer, but Scala brought out his second New Zealand trump card, the Manawa Pinot Noir 2008 from Marlborough.

Once again, this showed how the New World’s ability when it comes to producing soft, juicy fruit makes it a more rewarding partner for spicy food than many of the Old World’s more austere, tannin-laden offerings. On this note, if judged purely on gastronomic terms, the success of Bordeaux in China is baffling. 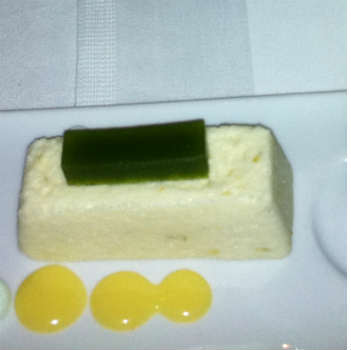 We finished the meal back in the Old World with an Austrian Welschriesling Eiswein 2008 from Kirnbauer. Its bright acidity worked perfectly with the lime mousse, which was presented with lemon thyme jelly, lemon curd, miniature airy meringues and a vibrant basil sorbet.

The latter, a striking balance of sweet and savoury, picked up the subtle herbal notes in the wine, which you might otherwise have missed.

For all that Kochhar’s book is supposed to inspire people to cook these dishes at home, their intricacy and ingredients make it more pleasurable to treat yourself to the professional version here at Benares.

As an added bonus, the service of the staff was matched by their warmth and evident enthusiasm for the dishes. Even arriving at the downstairs desk feels more like entering a spa than a restaurant.

In fact, for those leaving the familiar comfort zones of either the UK’s prolific but less ambitious Indian restaurants or the European cuisines which account for most fine dining experiences in this country, the spa mentality is certainly the key to making the most of this place: sit back, relax and put yourself into the hands of the experts.

Benares will be hosting further events in this series of wine dinners:

2 November – an evening hosted by Scala, exploring how to pair Indian cuisine with wine, followed by dinner. £250.