It’s still cool to be hot

The high temperatures experienced in the Douro mean it is a challenging viticultural site, but one that consistently produces excellent wines. Sally Easton MW reveals some of its secrets. 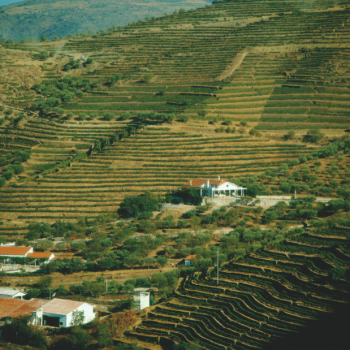 The Douro is one of the oldest vineyards in the world, and it also ranks amongst the hottest, making it a challenging viticultural landscape. Yet the region makes some of the finest still and fortified wines known to man. When all the buzz is about cool climate, why is it cool to be hot in the Douro?

Heat stress is very real in a region where daytime temperatures can reach 40 to 50°C. Additionally, Paul Symington, chairman of Symington Family Estates, highlights a 1.2°C rise in the average temperature over the past 35 years is plenty to contend with. But, he adds: “There is no clear pattern of rainfall changing, as there is with temperature. You can say it’s getting hotter, [but] you can’t say it’s getting drier.”

“There’s always been heat in the Douro,” adds Pedro Barbosa, the viticulturalist at Quinta do Vale Meão in the Douro Superior, “and there were no problems like there are today. In the past, people used mixed grape varieties, so problems were not so exposed.” Single-block plantings highlight issues, as do the use of planting particular clones.

In a scientifically modulated reversion to older practices, Antonio Magalhães, viticulturist at The Fladgate Partnership, which only makes Port wine, says they “plant in micro-blocks, with the aim of looking after the grapes separately during the year, and to ripen them at the same time. We then pick just-ripe, and ripe, and some overripe” to make the Port blend.

Such micro-planning melds with the multiplicity of aspect, for example, taking advantage of the heat-loving Tinta Cão on south-facing plots, and planting wind-affiliated Tinta Roriz on spurs of land, sometimes just a dozen vines in two rows on a tiny plot of particular aspect. It is aspect that Magalhães argues is the most important consideration in an extreme mountainous environment, and it is a factor that cannot be controlled – orography has created 360° aspects.

He says: “In the middle of the afternoon, at the same altitude, the difference between north and south is 2°C.” So in a hot climate, Magalhães prefers an east-west orientation where the sun is over the canopy at the hottest time, but he rarely gets this as, because of the mountains, “we cannot choose the row orientation”.

The evolution of grape varieties is another of the great adaptations that, along with the fact that blending different vineyards, different grape varieties, and in the case of Port, different years, allows unevenness to be ironed out. But Douro wine requires different fruit parameters, says Rui Cunha of Secret Spot Wines: “We don’t want to produce over-matured red wines. We’re looking up to around 400-500m to produce elegant wines.” 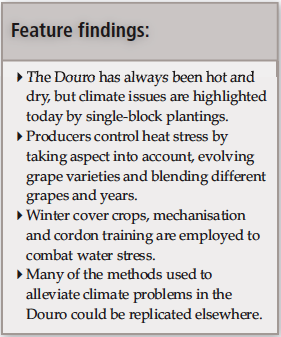 Indeed above around 500m production is virtually all Douro wine – lower altitudes get more points in the Port classification system. Even with the choice of grape varieties, heat stress is considered the most important factor.

Winemaker Charles Symington reckons it’s about “varieties with the best resistance to heat. It’s more about heat than rainfall. “Touriga Franca survives best; it’s late ripening, resistant to heat and low rainfall. We tend to plant it at lower altitudes close to the river, and west facing, which is often the hottest of the four alternatives.

“It’s difficult to have high Baumés, so it’s ideal for hotter locations. On the other hand, Touriga Nacional is earlier ripening, getting higher sugars earlier on. This is interesting if it’s east facing and higher.”

Tinto Cão is an interesting grape. Barbosa says that “Cão is well adapted but the tannins are rough for still wines”, whereas Magalhaes, making only Port, would plant Cão “for climate change. Viticulturally it is a wonderful grape. In a hot climate it is the best, it has high tolerance to drought and sunburn, it’s late ripening with a high acid content. But in vinification it is usually less than 5% – it’s not high in colour, it’s not a strong wine.”

Water stress is a variable issue west to east, but winter cover crops have become an important anti-erosion tactic, with a moisture benefit too.

Charles Symington says: “We thought the cover crop would compete with the vine for humidity, but in summer it dies down. [Then] the dry stubble breaks up the wind and doesn’t let wind erode so much.” 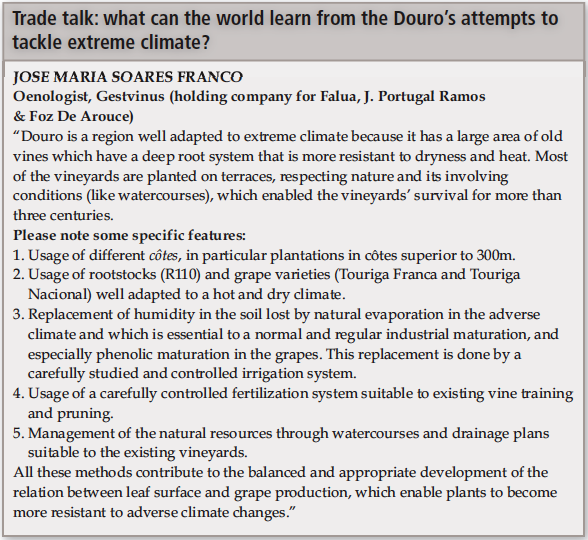 But, adds Cunha: “Our experience of planting grasses to fight erosion [has shown it also] makes the soil healthier, and helps fight heat. Making mulch creates shade and reduces soil evaporation, as well as reducing erosion.”

The impetus of dealing with water stress is towards finding ways of working without additional water. Bringing irrigation water into the vineyards, for example by pumping up from the river, would be prohibitively expensive, and irrigating vines discourages them from sending roots deep into the schist to look for water reserves.

The lessons are already there, believes Luis Seabra, winemaker at Niepoort’s Quinta de Nápoles. “Mechanisation changed the viticulture of southern Europe a lot. People are making vineyards to be more efficient, to produce more quickly with higher alcohol. So you have higher canopies which suffer more water stress, with roots that are less deep so suffer more in summer. We need to lower the canopy.”

Modern viticulture uses cordon training, so there is a lot of permanent wood. Barbosa says such trained “20-30 year old vines are dying before the ancient ones”. The traditional guyot training, he believes, “is adapted to Douro. The trunk height is 25 to 30cm. But with cordon it’s 50cm high then 1m long. So there is 1.5m of old wood with cordon and just 30cm of old wood with guyot. With a small amount of water, it’s more efficient in guyot”.

At Vale Meão all new plantings since 2006 have reverted to the traditional guyot training, which, says Barbosa. “will still be here when I am not”.

This and other lessons from the past are being relearnt for the Douro’s extreme climate, and could provide important new lessons for other hot climate zones.