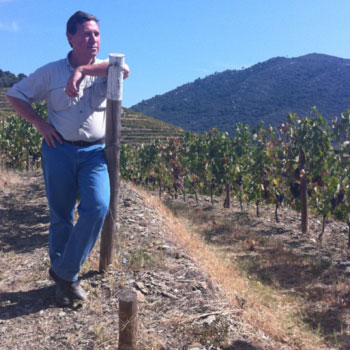 “Some periods of this year look like the future,” remarked Antonio Magalhães, head viticulturist for The Fladgate Partnership.

In particular, he pointed to “the wet winter but the drier spring with a higher temperature.

“In April the average temperature was 4ºC higher than normal and May was 3ºC higher,” Magalhães recalled, noting that as a result “bloom and veraison started earlier.”

However, he said that in contrast, “June and July were not hotter than normal. That balance is very important.”

Although relatively temperate, the summer saw no rain for four months, with Magalhães observing that as a result “there was not enough water to ripen the grapes.” This situation was resolved by two sets of rain in late August and early September.

Despite a positive outlook as the Douro harvest got underway, David Guimaraens, head winemaker for The Fladgate Partnership, who has worked with Magalhães for 19 years, remarked: “It’s been a challenging year. We had a heatwave last week when it hit 38ºC.”

On top of this, Guimaraens recalled: “We had mildew in the spring and a heatwave with humidity on 24/25 June when a lot of tinta barocca got burnt.

“We had four months with no rain, then two sets of rain in the third week of August and 1/2 September. That second set sent everything haywire. Three days afterwards the berries tasted of nothing and dropped by 1.5 Baumes. If we’d had more rain things would have collapsed.”

Fortunately the wet weather was followed by a hot period, which concentrated the grapes and made the skins more fragile, a factor that Guimaraens explained bodes well for the Port grapes’ short fermentation stage.

Comparing 2011 so far with previous vintages, Magalhães observed: “It’s a blend of different years. This ripe period remembers 2009, but the spring was different; for the spring remember 1992.”

In summary, Magalhães described 2011 as “a very good year so far,” although he cautioned: “You never talk about the wine at this stage.”

For more on managing heat stress in the Douro, click here