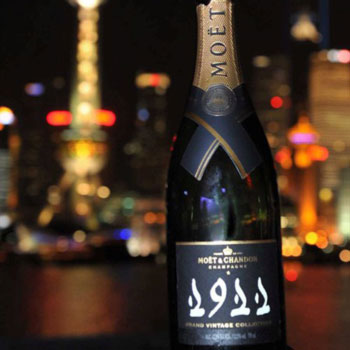 Keen to promote Champagne’s ageing potential, the region’s leading cellar masters have been dipping into their wine libraries and re-releasing some of their greatest older vintages under a new label.

“It’s a stunning Champagne – an inspiration. I’m astounded by the fact that, after a hundred years, it overflows with vitality and energy, and boasts both impressive depth and amazing freshness,” Moët cellar master Benoît Gouez told the drinks business.

Each of the 11, six-bottle cases, are being offered to a different market around the world. The first case was auctioned at a gala dinner in Shanghai recently, raising $100,000 for charity, while one of the cases will go on sale in Harrods in November.

Meanwhile, Olivier Krug told db of his excitement about the ageing potential of Krug’s multi-vintage Grande Cuvée, having recently tasted a bottle from the ‘70s at a get together in New York with some of the world’s biggest Champagne collectors.

“It had developed like a Krug Collection wine, but without the single vintage intensity. Round, rich, nutty and long, it was declared the wine of the night, despite competing against Krug ’59 and Clos de Mesnil,” said Krug, who has plans to re-release older bottlings of Grand Cuvée and isn’t ruling out an extended aged Krug NV Rosé.

Louis Roederer is also busy building up its library series in anticipation of a new range. “We’ve started an ambitious cellaring programme from the 2002 vintage, the fruits of which won’t be released for another two-to-three years. People are starting to wake up to Champagne’s incredible ageing potential,” said managing director Frédéric Rouzaud.

“Champagne is the best white wine for ageing in the world. Everything we can do to prove to customers, collectors and connoisseurs that Champagne has a tremendous ability to age is a good thing,” Rouzaud added.

Lanson has also got in on the act. The house plans to re-release a selection of its library wines next year under an as yet undecided name, as managing director of Lanson International Paul Beavis told db: “We’re looking to create unique parcels of late disgorged vintages in magnum – ’76 will be our first release. We’re even developing a “disgorge to order” service for our top clients, which will be very unique.”

Part of the attraction of these much-prized wines is the knowledge that the bottles have been kept in pristine condition, and have perfect provenance.

For more on the trend for library wines in Champagne, see the October issue of the drinks business.