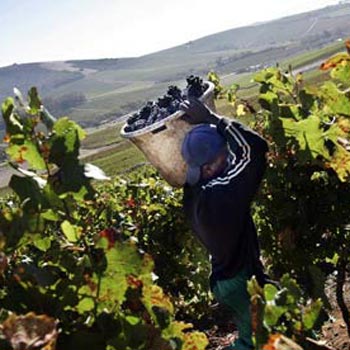 According to the report, many workers are forced to live in pig sties, are denied access to safety equipment, while employers ignore basic labour rights.

WOSA chief executive Su Birch said that while the organisation doesn’t condone any form of human rights abuse, the report could be unfairly damaging for the country’s wine industry.

Birch stressed that the report had the potential to do great harm to the industry that is already battling in the face of a strong rand and a protracted global economic downturn, without the benefit of the government support that its global competitors enjoy.

“Ironically, it could also jeopardise the jobs of the very people it claims to be championing,” she said.

“In the interests of the continuity of the industry and its capacity to create employment and sustainably improved working conditions, the wine sector deserves to be monitored with fairness and not to be undermined by assertions based on what appears to be random anecdotal evidence.

“Let me make it very clear: we condemn out of hand any and all human rights abuses on wine farms. Our disappointment in the bias of the report is in no way an indication of our support for inhumane practices. It expresses our concern that trade and consumers all over the world could become alienated from South African wines.”

Claims made in the report include workers having no access to sanitation facilities or drinking water, as well as being exposed to pesticides.

“The government, and the industries and farmers themselves, need to do a lot more to protect people who live and work on farms,” he added.

The report said that the centuries-old South African “dop” payment system, whereby workers were partly paid with wine, had largely disappeared, though it did find two farms that still provide workers with wine as partial payment.

One worker was quoted in the report as saying: “During the week, I am given wine in the afternoon, at 12pm, and at 6pm in the evening. I also get this on Saturdays. On Sundays, we get wine in the morning, afternoon and evening.

“In the morning, we get it before 7am, at 12pm, and we have to do Sunday prayer and then get more wine at 6.30pm. If you don’t want the wine, then it’s your choice.

“Everybody is drinking except the children and the guy driving the school bus.”

Birch said the 96-page report had used a questionable basis for the selection of many of the respondents interviewed in the study, while interviews with workers had not been independently verified and nor had employer reaction to allegations been sought. As a result, it was extremely difficult to respond to specific allegations highlighted by the study.

According to its authors, the report was based on interviews in 2010 and 2011 with “over 260 people, including 117 current or former farmworkers and an additional 16 farm dwellers.”

South Africa has laws guaranteeing wages, benefits and safe working and housing for workers and other farm dwellers. But the government has largely failed to monitor conditions and enforce the law, HRW says.

Birch said: “Readers of the report have no basis for understanding how representative the sample of respondents is. The study relies on anecdotal evidence that uses the cover of respondent protection to avoid substantiating the claims it makes.

“Moreover, the media release, provocatively entitled South Africa: Farmworkers’ Dismal, Dangerous Lives and distributed internationally to announce the report, does not present a sufficiently comprehensive picture of conditions across the wine industry and as a result, is potentially misleading.

“Like the report itself, the release disingenuously plays down the significance of the wine industry’s substantial direct and indirect contribution to improving working conditions through organisations such as the Wine Industry Ethical Trade Association (WIETA), and Fairtrade.

“It also makes scant mention of empowerment initiatives. With positive examples of the progress made in redressing past wrongs rendered virtually inaccessible to all but the most serious readers, the report negates the work of those who should be allowed to stand out as role models to their peers.”

South Africa is the world’s seventh-biggest wine producer, filling the equivalent of more than 1.2 billion bottles a year.

Responding to fears that the report could damage the South African wine industry’s image around the world, Bekele said: “The answer is not to boycott South African products, because that could be disastrous for farm workers. But we are asking retailers to press their suppliers to ensure that there are decent conditions on the farms that produce the products they buy and sell to their customers.”

Birch appeared on the Today programme on BBC Radio 4 this morning to discuss the issue. Listen here.