Drinkaware has unveiled plans for the third year of its £100 million, five year campaign, “Why let good times go bad?” 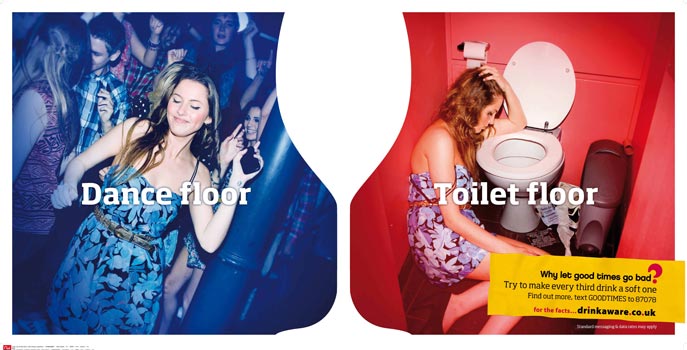 This year sees the UK alcohol awareness charity’s campaign extend its reach to digital and mobile activity for the first time, with £2m worth of advertising in this area, as well as strengthening its partnership with the National Union of Students and the launch of a new “Good Times” app.

The digital advertising spend will be bolstered by £15m-worth of in-kind advertising and media support provided by its expanded network of almost 60 drinks industry partners, as well as a further £3m invested by Drinkaware on outdoor advertising across the UK.

Having carried out small scale activities with the NUS last year, Drinkaware has now stepped up its involvement to a level which will see its message reach around 2.5m students. Since this latest phase of the campaign launched on Monday 22 August, the NUS website has carried the Drinkaware message on the front page of its website.

The new app, which launches next week across iPhone, Android and Blackberry, features tips on safe drinking, a scrap book with private wall for sharing posts between friends, tools for keeping track of alcohol intake, safety advice on sobering up or finding friends and a “get me home” feature which provides local taxi details.

As with previous years, the primary focus of the campaign is to challenge young adults’ attitudes towards excessive alcohol consumptions and the social acceptability of drunkenness. This message is conveyed primarily through tips for smarter drinking, including eating a meal first, alternating alcoholic drinks with soft options and looking after friends.

The 2011 campaign takes the theme of the tipping points that distinguish a good night from a bad one. A new series of visuals illustrate examples including the tipping point from “dance floor” to “toilet floor”, or friends “laughing with you” to “laughing at you”.

Pointing to the growing support from drinks firms – nearly 20 more have joined as campaign partners this year – Drinkaware chief executive Chris Sorek told the drinks business: “That expansion is really fantastic; it shows the commitment from the drinks industry.”

He emphasised the importance of ongoing industry support, saying: “Vital to the campaign’s success is reaching directly to the target audience by focusing activity in the spaces they use the most and maximising the investment in the campaign.

“This is only possible with the active support of Drinkaware funding companies who will amplify the campaign through their own communications – on packages, in pubs and in stores.”

Drinkaware research tracking the success of the campaign each year showed that, in 2010, 77% of young adults questioned confirmed that they had adopted one of its tips.

In particular, Sorek quoted data suggesting that “upwards of 90% of all young adults eat before drinking.”

On this basis he observed: “The ‘Why let good times go bad?’ campaign is an excellent example of a successful public health campaign that doesn’t cost the taxpayer a penny.”