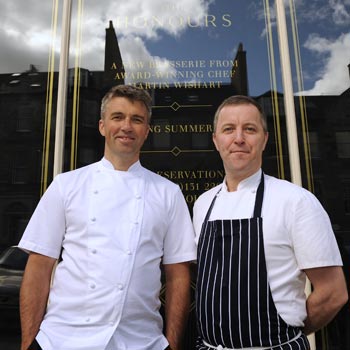 The brasserie’s name, The Honours, draws on Scottish history, referring to Sir Walter Scott’s discovery in Edinburgh castle of the Scottish crown jewels, also known as “The Honours of Scotland”. Scott lived for many years on North Castle St, where The Honours is located.

Further inspiration came from The Honours of the Table, a rare 18th century book on table etiquette.

Describing The Honours, which opens this Thursday, 14 July, as “the most exciting business venture that I have been associated with,” Wishart defined his new restaurant as “a contemporary brasserie”, which has been conceived “in interpretation of the Parisian classic – a restaurant where traditional French cuisine meets the flavours of the Scottish market.”

Research for The Honours saw Wishart and Tamburrini visit venues such as Daniel Boulud’s New York restaurants and Wolfgang Puck’s Singapore branch of Cut, which convinced the pair to invest in a Josper grill, the charcoal burner favoured by several chefs for cooking steak.

Having worked for a number of high end UK restaurants, including Marco Pierre White’s L’Escargot and Wishart’s fine dining restaurant in Leith, Tamburrini’s most recent role has been as executive chef at One Devonshire Gardens in Glasgow, where he relaunched the restaurant in 2006 under the management of Hotel Du Vin.

Front of house will be overseen by Steven Spear, who has worked at Restaurant Martin Wishart since 2002. Having compiled “a concise but varied” wine list in collaboration with Restaurant Martin Wishart’s manager Jean Christophe Froge, Spear observed: “Ultimately we hope to be able to offer the majority of the selection on the list by the glass. We will also be offering a range of classic cocktails made with premium spirits.”

In addition to his Michelin-starred flagship, Restaurant Martin Wishart, which he opened in Leith back in 1999, Wishart runs a cookery school and restaurant at Cameron House Hotel on Loch Lomond. Last year he was voted the UK Chef’s Chef of the Year by the AA Guide.