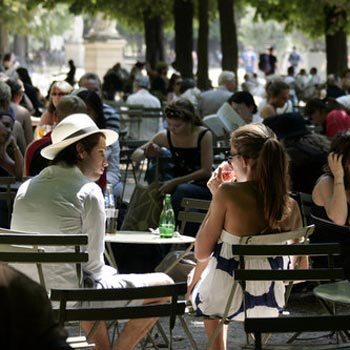 An essential element of any satisfactory watering hole is the atmosphere, often composed by the people in it. Or those who walk past it in full view of the drinkers, much like models on a catwalk.

People watching, while a global pastime, is more popular in some countries than others; some cultures seem to have founded their café culture – nay their entire culture – around this, (cue France and Italy), while others seem utterly uninterested in observing their fellow countrymen, such as Germany.

There are different degrees of people watching, from the completely disengaged style, watching surreptitiously from below some café’s great awning, to the all-immersive observing in a lively bar where the world and his dog meets for a drink, where one is willingly sucked into the animated conversations going off on all sides.

We’ve tried to get a good spread of all the different types of people watching, from casually observing people busily getting on with life, to celeb spotting, to picking up style hints from the well-heeled Glameratti of the world.

This is by no means an exhaustive list; due to a lack of adequately extensive travel experience (and funding), so please feel free to add to this list. 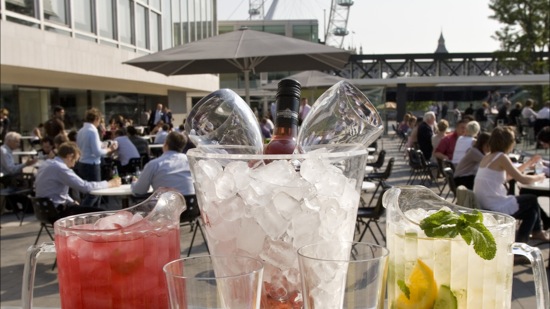 In the heart of the cool, hip and happening South Bank area, in summer this bar offers a fantastic opportunity to watch Londoners and tourists alike kicking back and making merry.

The South Bank constantly has a huge amount going on, from concerts at the Royal Festival Hall, to plays at the National, or films at the British Film Institute, not to mention the host of pop-up stands, be they restaurants, bars, comedians…So there’s something to cater for all tastes.

As a result, the mix of people there is highly eclectic, showcasing the huge range of people who live in London. In addition, it’s a natural magnet for tourists, given its central location and wealth of fun activities.

Drinks are surprisingly good, and the bar staff don’t scrimp on the Campari with their Negronis – always a good thing. Considering its location, it’s decently priced. Comes highly recommended. 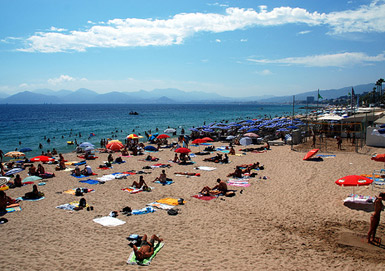 Set on La Croisette in Cannes, this was never going to be anything but perfect for A-lister spotting, especially during the Film Festival period.

Le Festival is friendly, fun and the drinks are amazing, if a little pricey – but hey, when in Cannes… Sit here and soak up the red carpet atmosphere, watching little old ladies with their handbag sized, perfectly coiffed pooches sat neatly in their bespoke Birkin, or the stupidly glamorous billionaire arm candy-esque girls teeter past on vertiginous heels.

There are also achingly cool-looking yacht-owning, perpetually sunglasses-clad men who look as if they have walked out of a D&G advert. That’s not a bad thing from a purely aesthetic point of view. That, ladies and gentlemen, is what Cannes is all about. 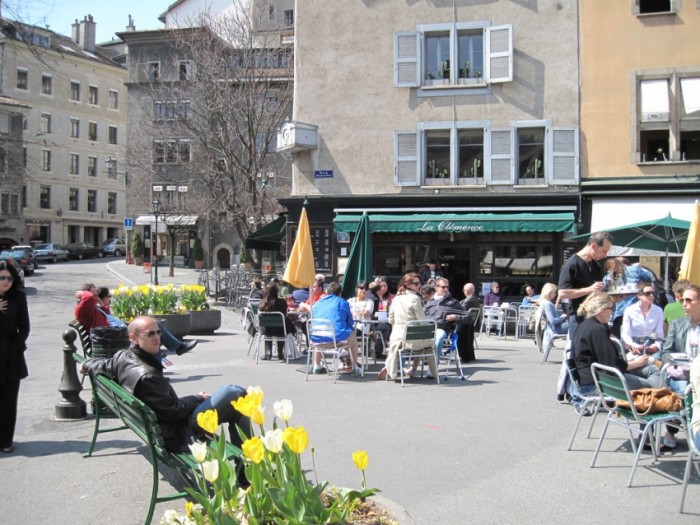 This is people watching in its purest form. Set in a lovely pedestrian area in the ancient and peaceful Geneva Old Town, drinks are decent (although cocktails are not their forte – stick to nice local wine, like a good chilled Fendant). Sit back and enjoy the peaceful, ambling crowds which are a mix of zen tourists and even zenner locals. Given the international nature of the place, there are people from all over the world there on the weekend.

Less voyeuristic in nature than their French neighbours, the Swiss approach to people watching makes it a gentle, passive pastime that is non-judgemental and mildly curious only.

The fashion statements aren’t as bold, the elegance less frappant, and the arrogance less markedly French, but it’s much more a relaxing method of whiling away a couple of sun drenched hours.

A great chance to have an utterly stress-free, relaxing moment in the sun watching a hugely multicultural crowd with nothing more pressing on your mind than wondering what to drink next. 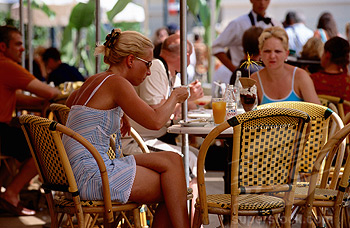 This might seem like an obvious choice, and, well, I suppose it is, but that’s because a) Monaco is small – VERY small – so space dedicated to open Piazza-style, prime people-watching seating is limited, and b) as it’s an obvious choice everyone who’s everyone is going to congregate there.

With the Casino on your left and the Hotel de Paris across the road, there’s never a lack of interesting characters milling around there, tossing keys to immaculately dressed valets to park their Lamborghinis and Maseratti.

The prices are not negligible, but you wouldn’t expect anything different in the Café de Paris in Monaco.

That said, the sting is taken out of the cost somewhat by the lack of tax; in fact some places in Monaco are cheaper than the beach front in neighbouring Nice. 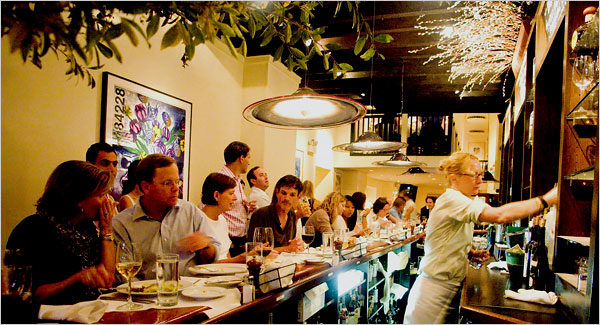 This trendy bar has been a hit with the local New Yorkers since its creation in 1985. With good food, good wine – with an excellent by-the-glass offering – it’s clearly a good choice for the epicurean.

It’s also a magnet for the rich, famous and glamorous – a sight that somehow makes your Manhattan or Cosmo taste that little bit more sophisticated.

The Gibraltar, on the corner of Estados Unidos and Pà San Telmo, Buenos Aires 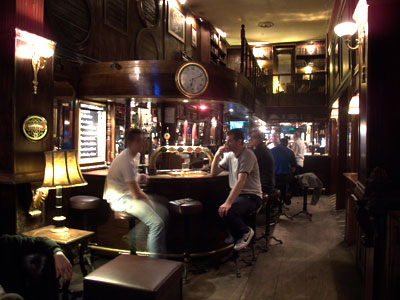 A great British-themed pub with none of the tackiness and which feels like the genuine article with Argentine touches.

It’s one of the few places there where you can get pints as standard. It’s located in quirky, artistic and retro San Telmo which has a good mix of backpackers from all over the world and suitably unusual local types.

Despite being an ex-pat bar, the locals love it and there’s a great mish-mash of people from every corner of the globe, happily congregating and drinking together.

It makes for a much more interactive form of people watching as you’re very likely to get caught up in one of the many lively conversations taking place there, but its a great place to observe and meet all sorts of people from all sorts of far flung places. 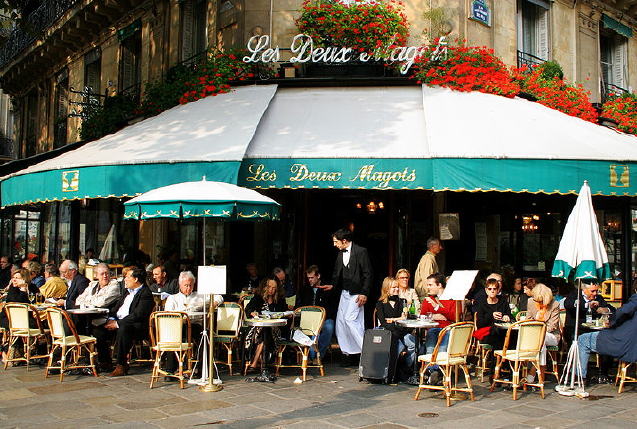 Of course Paris would feature on this list – capital city of a culture devoted to people watching, and what better place to do it than the beating literary and fashionable heart of Paris, St-Germain-des-Prés.

Les Deux Magots has a whole host of great and glorious historic patrons, from Picasso to Sartre to Hemmingway.

Bang in the centre of Rive Gauche territory, it offers a fantastic vantage point to admire the budding creative types, all impeccably dressed and excruciatingly elegant. People watching is a spectator sport in that people dress to be seen, and reciprocally people sit at cafés with the express purpose of watching, and be watched by other sitters.

There’s no sense of prying eyes, just a mutually inquisitorial pastime. We suggest a pastisse – acceptable at pretty much any time of day. Alternate with ‘une noisette’ or ‘un p’tit café’ for a little pick me up entretemps. 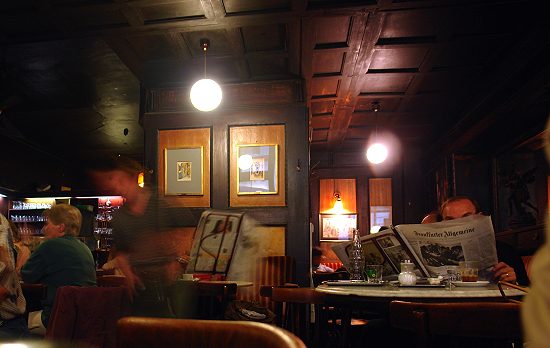 Slightly run down, shabbily chic, rough at the edges, the interior has not changed since the 1930s and is located in a building designed by the Austrian architect Adolph Loos.

Strangely enough, the proprietor Leopold Hawelka hasn t changed since the 1930s either.

He and his wife have run the business almost without break (except for the Second World War) since that time and Leopold is a regular face watching customers coming and going as his family get on with running the business.
Once a favourite hang out of Warhol and Miller, Hawelka retains its appeal for the young and artistic.

Viennese eccentrics and aristocrats, émigrés and even the occasional tourist make this a good spot to adjust to the more sedate pace of Austrian life. 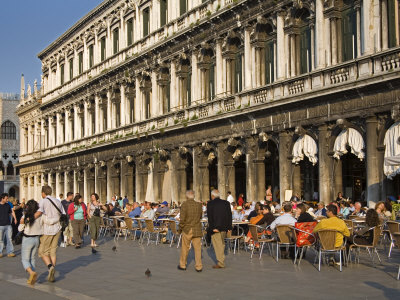 This place has always attracted some highly interesting types; for the literary fans, Proust, Dickens and Goethe’s affinity for the place will go down a treat, while for the more romantically inclined Byron and Casanova’s patronage will please.

The Caffè has a well established history with art and artists, with a continually changing display, attracting a host of arty types, as well as some of Venice’s better heeled residents.

It’s not only a great place for watching some of Venice’s beautiful people, but also a damn good place to be seen yourself.

Walking around GUM, the massive department store just off Red Square, is an eye-opening experience.

Packed full of Moscow’s elite and curious tourists, Russia’s finest are on display for all to see. Not only is GUM a stunning setting, but the extent of beautification (in some cases more successful than others) undergone by the women there is equally impressive.

The drinks are not the most impressive, nor are they cheap, but it is a little price to pay for sitting back and enjoying the breathtaking spectacle of Russia out in all its finery.