Gin looks for an in

Gin has so far failed to make its much-vaunted resurgence on the international spirits stage. Does the category need to completely reinvent itself, asks Euromonitor’s Spiros Malandrakis. 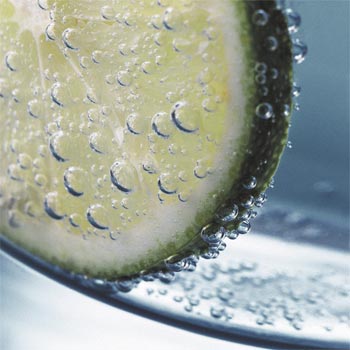 Steeped in tradition and synonymous with the Great British spirit, the Royal Navy’s favourite and boasting regal aficionados, gin has been impatiently waiting for its long-overdue revival for the last couple of years.

Nevertheless, dshy burlesque outfits and pot still, small-batch driven buoyancy, the category has still not mespite flaanaged to steal the limelight on the all-important white spirits stage, where vodka remains the undisputed protagonist.

With a recent, rather radical launch turning heads as well as irreverently – and refreshingly – questioning gin’s signature ingredients and flavour profile, the big break could be just around the corner.

Admittedly, rumours regarding gin’s revival have been greatly exaggerated. Posting a 1% total volume decline at global level in 2010, essentially a performance mirroring the category’s underwhelming growth rate in 2009, the much-vaunted great leap forward is apparently yet to come.

The US powerhouse, still accounting for the vast majority of sales, did see some hint of increased momentum. US volumes creeped marginally higher, posting 1% total volume growth in 2010, driven by nascent polarisation trends. The UK, the category’s birthplace, witnessed a more or less stable performance, with comparatively healthy 2% total volume growth, following up on 2009’s relative upsurge.

However, this is where the good news seems to end. India, third in the global volume rankings, saw sales retain the negative trajectory initiated in 2009. Posting more than a 1% total volume decline in 2010, gin successfully managed to improve upon the dismal performance of 2009 but did not escape negative territory. 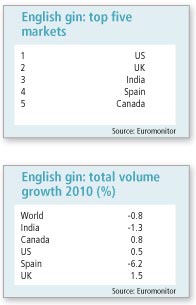 The ongoing transition from local specialities to branded products did not benefit the category. Unlike vodka and other blended Scotch whisky, in which standard brands dominate, gin continued to largely be in the grip of economy brands, which accounted for 50% of its volume sales in the country.

Most importantly, unlike other blended Scotch whisky and vodka, which were seen as youthful and fashionable products, gin has not dazzled the all-important urban youth and hence has continued to mainly focus on low-income, heavy-drinking consumers in western and southern India.

On an even bleaker note, Spain, ranked fourth in volume terms, faced the inescapable reckoning that followed the landing of the recession. Surprisingly, gin consumption either moved towards higher-end varieties or stopped altogether.

Overall gin volumes tumbled, posting more than a 6% decline in 2010 at the same time as players were focusing on promoting premium and super-premium variants. Iconic brands like Hendrick’s and Bombay Sapphire both gained share. Super-premium products such as Eurowine’s G’Vine Floraison also performed strongly.

In addition, the growing popularity of cocktails helped to boost higher-end sales, with a growing focus on botanicals. Those seeking bargains were meanwhile more likely to switch from gin to economy vodka, aguardiente or dark rum. And so they did.

Sticking to its premium guns
Regardless of the hurdles, severe economic headwinds and a gloomy operating environment, gin manufacturers have shown a fittingly stiff upper lip in the face of it all. There is little doubt that if there is one vehicle driving growth of the category, it sports crystal-encrusted headlights and boasts retro handmade seats.

The emphasis on heritage, tradition and luxury has been overwhelming and can be witnessed in the plethora of launches making waves over the past year.

From Plymouth Gin’s current and upcoming educational campaigns and Beefeater’s winter and summer editions to small-batch offerings popping up in micro-distilleries from London to the Scottish isles, the industry has bought a one-way ticket to premiumisation.

The consistent support that varieties such as Tanqueray 10 and Beefeater 24 have been receiving is further proving the point. It appears to be working, to an extent. 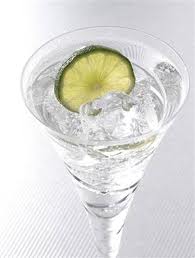 The skyrocketing popularity of brands such as Hendrick’s – boasting an enviable 42% volume CAGR over 2005-2010 – is a testament to the potential of such ventures even against a socio-economic backdrop that appears to be mired in post-recessionary gloom. Other distillers are only attempting to recreate a similar kind of buzz, although some are indeed moving further than that.

The problem is that creatively or critically revisiting a category’s flavour profile, production method or signature ingredients is a huge gamble. While gimmicks can potentially backfire – especially in a category so rigidly defined as spirits – taking risks with groundbreaking offerings can provide a boost to previously mature categories or expand audiences beyond their core, faithful but dwindling demographic.

In an ambitious move practically challenging perceptions – as well as the official EU definition – of gin, recently launched Hoxton Gin does not feature a traditionally prominent juniper flavour profile, replacing it with subtle scents of coconut and grapefruit instead. Where does innovation in a category end and creating a whole new one begin?

Already having secured a listing in Harrods as spirit of the month for May 2011, this latest irreverent launch is the brainchild of Gerry Calabrese, owner of trendy London bar The Hoxton Pony. Initially launched in the UK, the product involves six botanicals – coconut, grapefruit, ginger, tarragon, juniper and iris – while, in Calabrese’s words, it is designed to “introduce new people to gin”.

The product’s retail price in the UK secures it a prominent place in the expanding super-premium stable, while launches in Italy, the US, Russia and Spain are next on the list.

Euromonitor International expects gin to post flat total volume growth globally over 2010-2015. While the decline witnessed in Spain will be largely moderated, so will the upsurge seen in the UK. Volume growth in India is expected to remain anaemic at best or face a further haemorrhage. The US will continue – reluctantly – to embrace the category. So where should distillers focus?

Tapping into emerging markets would surely be the first and most obvious step on the industry’s agenda. Maturity and a perfect storm of austerity-driven abstinence in the vast majority of the category’s core markets do not bode well for future bottom lines. Taking into account that gin’s flavour profile is an acquired taste, this looks set to be a long-term process.

Lastly, premiumisation and heritage-embracing luxury is all well and good but taking into account the still precarious state of the vast majority of Western markets should also become part of the equation. After all, gin’s affordability and humble roots are what made it popular in the first place.