db dines at the palatial pleasure dome of Apsleys at the Lanesborough. 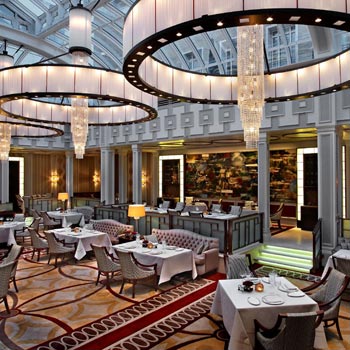 “Cookery is orderly insanity; cookery is life; which I taste in little, intense bites to relish it all,” head chef Heinz Beck tells me over an early morning coffee in his restaurant in The Lanesborough Hotel in London.

He’s about to catch a flight back to Rome, where he heads up the three Michelin-starred La Pergola, the first restaurant in Rome to receive such an honour, so our meeting is spitefully early.

Complementing the dramatic old masters mural on the far wall, Beck tells me he desperately wanted to be a painter. His father wouldn’t allow it, so he became a chef instead.

I suggest that cooking is an art form, and the resulting dishes often painterly in their presentation.

The week before I had dined under the same glass roof. The room is spectacular in its splendour. Designed by Adam Tihaney â€“ the man behind Thomas Keller’s Napa jewel The French Laundry, and more recently Dinner by Heston Blumenthal, the light and airy space is dominated by a trio of chandeliers that hover like calamari rings in suspended animation, while pencil-shaped bulbs dangle languidly mid-ring.

The capacious space is populated by a polite number of tables, all far enough apart to give the impression of privacy.

The cappuccino-coloured upholstery is plush, and the pillows plump. I could dine out on the visuals alone.

It took Beck a mere four months to earn his first Michelin star in London, which was awarded last January after the restaurant reopened post refurb in September 2009.

Despite Beck’s German heritage, the menu has distinct Mediterranean flourishes, while a number of the dishes are cooked sous-vide.

My companion and I opt to go Ã  la carte, bypassing the tempting tasting menu offering seven courses for Â£85 (or Â£125 with wine).

To start, a glass of Taittinger NV is served with a shallow bowl of luminous watermelon soup. 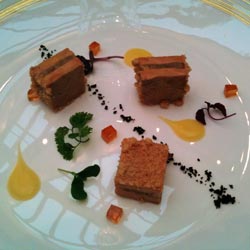 A pair of aubergine croquettes float on the surface like brown Dolly Mixtures amid razor-thin Parmesan shavings.

The fresh flavours cleanse and enliven my palate before the forthcoming flavour invasion.

Bread comes in the form of peach wafer-thin strips flecked with sesame seeds. Munching on the shards feels like eating strips of paint fallen fresh from the wall.

My starter is a work of art. Three fudge-like cubes of foie gras terrine with smoked apple and amaretti lie like building blocks among a foie garden composed of orange cubes, chocolate soil and herbal hedges.

With a roof of amaretti crumble, decadent, Madeira-marinated squares are umami-rich and utterly delicious, both when spread across the accompanying brioche, and when popped whole in the mouth.

The marmalade-fueled JuranÃ§on wine match is inspired, its bright acidity cutting confidently through the fat.

Next, I bypass Beck’s signature dish, carbonara fagottelli, opting instead for the croissant-shaped tagliolini with lobster and almonds â€“ a dish I still dream about. 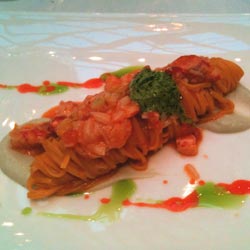 Served with a dollop of pesto on top and the lobster weaved throughout, it smells pleasingly of the sea.

The perfectly al dente pasta mixes with the lobster into a rich symphony of flavour, which is magnified by a vibrant glass of Greco di Tuffo; my new favourite grape.

As if deliberately trying to order the richest trio off the menu, my main is a quartet of suckling pig medallions coated in a golden layer of crispy crackling, served with a token sprinkling of mangetout. The pork is juicy, tender and comforting â€“ like a hug from the inside.

My companion’s black cod, while lacking the sweet miso I so enjoy about the dish, is served with a top layer of powdered Spanish ham, lending it a salty savouriness.

It meatifies the fish, which I like, but its intense, bacon flavour overpowers the dish, leaving the humble, fall-off-the-fork cod shivering in the shadows.

My accompanying wine, a 1996 Poderi Colla Barbaresco, is dusty and brooding, with fine-grained tannins. The fruit, having receded into the background, has paved the way for savoury cedar flavours.

My companion’s Franz Haas Pinot Nero is as bright as a ruby and alive with vibrant red fruit â€“ raspberries and cherries abound. I’m tempted to switch glasses.

The culinary adventure ends with the “Crunchy”, a biscuit-based diamond with a dulce de leche filling and rasberry jam lid, served with a scoop of yoghurt ice cream and a pair of edible lilac flowers.

Tangy, zesty, salty and sweet, it ticks all the flavour boxes and yet leaves me deflated.

All the elements are there, but the whole is an anticlimax. The wine match however, an unctuous, cassis-fuelled 2007 G. Allegrini, Recioto della Valpolicella Classico, doubles as a dessert.

Apsleys has much to recommend it â€“ the palatial space is the most beautiful public dining room in London. Service is attentive but unobtrusive, while the food is extravagant, yet leaves you pleasantly satiated rather than trouser-poppingly full. There is a thread of freshness running throughout both the food and the wine that lends the dishes life â€“ the flavours dance across the palate. If cookery is life, then Beck’s plates have a heartbeat.