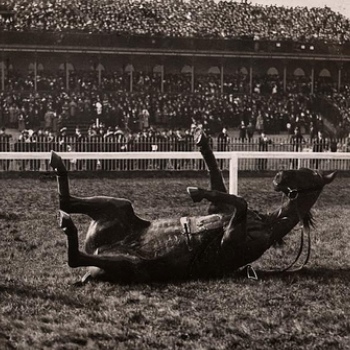 Pétrus, Mouton Rothschild and Juan Péron’s Champagne provided some light relief but it was the chance to see how similar lots have progressed in both pricing and results that was most interesting.

Meanwhile, there was a large collection of Cheval Blanc spanning the years 1986 to 2004. A great many of the bottles were large format with no fewer than 21 lots of double magnums – with two to three bottles per lot – five Jeroboams and a staggering 55 imperials.

However, Cheval Blanc showed again that it does not appear to be auction friendly with most lots either barely surpassing their high estimate or falling well within.

Once again this calls into question Cheval Blanc’s potential as an investment wine and raises serious doubts about the wisdom of releasing 2010 at over €800 a bottle. Will anyone make any money back on it?

At Bonhams, a half bottle of Perrier Jouët believed to have belonged to former Argentine president Juan Péron sold for £100.

Meanwhile, a vertical of Mouton Rothschild spanning 1945-2004 and a case of 1988 DRC showed how the auction world has moved on since last year.

First the Mouton collection. On 22 September last year, Sotheby’s sold a vertical of Mouton from 1945-2003.

At the Bonhams auction last week (7 July), a very similar vertical was sold for £52,900. It marked a small jump in price but the bottles in this collection had, according to the report, a far higher proportion of spoiled caps and labels and greater ullage. Nonetheless, the asking price this time around was £40,000-£50,000.

The fortunes of DRC, as epitomised by the cases of 1988 Romanée-Conti apparently doing the rounds, are more interesting. On 25 March last year Bonhams sold a rare complete case of Romanée-Conti sourced from a private French collection. Valued at £35,000-£40,000 it sold for £42,550.

That is a very small case study and does not take into account similar cases that may have turned up in New York or Hong Kong.

Does it however, say more about the fortunes of DRC as an increasingly investable brand? Or the overall fortunes of Burgundy that seem to be on the rise?