Why a top Chianti estate is embracing Cabernet Franc

Chianti Classico property Tenuta di Arceno has turned its flagship wine into a pure Cabernet Franc, as the estate puts its weight behind this French grape for the long term.

As part of a wider move towards crafting single varietal wines from the Tenuta di Arceno estate – a 1,000 hectare property with 92 ha of vineyards in the hilly landscape of Chianti’s Castelnuovo Berardenga – the producer’s priciest expression, a Toscana IGT called Arcanum, has become a varietal Cabernet Franc.

It started with the 2016 vintage, and occurred by chance, but has continued with every subsequent wine made for the $100 Arcanum label, which is currently selling a pure Cabernet Franc from 2017, although the previous vintage is still available.

Meanwhile, another fine expression from the estate, called Valdorna – which is also a Toscana IGT – has moved from being a Bordeaux blend to a single varietal Merlot, starting with the 2018 vintage, and employing only the oldest and best blocks of this grape. Meanwhile, Tenuta di Arceno’s top Chianti Classico, the Strada al Sasso Gran Selezione, is a pure Sangiovese.

Arcanum was launched with the 2008 vintage as a mix of around 70% Cabernet Franc, with the rest comprising Merlot and Cabernet Sauvignon, and then, more recently, Petit Verdot too.

But in 2016, when the blend was being compiled from lots of wines from across the estate, tasted blind, it emerged that the chosen components were all made from the same grape.

The selection had been made by Pierre Seillan, the Bordeaux-based vigneron for Jackson Family Wines, which owns Tenuta di Arceno after the late Jess Jackson and Barbara Banke purchased the property in 1994.

Seillan, who oversees the wines for the group’s Saint-Emilion estate Château Lassègue, and the flagship Sonoma brand Vérité, also visits Tenuta di Arceno on an annual basis to work with its resident winemaker, Lawrence Cronin, on the blends.

Commenting on the shift to making Tenuta di Arceno’s top wine a varietal Cabernet Franc, Cronin said that while it occurred by accident, rather than by design, the property had been planting increasing amounts of the French grape due to its suitability to the area. 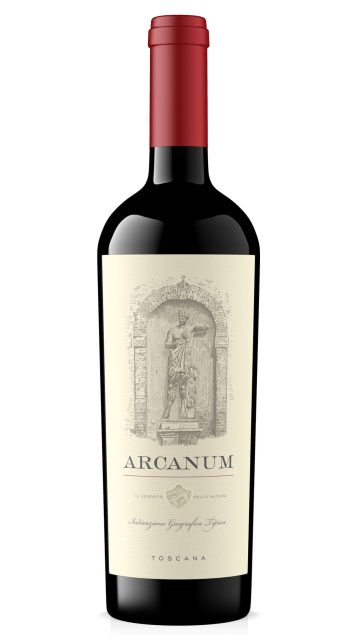 Having moved from the US to Italy to take charge of the winemaking at Tenuta di Arceno in 2002, Cronin told db this week that it was “logical” to go towards a pure Cabernet Franc, having increased plantings from 2ha when he arrived at the estate to 17ha today.

Not only that, but with the Cabernet Franc planted in 12 sites – which encompass different soils and elevations across the vast estate – despite Arcanum now being made with a single grape, the wine can retain complexity through different vineyard expressions.

As for the philosophy behind moving to varietal wines, Cronin told db, “We wanted more of a direct line between the wine and the vineyards.”

In terms of Cabernet Franc specifically, he observed that it’s a grape that seems particularly well adapted to this southern end of Chianti Classico, responding well to more variable weather patterns in the area.

While the earlier ripening Merlot can suffer from excessive alcohol levels due to heat waves, and Sangiovese is susceptible to drought, Cronin said that Cabernet Franc seems to cope with climatic extremes relatively unfazed.

Indeed, he said that the grapes from this year’s harvest, one of the hottest and driest on record, produced some of the “best tanks I’ve ever seen,” adding, “We have some postcard lots.”

Tenuta di Arceno in fact produce three Toscana IGT wines, with Arcanum and Valdorna joined by a further label called Il Fauno, named after a sculpture on the estate (pictured below), which depicts a figure with the body of a human and the legs of a faun.

With the former two wines now single varietal expressions, Il Fauno, which was always a mix of French grapes, led by around 50% Merlot, along with Cabernet Franc, Cabernet Sauvignon and Petit Verdot, will remain a blend.

And this wine, which is the least expensive of the estate’s Toscana IGT labels, will benefit from the grapes that are no longer being used in the other two pricier expressions.

“Il Fauno will no longer be a baby ‘Super Tuscan’, but the real thing,” he commented. 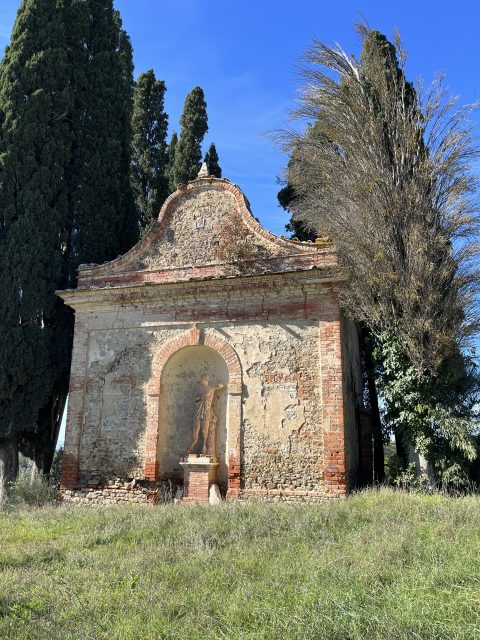