This year marks the 25th vintage of Chile’s Almaviva wine. At a masterclass in London, the brand’s winemaker and commercial director told a group of buyers and journalists why the latest offering is so special. 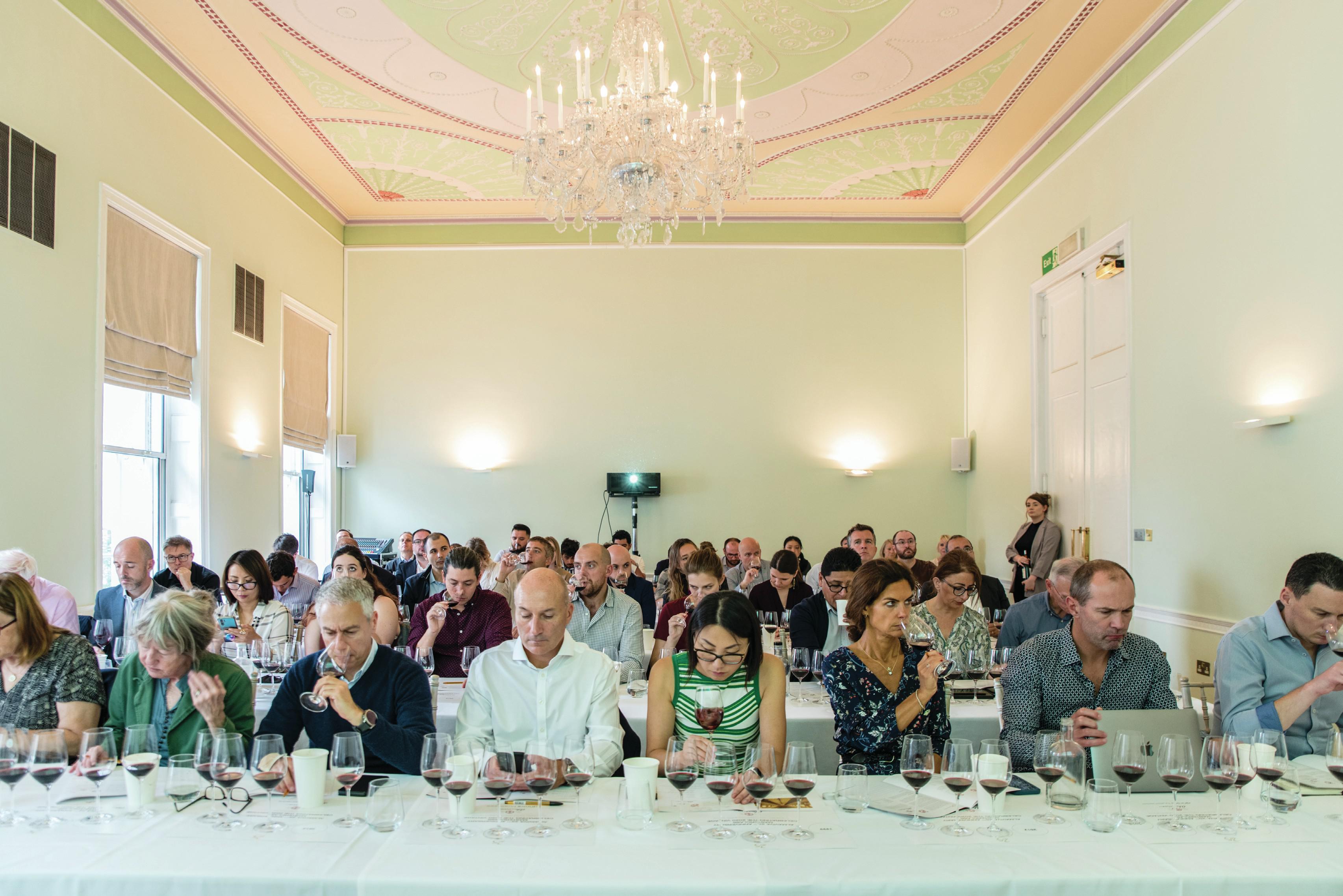 RECENTLY IN London, a milestone vintage was launched for an increasingly sought-after fine wine. That wine was Almaviva, and the release hailed from the 2020 harvest, the wine’s 25th anniversary since its inaugural 1996 vintage. It’s been an impressive rise to fame for a brand created in the high-altitude vineyards of Chile’s Maipo Valley a little more than a quarter of a century ago. And Michel Friou, Almaviva winemaker since 2007, along with the brand’s commercial director, Felipe Feliú, had come to London to tell the brand’s story to a packed room of press and buyers, as well as discuss the character of the producer ’s latest release.

As Feliú told the attendees, who had gathered at Asia House on 13 September to sample the anniversary wine, Almaviva was jointly established in 1997 by Baron Philippe de Rothschild, of Château Mouton-Rothschild, and Concha y Toro, Chile’s biggest wine producer.

Their aim was to create the first Bordeaux Grand Cru Classé equivalent in Chile using grapes from the best Puente Alto vineyards – an area of the Maipo Valley that over 20 years ago was recognised as offering ideal conditions for growing the Cabernet Sauvignon grape. The result has been “extremely successful”, according to Feliú, who said that the 2020 vintage, which is sold by French négociants to the trade through La Place de Bordeaux, had sold out in a matter of hours, as had Almaviva’s ‘second wine’, EPU. With both wines released, as they have been in the past, on the first Wednesday of September, such a sell-out was made more remarkable if one considers that Almaviva is produced in fairly large quantities for a top-end wine, with around 200,000 bottles crafted in a year like 2020, augmented by a further 65,000 bottles of EPU. 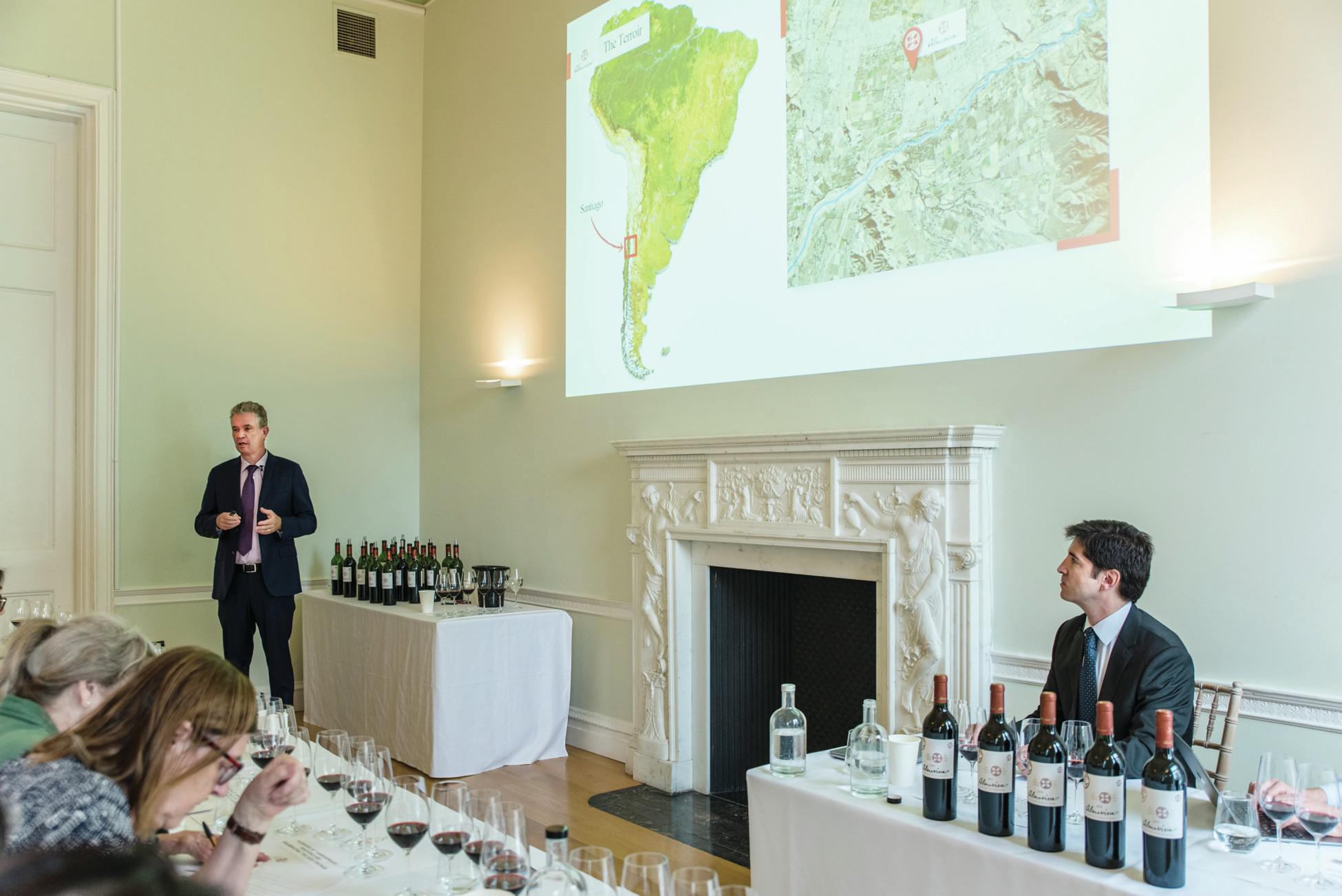 Marking out Almaviva among competitor Chilean Cabernet blends, stressed Feliú, is the fact that the Rothschild family wanted to “replicate the château concept of France in Chile, and create only two wines – afirst and a second wine – from an exceptional terroir”, he said. He stressed that the vineyards, the cellar and the commercial side to Almaviva are all managed by dedicated teams. “Everything is orientated for Almaviva and EPU,” he stated, noting that the second wine was one third the production and price of the grand vin. As for the anniversary vintage on show that day, Feliú said that subtle alternations had been made to Almaviva’s label to commemorate the year. “We have made some slight changes for the 25th vintage, including adding ’25 years’ to the label and capsule, and embossing the name, Almaviva, on the bottle – which we will continue to do.” 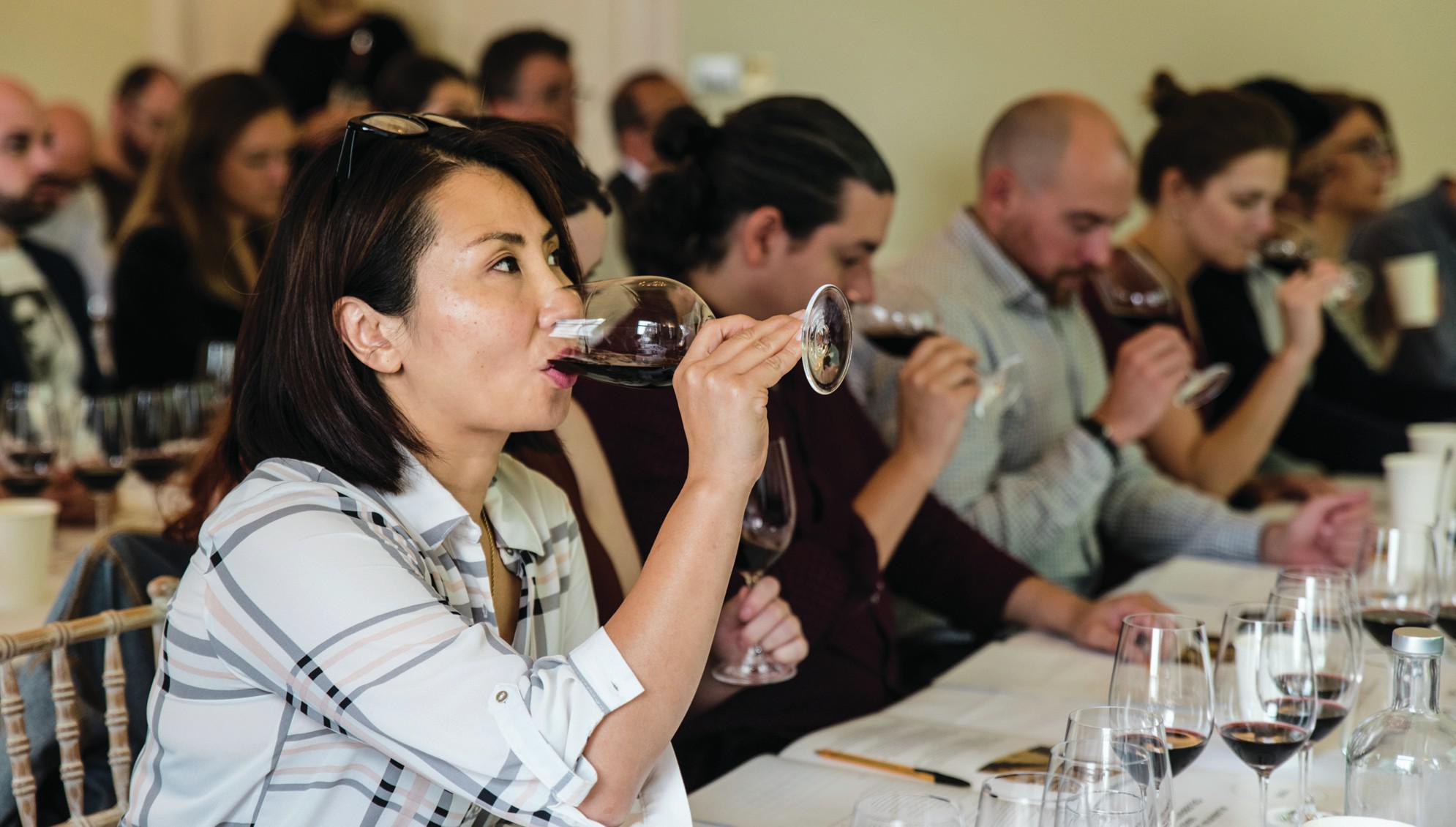 At this point, Friou introduced the wines, which comprised not just the 2020 vintage, but a number of older expressions direct from the winery, which included 1999, 2012, 2016, and 2018. “We are going to look at five vintages of Almaviva, taking us back almost to the beginning,” he said. Uniting all of them is the place, which Friou said was a site “in the middle of Chile, close to Santiago, in the high part of the Maipo”. As one of the great terroirs for Cabernet Sauvignon, he compared this area, Puente Alto, with others in the world. “Pauillac is on the famous 45-degree latitude north, Oakville [in Napa] on the 38thand we are on the 33 rdsouth in Puente Alto.” Having pointed out this difference, he said that average temperatures in all three places were similar, but rainfall quantities and patterns differed. “Pauillac is a traditional oceanic climate, which means it rains most of the year,” he said, recording an 870mm annual average over the past 40 years.

While this total is similar in Oakville, the latter area is Mediterranean in climate type, meaning that the rainfall is concentrated in winter and spring. On the other hand, Puente Alto is a “semi-arid Mediterranean climate”, where “vines would not be able to survive without irrigation”, with rainfall levels now extremely low – falling from a 340mm average over 40 years to around 200mm in the past 10, and just 130mm in the past five. The other difference in the Chilean region compared with Bordeaux or Napa concerns the altitude, with Puente Alto located at around 630m above sea level, and Oakville and Pauillac at 50m and 30m respectively. The high altitude of Puente Alto, situated beneath the steeply rising Andes mountains, is important, with Friou saying harvest-time temperatures in this part of Chile are cooler than in the other famous Cabernet regions he used for comparison’s sake.

This is because, he said: “We have cooler nights in Puente Alto, as we have winds from the snowy mountains from the end of the day that moderate the temperatures,” noting a 20ºC variation between day and night. This also ensures there is a long, slow ripening period in this part of the Maipo Valley, with the period between veraison and picking lasting as many as 90 days, compared with around 45 in Pauillac.

Friou then moved away from climatic influences at the Almaviva estate and on to soil type. Noting that the property is located on one of the “oldest alluvial terraces on the Maipo”, he said such a position ensured a higher clay content in the soils, which helps with water retention, and the production of “more complex and better wines”. 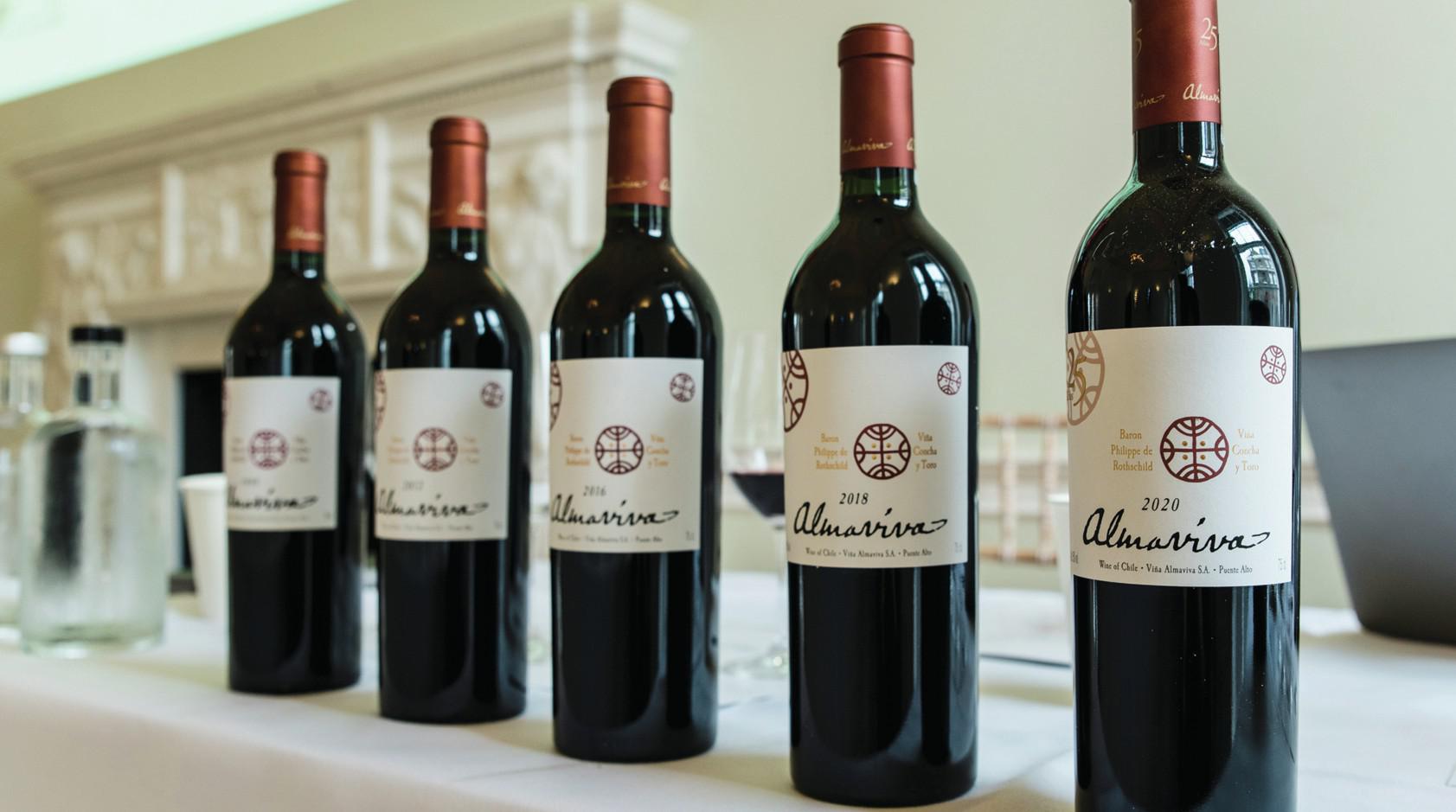 By measuring the electrical conductivity of vineyard soils at Almaviva, Friou has been able to accurately map any variation in nutrient availability, giving him a detailed understanding of differences in vine vigour, which influence how to manage the plants according to their needs, as well as when to harvest different parts of the estate.

Vinifications are then made “plot by plot”, using small stainless steel tanks, before the wines are aged in French oak for 18 months, with around 70% of it new (although EPU spends 12 months in barrels, with 10% of them new in the 2020 vintage).

Almaviva’s vines, on average, are around 28 years old, with some planted over 40 years ago, but others 20 years ago, with the most recent plantations done around five years ago. While there is a core of 40 hectares of mostly Cabernet Sauvignon that was planted piè franco in 1978, the Almaviva estate has since more than doubled the size of its property to 90ha of vineyards, with most of the newer plantings – amassale selection – on rootstocks.

Nevertheless, Friou said at the London event: “In the past two or three years we have planted without rootstocks again, because we have found that the vines are more resistant to drought, and produce better results,” referring to the quality of the resulting wine. 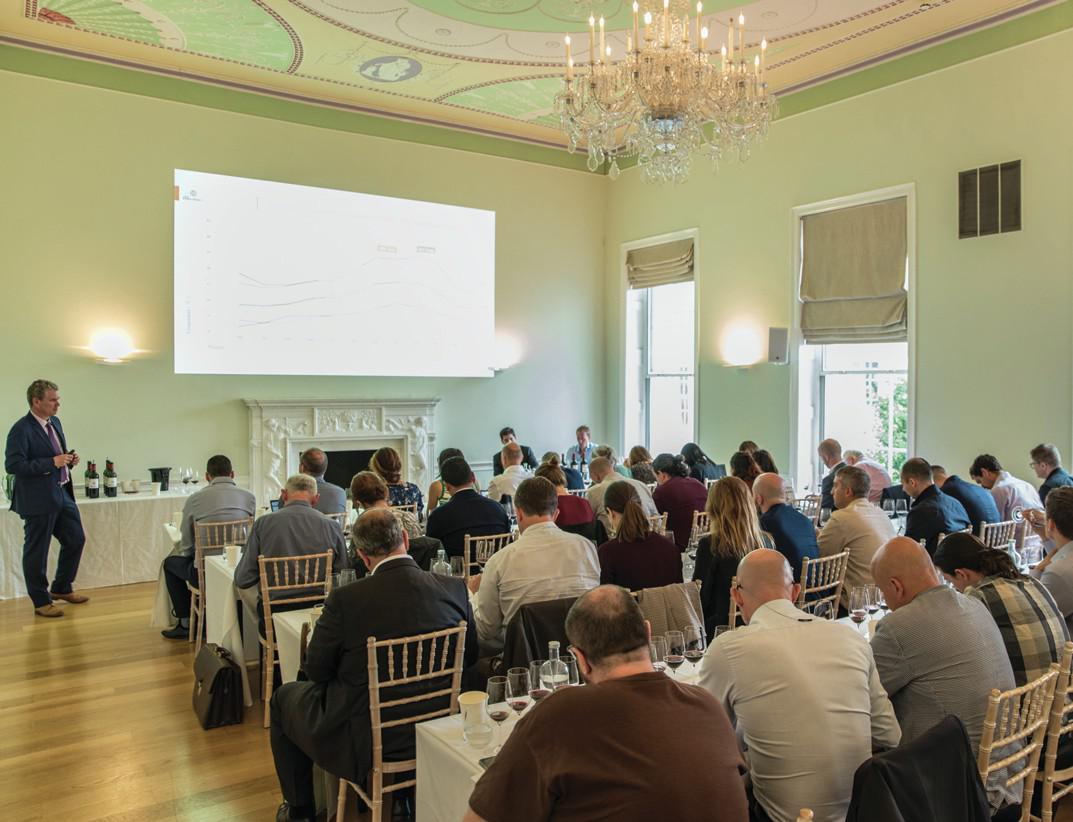 As for the grape varieties in the soil today, the property is dominated by Cabernet Sauvignon, with a proportion of Carmenère, Cabernet Franc, Merlot, and Petit Verdot, although Friou said he was using less and less Merlot, which can bring “rough tannins” when not fully ripe, or, in contrast, can easily become “jammy” if harvested later, or following an especially warm growing season. While Cabernet Sauvignon makes up the majority of the blend, the addition of Carmenère – Chile’s emblematic grape – not only gives Almaviva an important point of difference from other Cabernet blends from around the world, but also a beneficial textural element, bringing “soft and velvety tannins” to the wine, as well as a touch of spice.

As for the latest release, Friou said it was “a fantastic vintage to celebrate our 25th anniversary”. Following a dry, hot spring and summer, picking started “earlier than usual”, he said, before noting that this was also “an unusual harvest” because the grapes started to be brought into the winery “just as Covid was arriving in Chile”. He explained: “Clearly, this obliged us to harvest earlier and faster than usual, and, finally, this was good, because we had a high concentration of sugar in the berries, and, had we not been obliged to go faster, the last batches could have been overripe.”

Having tasted a range of great expressions of Almaviva, which proved the wine’s ability to develop greater complexity with age, Friou was asked by an attendee to name his favourite year. “I love the balance of 2018, but I love the body of 2020, and as I’ve learned over the years, the best vintage is the last one,” he joked, “because that’s the one you have to sell.” Then, on a serious note, he said: “The 2020 is full, and it has structure, so it is delicious now, and it will age very well; it is a wonderful way to end.” 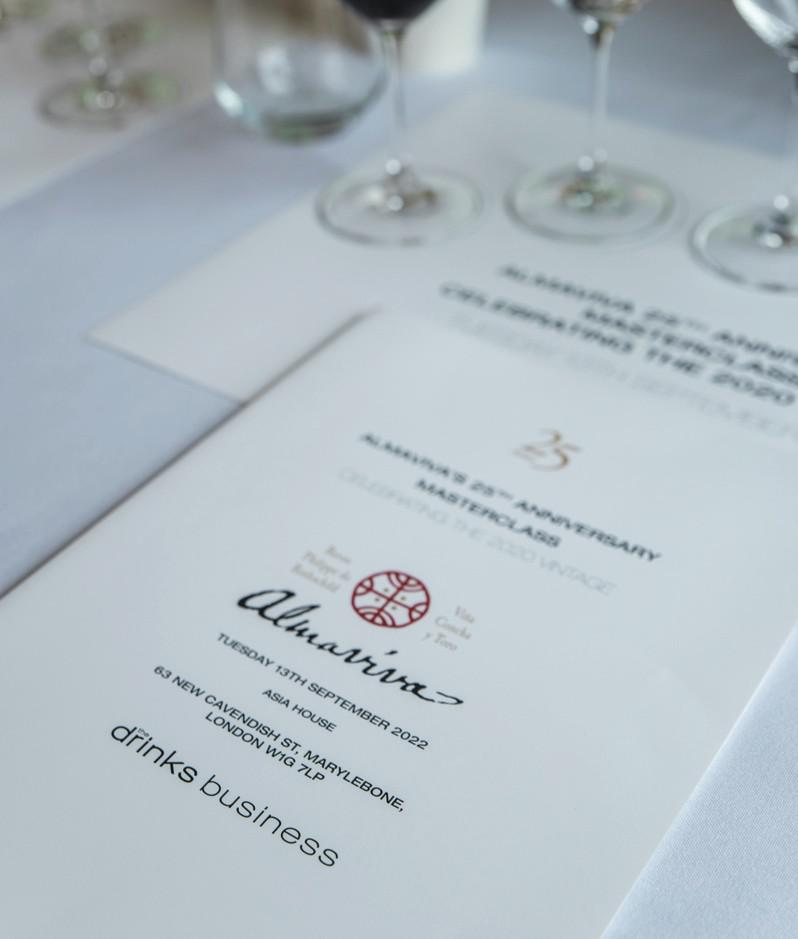 Almaviva released its 2020 vintage – its 25th anniversary bottling – onto La Place de Bordeaux in September, with critics declaring it “already delicious” but also likely to improve with age.

The wine has a score of 96 points from The Wine Advocate’s Luis Gutiérrez, who noted that the 2020 has a “similar aromatic palate” as the 2019, “with a clear note of baked peppers”, and although more tannic, there is more tension than the powerful 2017 vintage.

The 2020 vintage was an exceptionally dry one, with 75% less rain than usual between May and September, resulting in an earlier harvest – and although the Carmenère was picked nearly five weeks earlier than usual, Gutiérrez said it was “not a green wine at all”.

Meanwhile James Suckling awarded it 98 points, describing it as “voluptuous and flattering on the palate”, a medium-to full-bodied Almaviva “with supple, silky tannins and a wealth of black and blue fruit that provides a lot of charm now”, although noting that it would be “better from 2024”.

The 2020 Almaviva is a blend of 68% Cabernet Sauvignon, 24% Carmenère (from Peumo), 6% Cabernet Franc and 2% Petit Verdot – with no Merlot included this time. “The process was as careful as possible, without using any bombs, doing manual and optical sorting of the grapes, pressing in small vertical presses and ageing of 20 months in French oak barrels, 73% of them new and the rest second use,” Gutiérrez noted. “The wine reached good ripeness with 14.9% alcohol. It still shows the effect of the élevage a bit, with abundant notes of sweet spices, a creamy touch and some smoke.” Almaviva’s second wine, EPU, which comes from the same terroir and vineyard in Puente Alto, but from younger vines that are harvested earlier to preserve acidity and fruit, was also released, marking its second outing on La Place.