Cru Bourgeois du Médoc is looking at extending to new formats such as Bag-in-box for its wines, as well as more climate resistant grape varieties that will combat the challenges the region is facing. 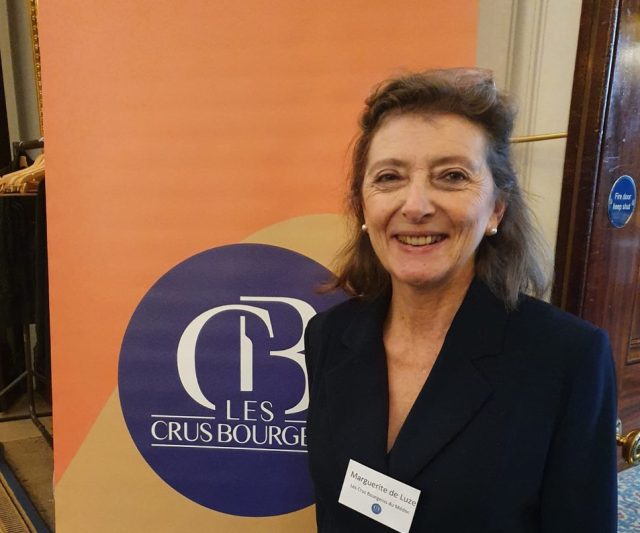 The new classification system – which is awarded every five years and consists of three categories: Cru Bourgeois, Cru Bourgeois Supérieur and Cru Bourgeois Exceptionnel – was announced in February 2020, but the team are now looking towards the next classification in 2025. This is focussed on boosting the environmental and sustainability aspect of the classification, according to Marguerite de Luze, owner of Chateau Paveil de Luze in Margaux, and a member of the board of Cru Bourgeois du Médoc. By 2025, each chateaux will have to be certified with the sustainable winegrowing High Environmental Value (HVE), an enhancement on last year’s requirements.

“Last time you had to be just working towards it,” Marguerite de Luze for Cru Bourgeois explained.

This is all part of constant improvement and tightening up of the classification which rates consistency and quality of a chateaux’ wines.

“The first thing of the classification is the quality, it’s been tasted for the last five vintages, it is checked during classification years and retested in the following five years,” she explained. “In 2025, the main step is societal and working with the members, so we organise meetings with the members to share their experience and feedback in order to implement the best practises.”

Consistency is key, she points out – particularly for chateaux moving into the higher tiers, Cru Bourgeois Supérieur and Cru Bourgeois Exceptionnel.

The last few years have not been without challenges, and this is reflected in the rules. For example although each chateau is tested for five vintages, previously they could submit wines from a ten year period, for the 2025 classification, this has to be a five year period 2017-2022. However, chateaux are allowed to submit one replacement vintage from the previous five years if they suffered from a weather/climate related problem such as hail or frost.

“Some chateaux lost everything through frost and hail, so we can’t penalise them for not having wine that year,” she explains. “If the château suffered a climatic incident – and only in that case – the missing vintage can be replaced by the 2016 vintage. If they lost two vintages, then it will be 2016 and 2015 vintages for replacement.”

However, the outlook for 2022 bodes well in terms of quality, even if yields are down.

“We expect a great vintage from 2022, despite the dryness,” de Luze said. “The volume will be reduced in the Medoc because of a lack of water, but we some had rain before picking which was great as the grapes were plumped up a bit, although some didn’t.”

She estimated that there may be a reduction of around 30-40% in terms of yields as a result of the drought between May and September.

“We will be obliged to restrict the allocations, so everyone can have some. It will be an historical vintage,” she said.

And winemakers are continuing to innovate, including conducting trials with smaller glass barrels and tanks and amphora, as well as looking at new climate-adaptable grapes. This follows the decision in January 2021 that the Bordeaux and Bordeaux Supérieur appellations would allow grapes varieties such as Touriga Nacional, Marselan, Castets, Arinarnoa, Alvarinho and Liliorila. The naturally high acidity, resistance to mildew and later bud burst of these varieties helps offsets  the risk of spring frosts, making them ideal vines to counter the threats posed by global warming on some of the region’s more traditional varieties.

Currently using them would result in the wines being declassified, however a decision on whether to add these to the official specifications of Cru Bourgeois has to be quick, de Luze argues. ” When you grow vines, you have minimum of three years to establish the vines and then 10 – 15 till they are at the peak, so you need to think long-term. Plus you have to know how it will affect the taste, so it needs lots of tests.”

It is something that is currently being mulled, with the organisation body also looking at alternative formats and whether to allow Bag-in-box. The reasons are two-fold, both environmental but also practical, in the face of increasing cost and the reduced availability of glass, as well as potential consumer demand.

“Nothing is decided yet, but it is something that maybe we can look at in a few years,” de Luze says. “We are looking at it now but it takes time – first we have to see if the members are willing, then we have to change the text of the specifications.”

The next window of opportunity would be the 2025 classification, however she argued that the 2030 classification provided a more realistic timeframe.

“2025 would be too soon, as it is a move that is tied to the French government – and the door to own the – but we could try to put it together for next classification,” she said.