Pernod Ricard has said it has a “duty to lead” sustainability and discussed plans to drive its “ethical consumerism” journey globally.

Speaking at an event in Cannes during the TFWA World Exhibition & Conference, the drinks business heard from the drinks giant on its plans for a sustainable future at a fireside chat it hosted at The Majestic, led by behavioural science expert Phillip Adcock.

Melanie Guilldoum group EVP Foodservice & CSR at Lagardère Travel Retail said: “We have commitments that are shared globally by all our teams. If you look at our product strategy, we all share the same goals and we will do exactly the same things within our country.”

Joanna Yarrow, founding partner at M&C Saatchi Life agreed that working together was the way forwards, as well as being upfront about transparancy. She pointed out “we are all sitting facing the challenges when it comes to climate, especially for the next year and so on”.

Yarrow explained that even though the world is in a bit of turmoil right now, people want to do things to make some positive changes and that companies and brand owners can help play their part in this. She observed: “What we’re seeing when we look across markets is that there is far more that we have in common on this agenda than what distinguishes us. I’ve been working with a global insights organisation called Globescan for the last five years, we’ve been running longitudinal surveys across 31 different markets, year-on-year asking a cross section of people, particularly around climate change and around sustainability issues, ‘what that sections are’, ‘what they care about most’, ‘what their motivations to change are’, and also ‘what the barriers are’. Really, the headline of this year’s results, which will be out end of this month, show what I’m already seeing – that despite complex geopolitical instability, despite the cost-of -living-crisis, or levels of concern, there is a desire to take action”. 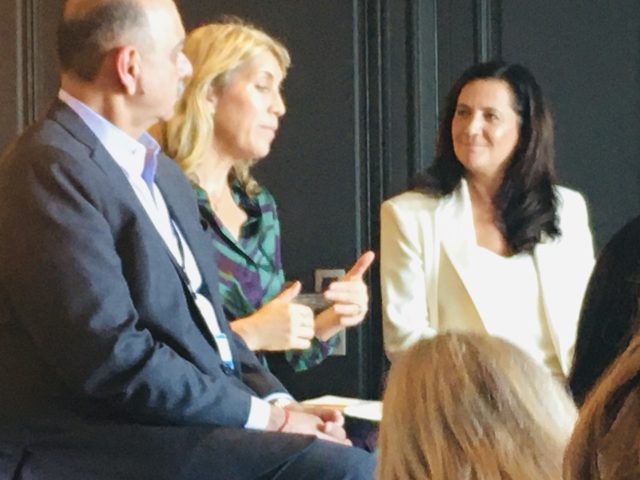 Vanessa Wright, chief sustainability officer at Pernod Ricard echoed this, highlighting how these statements were “some of the things that we’re seeing very clearly as well” and noted that “it’s very helpful because, actually, it [Pernod Ricard] is a very decentralised organisation” and yet “sustainability is probably the first topic in the group that actually became quite centralised”. She explained that nuance was everything and that market-to-market there were goals to strive for each location. She revealed: “We’ve got 20-30 targets, there’s probably more than 30 of them on reducing our carbon emissions on improving what we’re doing around our waste and circular etc, but also we recognise how, because of the differences in different countries, we have to allow some nuance in terms of what’s most relevant within those markets, and certainly also how the brands communicate to consumers who have a different mindset”.

According to Wright, drinks companies need to get better at not needing to show they know everything, but simply by being honest and starting the process of doing better and seeing where it takes them because sustaimability and the planet were too important to ignore. Additionally, people trust other people who show their learning process and with that authenticity grows greater respect.

She explained: “When I first joined, I was saying ‘wow all these amazing things that we’re doing but we’re not talking about them’ and I understand the nervousness about talking before we’ve got there – but, actually, then you look at some of the things that we’re doing and I think when you have iconic global very powerful brands, there’s almost a duty to try and take some of these big global messages and communicate them and help take people on a journey with you. We are always learning and I think if you’re humble enough to say that then you will get trust from consumers.”