A new wave of Lambrusco has started to emerge from the shadows. From its ancient Etruscan and Roman origins to the red-cola wines of the 1980s, Italy’s famous red frizzante has evolved into a vibrant, crunchy and saline fine wine, according to Filippo Bartolotta. 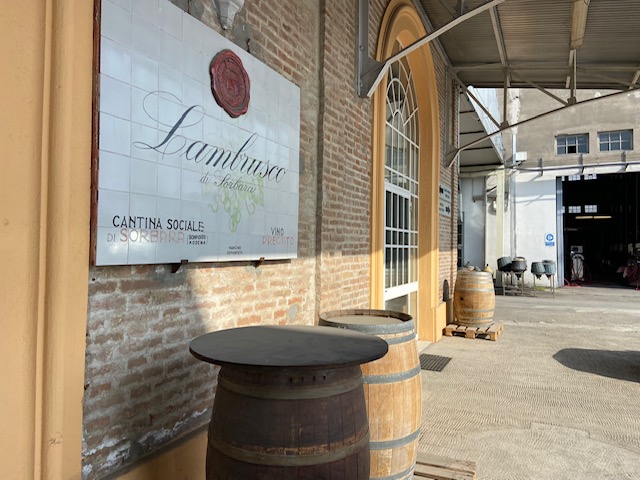 Genetically, the Lambrusco grape comes straight from the Labrusca wild vine that grew at the borders of the fields in ancient times, and there is evidence it was cultivated by the Etruscans. The name was coined by the Romans, a portmanteau from ‘labrum’ (meaning edge, or border in Latin) and ‘ruscum’ (meaning rustic, wild, spontaneous).

That history can still be found today. Starting my journey in the brand new winery of Marchesi di Ravarino, north east of Modena in the Emilia-Romagna region, father and son owners Angelo and Nicola tell me the four squares of 400m2 of vines located around the wine estate used to be training camps for Roman soldiers.

“The ‘Pianura Padana’ (Po Valley) used to be packed with Roman training camps, tiered down for obvious logistical purposes,” they explain. “In our estate they were kept standing thanks to a history professor, but we noticed our vineyards were growing with lower yields per hectare (around 10 tons) but with higher quality”.

This organic farm, which kicked off with the 2017 vintage, has taken a stand to produce only Metodo Ancestrale Lambrusco (the oldest way of making sparkling wine) in Magnum at €30 a bottle – a statement that claims Lambrusco deserves a better place in the restaurant fine wine lists all over the world.

I ask if their business model is working. “We have 100ha of organic prunes to sustain our business at the moment, but our allocations are sold out,” Angelo replies.

Their Lambrusco is 100% Sorbara DOC. A salmon pink fluorescent looking sparkling with some haziness coming from the refermentation in the bottle. 2.5 atmosphere of salty and grapefruit juicy driven wine with so much energy and a great finish.

It looks like it is a lot in terms of yield, but as icon wine maker Sandro Caviccchioli of Cavicchioli 1928 (now owned by GIV) notes that “if you drop too much fruit of Salamino or Sorbara, the alcohol is going to still all the elegance of these varieties away.”

Sandro has been making sparkling wine all his life and has a very clear picture of what Lambrusco can give out of any sort of fermentation.

“We produce metodo ancestrale, charmat method and traditional method Lambrusco – the secret is to bring home healthy and clean fruit,” he says, opening some 20 bottles for lunch and asking me what I think.

The bottle says Bellei Puro Nature 2013 Metodo Classico. It’s a dosage zero Lambrusco di Sorbara traditional method with quite a few years on the lees: citrus fruit, balsamic bergamot aromas, gunflint, orange blossoms and a reactive splendid acidity with a very lingering finish. An amazing spumante which in a blind tasting of the best sparkling of the world would get some serious recognition!

Carlo Cavicchioli, Sandro’s son says that people are often taken aback when tasting it alongside Champagne and famous traditional method sparkling in blind tastings, and I am increasingly convinced that Lambrusco di Sorbara will garner serious attention from sommeliers and collectors.

The Sorbara variety is the most fragile and transparent, releasing more and more vertical bone dry Lambrusco than ever. Given its sterility it is cultivated with Lambrusco Salamino -the Sorbara DOC wants a minimum of 60% Sorbara, up to 100% and a maximum of 40% Salamino.

One of the best vineyards for Sorbara and Salamino area is the Cristo vineyard where the river Secchia and Panaro are close together and the soils become sandier.  According to young (31) and talented winemaker director Daniele Artioli of Cantina di Carpi e Sorbara, 80% of the 10,000 hectares of Lambrusco are cultivated on the Pianura Padana clay and sandy super fertile soil.

The co-operatives in Emilia Romagna, which will turn 100 next year, are the heart and soul of the cultural heritage of this area, with more than 1,200 vigneron farming 2,000 hectares – and their wines are getting better and better.

“We are aiming to produce more contemporary style Lambrusco taking residual sugar off the chart and offering crunchier style wines,” Artioli says. “Of course we still produce some sweeter style Lambrusco for those markets with a sweeter tooth, but here in Modena and Italy people drink only the dry versions”.

Their Lambrusco Salamino di Santa Croce Secco at € 8.99 is a total bargain with some lovely violet, strawberry and crunchy plum flavours. 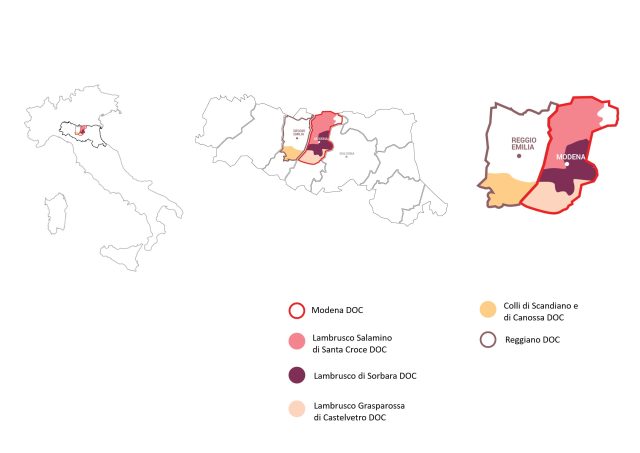 As the appellation rises to the first hills of the Appenini, the vineyards show a lower density and some rockier soils. On the Modena side there’s Lambrusco Grasparossa di Castelvetro DOC: a darker, more extractive style Lambrusco often balanced out with some residual sugar to contrast the tannic power. But, as in the case of Fattoria Moretto, Fabio and his son Alessio are keen on a ‘less is more’ approach. Their single vineyard Canova is a perfect example of how smooth, spicy and mineral Grasparossa di Castelvetro can be – and this wine is only €11.25″

“We keep the must in contact with the skin for two day period of time and the 7 tons/ha yields help us bringing home beautiful balanced berries,” Fausto explains.”

There is a new version which came out this year called Sbiadì Lambrusco Grasparossa di Castelvetro DOC. With only two hours maceration, it is a pink bright colour and is a great sapid citrus-riven fruity and refreshing Lambrusco that is  dangerously easy to drink.

“This is a possible future avenue for Lambrusco,” the Director of Consorzio Giacomo Savorini says, “a contemporary interpretation of an ancient wine”.

The Castelvetro hills are also home to a newly approved (unanimously) new sub-appellation or ‘sottozona’, called ‘Lambrusco di Grasparossa di Castelvetro Montebarello 115’, which will be from 2023.  “This new collective brand is there to promote the hillside organic only high quality Lambrusco,” the director says.

Heading west from Modena on the Reggio Emilia side of the Appenini, towards Parma lies the Lambrusco Colli di Scandiano e di Canossa DOC where the blend of four varieties of Lambrusco – Maestri, Marani, Salamino and Barghi – give life to some elegant dark driven style lambrusco with a lot of balsamic action.

This means that while in the Modena DOC Sorbara, there are lots of single variety vinifications, with Salamino and Grasparossa the main varieties, the Reggiano side it is more about the art of blending with varieties such as Maestri, Montericco Viadanese and Foglia Frastagliata offering structure and body while Marani, Oliva and Barghi bringing more softness, spices and roundness. There is usually a good presence of Ancellotta as well, to make things even rounder.

One extreme example of this art of blending can be found at Emilia Wine Miglio Lungo Lambrusco, where the wine is the result of 21 different type of Lambrusco. This wine has gun flint, cherries, sweet roots, leather and a vinous edge, but sells  for a little less then €10, making it a great buy.

A few miles away and I head for lunch at Venturini Baldini, the oldest Acetaia in Reggio Emilia and a heaven-like wine resort with two Villas and the Winter Garden restaurant in the middle of the forest. Julia, the Austrian owner, is completely dedicated to this venture. Her Lambrusco Reggiano Rosé DOC is the lightest and most uplifting example of Sorbara and Grasparossa blend I have ever tried – wild roses, pomegranate, citrus fruit and a refreshing mountain strawberry finish at am amazing value €15 price tag.

Alessandro Medici of Medici Ermete notes that in 1981, Lambrusco was one of the top ten wines sold all over the world, but the 1986 commercial crash of the sweet ‘red-cola’ style of Lambrusco made the wine virtually disappear from wine lists.

“My father in 1993 created Lambrusco Reggiano DOC Concerto, the first dry Lambrusco to be exported in the USA in 1994,” he adds. “But after so many years we are now an organic estate with small yields of not more the 100 tons/ha and our stock is always on the move.”

It is really refreshing to see this young generation so motivated – and Concerto is always one of the most reliable source of Lambrusco Salamino 100% with blue flowers, mulberries, orange peel and a vibrant finish.

Before I leave, Alessandro cracks open a bottle of super-ink florescent ancestrale Sorbara called Phermento, which comes from the left bank of Secchia river in the Sozzigalli area – a true grand cru. It has a Mersault-style flintiness, tons of redcurrant, lemons and pink grapefruit and essential oils, with amazing juiciness for 8€.

So here I am in the Reggiano side and yet drinking more Sorbara ancestrale.

Wine makers, wine lovers and wine critic seem to be in love with ancestrale and traditional methods and yet they account for only 2% of the production, while 98% is charmat.

I have to admit that I fell in love too. My first love was Paltrineiri Radice Lambrusco di Sorbara, a stunning example of wild roses, grapefruit pure juice, grapefruit seeds, propolis, passion fruit and sour cherries. Made in the traditional method by the expert hands of Cristian Bellei, Cantina della Volta is one of the purest Lambrusco di Sorbara Spumante Brut 36, a reliable source of vertical, salty and mineral wine with 36 months on the lees releasing a creamier edge then expected on the finish. And all of €25.

So is Charmat Lambrusco di Sorbara on the down side? Not at all. 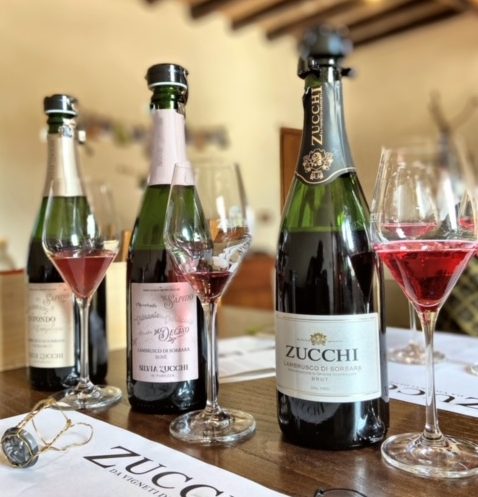 This method proved to be a revolution of the 1950’s. As young vigneron Silvia Zucchi points out, “We do not make ancestrale any longer. The bottled fermented Lambrusco is what my grandfather had to make because back then there wasn’t an alternative. But since the arrival of modern techniques we are now able to produce clean wines more respectful of the varietal aspect”. Silvia Zucchi Lambrusco di Sorbara Rosè DOC is a very cherry driven wine with a great strawberry froth, some lime juice and a floral finish for €16.99.

Another great player and steady reliable source of Lambrusco di Sorbara DOC Charmat is Cleto Chiarli ‘Premium Mention Honorable’ – a velvety and yet crunchy strawberry and sour cherry driven wine with an unstoppable drinkability at €9.

Also worth worth checking a new organic winery Cantina Venti Venti with the youngest team in the region (on average owners and employees are 23 years old): their Ventiventi Rosè Lambrusco di Modena Doc. This is a 100% Sorbara with an intriguing hazelnut, cinnamon and citrus complexity and a bone dry reactive finish at €19.

As this Lambrusco journey comes to an end, I realize how  high my scores went on Lambrusco di Sorbara. Yes I have also loved Salamino and Grasparossa as well as the Modena and Reggiano, but my heart was stolen by salty Sorbara. But no matter which Lambrusco you pick, try to get one that is a DOC and remember that these wines –  with almost 9 grams of acidity and a pH of 3.1 – are some of the world’s greatest food lovers regardless of whether that is a local dish of tortellini or Prosciutto di Parma or Asian and South American food.