Bruha has released a limited edition Heritage Pale specifically on cask to give pubs and bars nationwide ‘a nod to the past’ for the month of September. 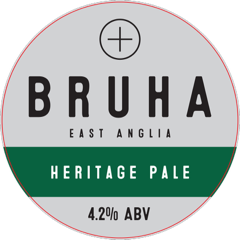 The 4.2% premium pale ale, made with heritage East Anglian malted barley, has been hopped with Cascade, Chinook and Citra, giving it aromas of citrus and tropical fruits with a balanced malty backbone.

Speaking to db, Bruha managing director Rob Breakwell said: “We originally made Heritage Pale to expand our cask beer offering. We had made a version of Session Pale in cask and it sold really well. We believe that making a beer using heritage ingredients probably needed to be served in the most traditional way. We also wanted to make something that was on-trade exclusive. Having said this, Heritage Pale is a thoroughly modern beer but with a distinct nod to the past.”

Breakwell added: “We are very excited to launch the Heritage Pale, which we believe will be a very popular choice for those looking to quench their thirst with a fresh and fruity ale this autumn. Heritage Pale is an easy to drink beer that is a great addition to our range of clean, clear and crisp beers.”

This year, beer fans in pubs will be raising a nonic glass to Cask Ale Week – the an annual of Britain’s national drink – cask beer, which takes place from the 22 September until the 2 October.

Cask Ale Week was originally formed in the early noughties by Cask Marque and is now supported by brewers and trade organisations as well as The Campaign for Real Ale (CAMRA).

Bruha’s limited release cask beer, Heritage Pale, will be available to the UK on-trade while stocks last, making the most of the week.