Scotland’s oldest working distillery, The Glenturret is releasing a 50-year-old whisky for the first time, the first decanter of which will be auctioned as part of Sotheby’s Whisky in Lalique auction. 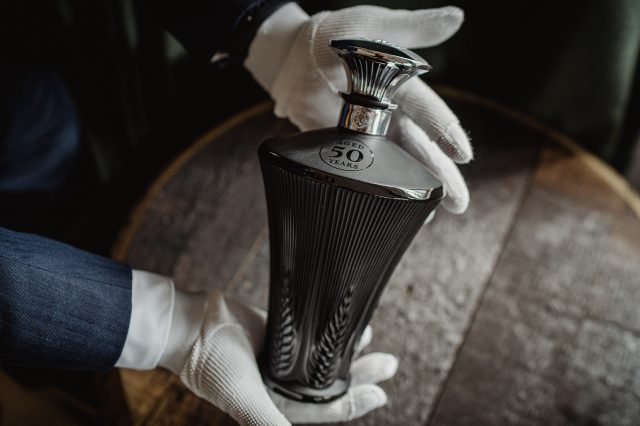 The Glenturret, based near Crieff in the Highland is producing just 150 bottles of the historic new expression, which will retail for £40,000 each.

The whisky comes in a striking, rare black crystal decanter – the rarest and most difficult type of crystal to produce – from Alsace-based crystal house, Lalique. It was designed by the French crystal house’s artistic and creative director, Marc Larminaux.

The motif on the decanter was inspired by barley and hand carved into the crystal by Lalique crftsmen to provide “a tactile smooth and frosted finish” that mirrors “the craftsmanship and skill that went into producing such an extraordinary whisky”, the company said.

The decanter comes in a bespoke black case with inlaid mother of pearl.

International auction house Sotheby’s will be auctioning off decanter number 1 of 150 as part of the Whisky in Lalique auction – the first whisky auction in history to exclusively offer Scotch in Lalique – which see online bids opens today, and run until 9 September. The lot includes one-off  artwork by Edinburgh-based artist Matthew Draper, called Loch Turret, which was commissioned by Method Studio, a one-off collector’s item created from pigments and inks made from charring and burning the 50 years old cask staves. The pre-sale estimate for the lot has been set at £40,000 – £60,000.

The whisky will also be available online from the distillery’s website from 12th September 2022.

The Glenturret is famed for its small-batch hand crafted whiskies, and as such has a genuinely scarce volume of whisky available, “making this expression a greatly coveted release for any serious collector”, the company said.

The whisky was drawn from a single remaining cask that was filled in 1972, having spent the last five decades maturing in a refill Sherry cask, giving the whisky an antique oak colour. The tasting notes referred to “sweet aromatic candy” on the nose, with “hints of fresh apple and warm honeycomb”, with “subtle green oak, syrup sponge, dates and dried prunes lightly coat the mouth, and a slight touch of aniseed” on the palate.”

The Glenturret’s managing director, John Laurie, said it was “incredible” to be releasing the distillery’s first ever 50 Years Old expression in partnership with “the extraordinary creative talents” of Lalique, Method and Matthew Draper, whose “values both mirror our own philosophy when it comes to craftsmanship and the importance of making things by hand”, he noted.

“The result is a rare and unique collector’s piece, and the work that has gone into this project really does justice to the remarkable liquid that can be found inside.”

Johnny Fowle, Sotheby’s head of whisky & spirts North America and EMEA said the whisky represented “much more than just the depth of history at this distillery”.

“It is an opportunity to be the first to collect The Glenturret’s rarest bottles and the only opportunity to acquire the accompanying art piece made from the barrel itself,” he said.