New Japanese restaurant and bar Koyn to open in Mayfair

London’s Mayfair will soon see a new modern izakaya open its doors – the Japanese take on the tapas bar or gastropub. 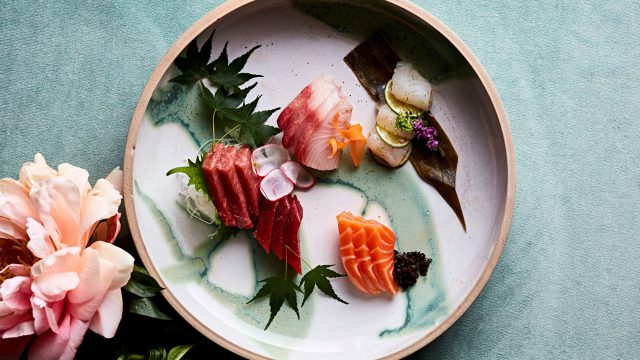 Koyn, which opens on 9 September, is the fifth restaurant from father and daughter duo Samyukta and Dinesh Nair, whose LSL Capital also owns MiMi Meifair, Michelin-starred Jamavar, Bombay Bustle and Socca, a Southern French, Mediterranean-style restaurant in collaboration with Claude Bosi that is due to open this summer.

Izakaya, which can be found everywhere in Japan, is a word made up the of characters or kanji for ‘stay-drink-place’, and is traditionally a place to have a drink (traditionally beer, sake or whiskey) and a variety of dishes with friends.

The new venue says it is inspired by Japan’s ancient appreciation for simplicity and harmony and will comprise a contemporary dining experience inspired by Japan’s enigmatic volcano, Mount Fuji, where “a lush alpine environment peacefully co-exists with the fires raging below”.

Samyukta and Fabled Studio’s Tom Strother have designed the two-storey space “to symbolise the complementary forces at play in the ancient volcano”, they say, reflecting “the balance between calm and volatile energy”.

The green Midori room, on the ground floor is inspired by the landscape of Japanese zen gardens and the striking pink moss growing on the fertile volcanic soil of the snow-capped peak. It houses the marble Verde Cipollino boutique sushi bar, which is backed by an illuminated mirror skyscape.

This calm room has been designed to contrast with the charred Magma room below it, which represents an active, bubbling volcano. This will feature a traditional binchotan-charcoal-fuelled robata grill, made from black slatted timber and rainforest marble and lined with burnt orange leather stools, where guests can sit close enough to the flames to feel the heat.