A maze of tunnels hollowed out on either side of the river to anchor NYC’s famous bridge once housed “the choicest wines in New York City”. 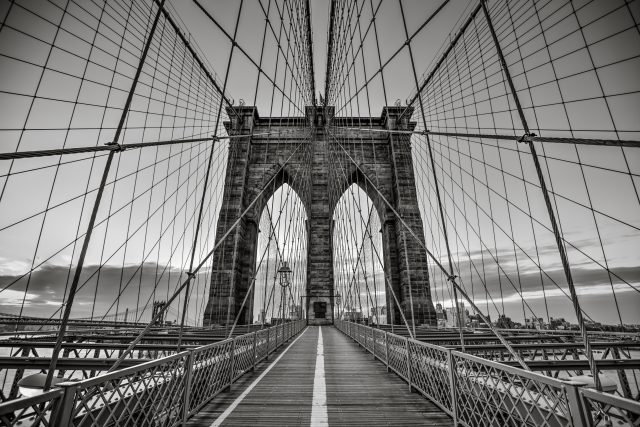 Built between 1869 and 1883, Brooklyn Bridge was the world’s first steel suspension bridge, an impressive feat of engineering. However, with construction estimated at around US$15 million, it was not exactly cheap to build.

John Roebling, one of the brains behind the bridge, realised that in order to anchor it on either side of New York’s East River, deep tunnels would need to be carved into the limestone banks to support the bridge’s weight.

As non-profit publication NPR first reported, if the City of New York could develop these tunnels and rent them out, it could offset the rapidly rising cost of building the bridge.

Unsurprisingly, this proposition caught the attention of a number of wine merchants who fancied the tunnels for storing their liquid goods. The likes of Luyties Brothers and Racky’s Wine Establishment were some of the first to claim segments of the tunnels.

City records indicate that in 1901, the “Luyties Brothers paid $5,000 for a vault on the Manhattan side of the bridge.”

But it was in 1934, the year after Prohibition was lifted, that Anthony Oechs & Co. moved into the Manhattan-side tunnels with his cache of wines and used them to turn a hefty profit. Signage for Oech’s business can still be found in the tunnels today.

The design of the bridge allowed for two wine cellars, one on each shore, along with several other vaulted chambers.

According to archived clippings from the Brooklyn Daily Eagle newspaper, the wine caves lay 50 feet beneath Williams Street, between arches 27 and 28 of Brooklyn Bridge.

“These cellars were built in 1876, about seven years prior to the official opening of the Brooklyn Bridge,” the newspaper said. “From their inception they housed the choicest wines in New York City…

“When the 18th Ammendment was enacted in 1918, they became in 1933, upon the repeal of Prohibition, the home of Anthony Oechs & Co; a firm engaged in the wines and spirits business since 1846.”

According to the Brooklyn Daily Eagle, and as recalled by one Theodore Belzener, who was familiar with the tunnels, Oechs’ cellars housed extensive wine collections divided into French, Italian and German sections.

Belzener remembers the tunnel walls being adorned with “old-world” style murals of these countries and their vineyards, painted by Werner C. Vonn Clemm, a vice president of the drinks importer.

Overhead, said Belzener, was a “balcony that overlooks the central cellar and the left flank entrance, which is guarded by dusty and faded gonfalons of the Medici.” A statue of the Virgin Mary was housed in an alcove.

It is clear that considerable efforts were made by the company to transform the dank and dingy space into what Belzener describes as a “shrine to Bacchus”.

However, in 1942, less than 10 years after Oechs moved his operation into the tunnels, the cellars underneath Brooklyn Bridge were reclaimed by the City of New York, possibly for reasons related to WW11. The United States of America had joined the War in 1941.

The underground wine cellars, once home to New York’s drinking elite, were briefly used for newspaper storage, before being closed to the public for good.