Our Bordeaux correspondent Colin Hay asks if there is any value to be found in the Bordeaux 2021 vintage, rejecting the increasingly prevalent view that this is a vintage to be avoided and selecting some of his value picks.

As the releases continue to pour from la place de Bordeaux and as my Bordeaux 2021 en primeur coverage comes to its conclusion, it is perhaps time to turn to the sometimes thorny question of value (both relative and absolute).

Much ink has already been spilt on this subject. There is – and was even before the first releases – something of a consensus here. Bordeaux 2021, it is suggested, was never likely to provide value for money; and the (typically) ungenerous releases prices of Bordeaux chateaux have merely confirmed the wisdom of that intuition. The consumer, in such a view, was and remains better advised either to keep her money firmly in her pocket or to stock up on those 2019s which have still to move in price since their initial release. 2021, in other words, should be avoided en primeur since there are better returns on one’s investment to be found.

I understand that view but it is not one I share, not least as it seems to me to be based on at least a couple of false premises about the motives of those who buy en primeur. But, just to be clear, that is certainly not to suggest that Bordeaux 2021 provides fabulous value for money in relative terms; nor is it to suggest that there are plenty of bargains to be found.

Bargains to be found

My point, in a way, is a rather different one. The core assumption in much of the consensus view, neatly reflected in Liv-ex’s fair value methodology, is that the dilemma facing the potential en primeur purchaser is whether to purchase as case of a given wine in the 2021 vintage or whether to purchase another case of the same wine in an earlier vintage.

That, quite simply, is not I think how it works. And if the premise is wrong, we need to run through the implications step-by-step before considering again the advice to the potential en primeur purchaser.

Liv-ex’s methodology may well help up gauge the relative (financial) merits of potential investment strategies; but if it is accepted that en primeur purchases are about more than that it may well not be a useful guide as to what to buy and when to buy it. Especially in a vintage like 2021 it can be quite misleading.

Most consumers aren’t asking themselves ‘should I buy another case of Montrose 2019 rather than a first case of Montrose 2021’. Rather, they are asking, ‘am I tempted to buy Montrose 2021 at all and, if so, should I but it now or later’? Liv-ex’s methodology (and reflections of a similar kind) might help a little in answering the first part of the question; but they provide no guidance whatsoever about the latter.

That is not a criticism; but it is the basis of the suggestion that even if Montrose 2019 looks like a better investment than Montrose 2021 today, it does make it irrational to purchase the latter en primeur.

In the end, there are I think three rather different rationales that might inform an en primeur purchase for a wine like Montrose 2021:

For those exhibiting solely the third type of rationale, Liv-ex’s fair pricing methodology is useful. But even then, only up to a point. It is limited precisely because it fails to consider and to factor into its value algorithm the typical exchange rate risk that an en primeur purchaser is taking relative to someone purchasing a wine closer to the potential point of consumption.

All things being equal, if the currency in which one purchases en primeur is likely to fall between the point of purchase and delivery one is best to buy now; if it is likely to rise, one it better to defer the moment of purchase. That exchange rate risk is considerable – and it is only made greater by factors like the enduring instability in the world economy and, above all for those purchasing in sterling, Brexit.

This is an important point. For, crucially, it applies to all en primeur purchases regardless of the type of rationale informing them. In short, rather more important than the question of whether 2019 represents better value than 2021 today is the question of the exchange rate trajectory over the period of time during which the 2021s will remain in barrel.

That is not something the fine wine press talks about very much. And that is a shame.

Let’s see what (if any) light a brief reflection on exchange rate volatility brings to the subject. To make life a little easier, let’s assume we’re thinking about en primeur purchases in sterling.

Two things become immediately striking if one looks at a sterling-euro exchange rate graph over the last two years. 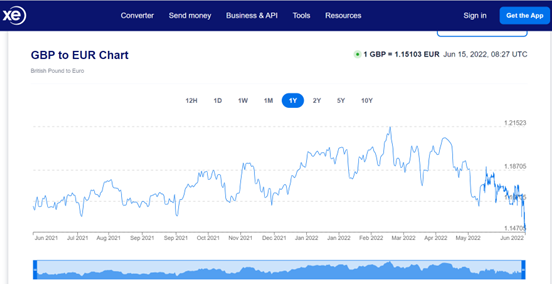 The first is that, whatever the Liv-ex methodology might suggest, today is not a terribly good time to be re-buying 2019s, given that their prices are relatively stable and the purchasing power of sterling has been falling (as has the exchange rate) since the start of the year. One would have been better buying them before en primeur commenced. For those whose logic is a purely financial one, waiting until the 2021s are released before deciding whether or not to re-purchase 2019s is irrational.

The second is that the (ongoing) depreciation in the sterling-euro exchange rate since the campaign started means that those wines released earliest in the campaign represent somewhat better value in sterling-equivalent terms than those being released today (especially as most 2021s have been released at the same euro-equivalent price as the 2020).

More significantly, sterling still looks over-valued. Inflation is rising, interest rates seem likely only to be moving upwards over the foreseeable future and demand in the consumption-driven UK economy is much more sensitive to interest rates rises than it is in the Eurozone. The UK government is in difficulty and that difficulty seems unlikely to be resolved soon. The potential to renege on the Northern Ireland protocol increases the likelihood of a further deterioration in the terms of trade between the UK and the EU and all of this takes place in a context of growing geo-political and geo-economic instability that makes splendid isolation an ever more costly foreign economic policy path. In short, the UK looks exposed and isolated by virtue of its domestic political choices. The situation increasingly resembles a near perfect storm. To the extent that the markets share or come to share that analysis, sterling can only fall further.

That is not good news – and it has very clear implications when it comes to purchasing Bordeaux 2021.

For, if and to the extent that it is true, the diminishing purchasing power of sterling makes 2021 look like a better and better en primeur bet. Or, put more simply, now may well turn out to be the cheapest time to purchase this vintage using sterling – at least for those wines capable of holding their value in euro-equivalent terms.

Without going into detail, at least here, I would suggest the following:

But it is not with these kinds of wines that I want to conclude this article. For there is another, perhaps more traditional, way of looking at value in Bordeaux 2021.

It is to identify, quite simply, those wines which have performed well above their price point in the context of the vintage. I identify these below, by appellation (the left-bank appellations first, their right-bank peers afterwards). None will break the proverbial bank. Each is likely to be released (if it has not already been released) at below €40 per bottle (ex negociant). Indeed, most of them will be available at closer to half that price. Many of them have already been released but none, I suspect, are already unavailable. My advice would be to follow your temptation.

See here for full tasting notes of the wines listed above.