Charles Heidsieck teamed up with with shipper Grain de Sail to celebrate its founder’s 200th anniversary with an Atlantic crossing that barely leaves a carbon footprint. 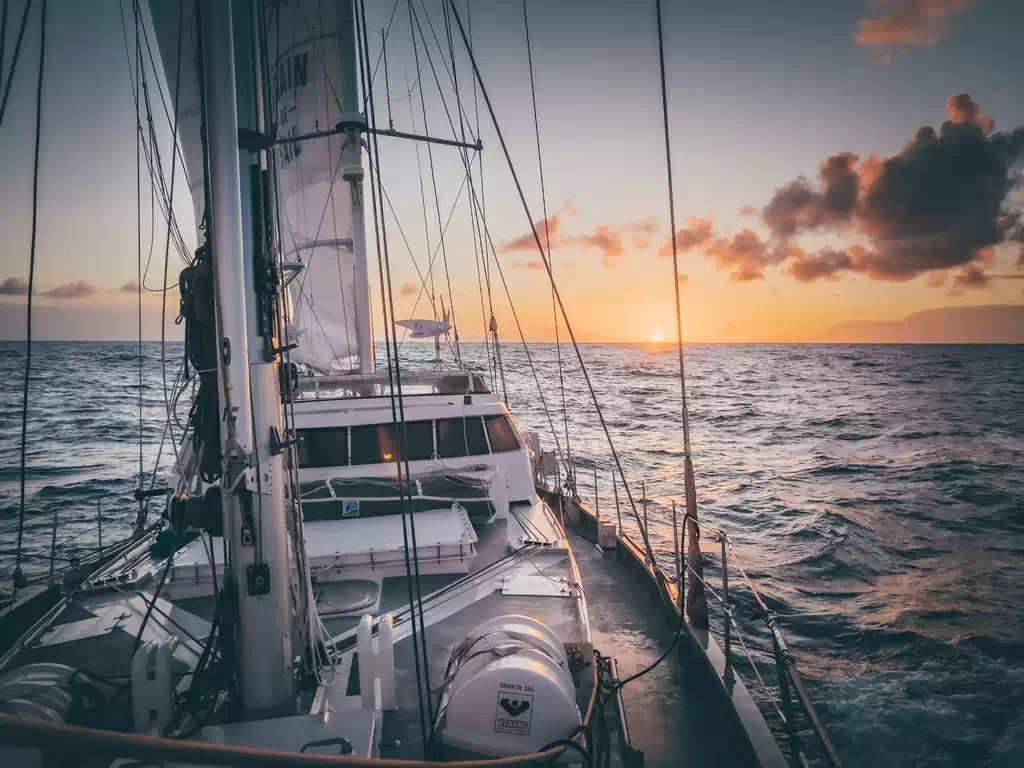 When Champagne house Charles Heidsieck celebrates the 200th anniversary of its founder at a New York City celebration on 16 June by popping the cork on the first cuvée of “Champagne Charlie”, the new sparkler will have added to its aging process a 24-day ocean voyage.

That’s because last Friday night [May 6], the initial 120 cases of the latest cuvée of Champagne Charlie, produced since 1985, arrived in New York harbour after an almost month-long, trans-Atlantic voyage aboard the modern merchant sailboat, Grain de Sail.

It began its adventure in Saint-Malo on the Brittany Coast, and the total crossing of almost 400-miles was made completely under sail.

“The trip was pretty hard with a few storms, but we’ve seen worse,” said Francois Le Naourès, one of the crew of four, and also on-board photographer, on Saturday morning after arrival.

In addition to the Heidsieck cargo, the Grain de Sail also transported another 600 cases from four other French winegrowers.

The connection between the Champagne producer and the fledgling shipper pays homage both to the Frenchman founder born 200 years ago who helped make Champagne popular in America, and to Grain de Sail, the company and vessel of the same name whose ambition is to rekindle an alternate-energy method of getting food and wines across the Atlantic while leaving almost zero carbon footprints on the waves.

It also serves as a reminder of a simpler way of doing things at a time when the international supply chain has been badly broken.

Charles Camille Heidsieck made his first sailing across the Atlantic in 1852 with cases of his new Champagne, and he made additional trips in the years that followed, giving Americans a taste for the luxury fizz.

However, the man dubbed “Champagne Charlie” by the press was later caught in a Civil War crossfire that left him in a military prison.

The Charles Heidsieck company subsequently celebrated its founder with a special “Champagne Charlie” bottling late in the last century, the last vintage being 1985.

That 1985 vintage comprised 55% Chardonnay and 45% Pinot Noir, but details of the latest Champagne Charlie are being kept secret by the producer until bottles are opened next month in New York.

“I can’t say much about the wine at this stage,” Stephen Leroux, Charles Heidsieck’s managing director, said after receiving news of the ship’s arrival from Olivier Barreau, joint owner and chairman of Grain de Sail.

“It will be revealed on June 16th at 21.00. All I can say is that it’s in the heart of Charles’ DNA, witty and free of conventions – and well-spirited.”

The maison says it plans to continue future selective shipping to the US via Grain de Sail, with the sail boat being only US$2 to US$3 more expensive per bottle to transport than conventional shipping.

“The owners of Grain de Sail wanted to make maritime shipping green again,” says its marketing director, Stefan Gallard. “While the technology to do wind-driven propulsion is there – and it’s renewable and cost-effective – these ships did not exist, so the owners had to build one.”

The vessel is 24-metres (about 80 feet) long and can carry 50 metric tons, Gallard says, or about the equivalent of two shipping containers.

“The hull is well-insulated, and there is a small air conditioner on board to keep the wines cool,” he says, noting that there are also on board alternate energy generators – wind, hydrogen and solar.

“We didn’t want to create a new product to ship, and it’s too expensive to do it with commodities,” Gallard says of the company’s origins. “But we want to help make consumption greener.”

So Grain de Sail began as the owner/shipper of chocolate and coffee from its operations in the Dominican Republic, and only began shipping French wine to America after its first voyage in November 2020.

The vessel completes two round trips a year, and this is its fourth in total. In two weeks time, Grain de Sail leaves for the Dominican Republic before returning to France with its cargo of chocolate and coffee.

Operations have been successful enough that the company now is building a larger, second vessel, twice as long with five times the shipping capacity.

Even though it was carrying a treasure trove of wine, Le Naourès notes that the Grain de Sail is a “dry ship” – no alcohol consumption on the crossing. Not surprisingly, the crew spent arrival evening, Le Naourès says, at “The Estuary – the bar across the street from the harbour.”