Krug has launched its Éditions for 2022, comprising a white and a rosé, both of which were built around the “erratic” 2014 harvest in Champagne.

The cuvées were unveiled at a press event in London yesterday, where db was able to sample the latest set of Krug’s multi-vintage blends, which are made annually with a different set of wines, but with the same intention: to craft the best expression of Champagne possible.

For 2022, the house is releasing the 170th Édition of its Grande Cuvée next month, followed by the 26th Édition of Krug Rosé in August.

Although the blends differ for the blanc and rosé Champagnes, they are both “composed” around the 2014 vintage, which Krug described as “an erratic year that oscillated between hot dry spells, and cool rainy periods.”

Speaking yesterday about the harvest – which makes up 55% of the Grand Cuvée and 67% of the rosé – Olivier Krug, who is a member of the sixth generation of the Krug family and director of the house, said he remembered the 2014 vintage well.

Recalling that “everything started good,” he added that “all the critical stages of vineyard development occurred under the right conditions,” before explaining that “we had a marvellous flowering and we were full of hope.”

Continuing he said, “I remember walking through [Krug’s] Clos d’Ambonnay in early September and all the grapes were black and the juices were full of aromatics – we were almost ready to pick – but then, two days later, I walked through the plot, and smelt vinegar everywhere.”

The reason for this was down to what Olivier called “a lightening attack” of Drosophilia suzukii, which is a fruit fly from Japan that reached Europe in around 2008, and caused particular damage to the crops in Champagne as well as Burgundy in 2014.

Not all was lost in this harvest, however, with Olivier commenting that this “generous” vintage allowed Krug to select “healthy and balanced grapes” after sorting, with the year notable for its “superb Chardonnay, which was elegant with lots of citrus” and Meunier with “a lot of fruitiness, but in lesser quantities”. Meanwhile the Pinot Noir was “more heterogeneous”.

But Oliver also used the story of this particular vintage to illustrate the strength of Krug, which, with its annual blends, incorporates hundreds of wines from multiple vintages, allowing the house to craft a complex and balanced Champagne to a consistent quality and similar style by drawing on a wide range of vineyards, and a broad set of harvests.

So, for the 170 Édition of Krug Grand Cuvée, he said that the 2014 wines had left the house with “a lack of structure” for the blend, which it was able to make up for by “leaning largely” on 2013, which Olivier said was “a cold and late harvest that produced wines with great structure, intensity and freshness.”

He added that the “particularity” of the 170th Édition – numbered to mark the 170th time such a blend has been made, starting with the 1844 harvest – “is the low share of voice of Meunier at 11% [with 51% Pinot Noir, 38% Chardonnay making up the rest of the blend], and the high proportion of reserve wines, which is more than 45%.” 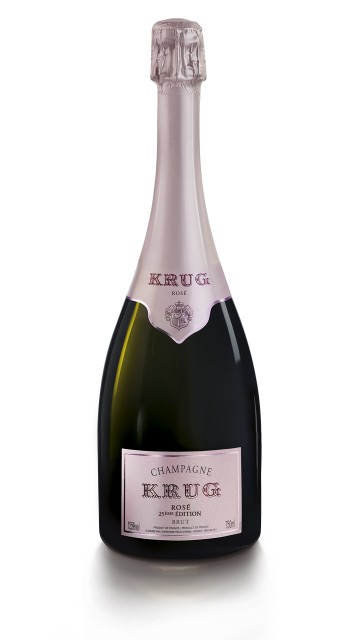 As for the Krug Rosé 26th Édition, that incorporates a selection of 28 wines from seven different years, the youngest from 2014, and the oldest from 2005, with 67% of the blend being from the 2014 harvest.

In terms of grape varieties, it is made up of 44% Pinot Noir, 30% Chardonnay and 26% Meunier, with its colour coming from 11% red wine made from Pinot Noir from plots in Aÿ and Taissy, which, cellar master Julie Cavil said was from the 2013 vintage, after the potential for making a red from the 2014 harvest was compromised by the aforementioned Drosophilia suzukii, known commonly as the Asian fruit fly.

The resulting pink Champagne has been described by Krug as having aromas of rose hips, cured ham, mulberries, redcurrant, peony pepper and pink grapefruit,” and “delights the palate with delicate flavours of honey, citrus and dried fruit with a long finish, enhanced by its fine bubbles.”

The dosages of the latest releases are between 5 and 6g/l, and both Champagnes have spent seven year’s ageing in Krug’s cellars.