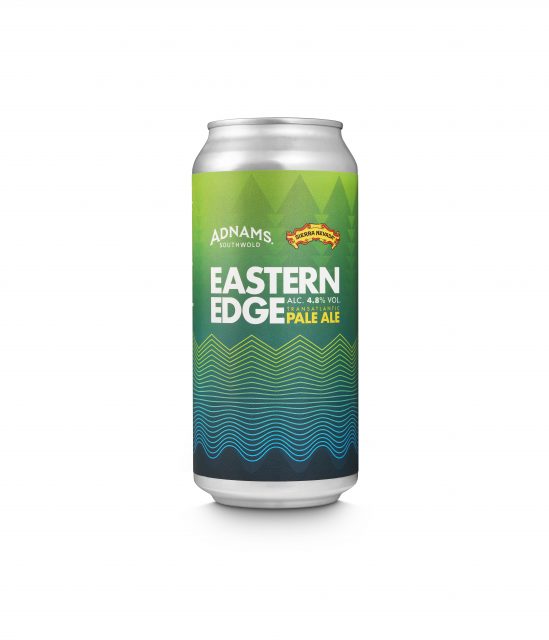 The launch marks Adnams’ 150th anniversary and is said to celebrate the role of the global beer community after being named to reflect the views across the the sea and mountains that dominate each brewery’s hometown.

The collaboration has, according to sources, been inspired by two key beers, Sierra Nevada Pale Ale and Adnams’ cask Southwold Bitter.

Speaking to db, Fergus Fitzgerald, Adnams production director said: “For our anniversary collab we wanted to work with a brewery that shares many of the same values that I think have helped Adnams navigate the past century and a half, particularly the importance of independence and long-term sustainability. Sierra were always at the top of that list. I was fortunate to be introduced to Scott Jennings from Sierra over a brewers zoom get-together in the first lockdown. Scott jumped on board with the idea straight away, working with Dan, our head brewer, to bring together elements of Sierra’s Pale ale and Adnams’ Southwold Bitter. Other beers and styles may have overtaken them, but I think they remain the beers that forged the reputations of their respective breweries and given the nature of the celebration were the right beers to bring together.”

Sierra Nevada’s yeast has made the journey to Suffolk to be used to brew Eastern Edge along with Adnams’ house yeast. Plus, UK and US varieties of Cascade and Chinook hops were selected for their delicate floral and resinous aromas and tropical flavours of grapefruit, lychee, and pineapple, whilst the Rye, Pale Ale and Cara malts provide a spicy biscuit balance.

Dan Gooderham, Adnams head brewer, explained: “Adnams house yeast, which has been used since the 1920s, and Sierra Nevada’s ‘Chico’ yeast, have given the breweries their distinct flavours for many years, so we thought that it would be interesting to have the yeasts work in tandem, for a true collaboration. American hops are such an essential component for Sierra Nevada’s Pale Ale, so we decided to source some UK grown hops of the same variety to add even more depth of flavour to Eastern Edge. The provenance of hops has a huge influence on their characteristics and the flavour and aroma expressed, much like wine and the ‘terroir’. All this combined is what gives Eastern Edge its unique taste.”

Fitzgerald added: “I think we see lots of similarities between our two breweries. Sierra, like us, values independence. It is not easy to achieve and even harder to maintain for as long as we have. Like us, it’s very aware of its sense of place. Sierra has a connection to its environment and the desire to balance its protection with progress. Sustainability has been a key focus for the Sierra team – that similar outlook is always something we look for when partnering up, and we’re delighted we could make this happen to celebrate our 150th year.”

Steve Grossman, brewery ambassador at Sierra Nevada Brewing Co reiterated how “finding like-minded brewers, sharing stories and collaborating on a new beer recipe over a pint or two [is] truly one of the most unique and amazing things about the craft beer industry”. He added how “being invited by Adnams to collaborate on a brew to help commemorate its 150th anniversary was sincerely a great honour” and said that “hopefully the good folks of Adnams will celebrate with Sierra Nevada when our brewery marks its 150th anniversary”.

The 4.8% ABV beer, Eastern Edge, will be available to buy in 440ml cans from 25 April from adnams.co.uk and in Adnams stores. It will also be available in cask and keg in Adnams pubs across the UK.