Thatchers Cider has unveiled its new cider dispense system that can pour three different fruit ciders from the same font. 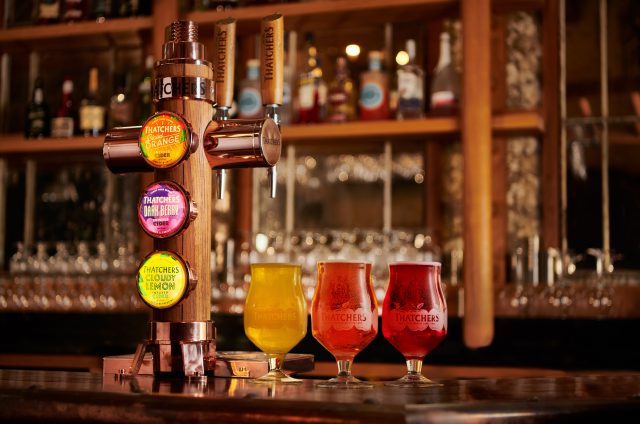 The tap, which is being heralded as a first for the cider industry, named Thatchers Fusion Font, will give consumers the choice of three infused premium fruit flavoured ciders to the bar in one single font from one keg and through one line.

According to the cider-maker, the 3-in-1 Fusion Font uses less cellar and bar space than three separate lines, meaning lower maintenance, less space and more choice.

Martin Thatcher, fourth generation at the independent Somerset cider maker said: “This is world leading innovation – a first for Thatchers and a first for the industry. We’re introducing a unique dispense system that will add to consumer’ experience at the bar.”

At the point of pour, the Thatchers Fusion Font infuses a micro measure of the selected fruit flavour into a pint of Thatchers premium apple cider, creating one of three freshly mixed ciders. According to Thatchers, drinkers get the same expertly crafted apple cider, with a freshly-mixed infusion hitting the glass as one.

Thatchers Cloudy Lemon is one of the three ciders to feature on the Fusion Font, making its appearance in the on-trade for the first time and will be accompanied by Thatchers Dark Berry, and a new flavour, Thatchers Blood Orange joining the line-up.

Rob Sandall, Thatchers on-trade director added: “With half of all fruit cider in the on-trade sold on draught, this pioneering technology with Fusion Font opens up brand new theatre to the bar, allowing operators to tap into fresh opportunities and offer drinkers exciting experiences, such as cider cocktails. Meeting consumer expectations at the bar in an engaging way is so important. Three flavours in one font, from one keg and through one cooled line, brings with it a significant reduction in the need for glass bottles, resulting in less packaging waste, meaning when your customers choose a cider from Thatchers Fusion Font, they are making a sustainable choice. We believe this ground-breaking development will transform how cider is enjoyed, revolutionising the category.”