The auction house kicks off its 2022 global wine and spirits auction calendar in Hong Kong with a whisky sale on 21 January. The sale comprises 470 lots of rare Scotch whiskies, including a Highland Park 50-Year-Old Single Malt. 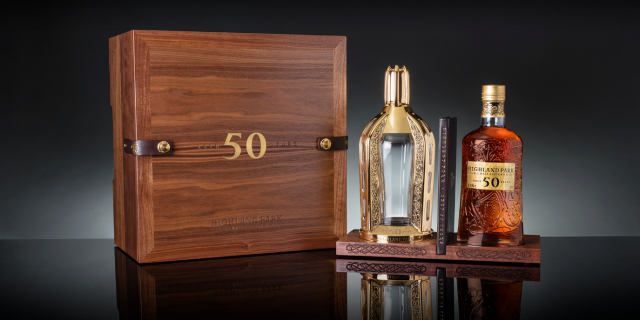 The bottle of Highland Park 50-Year-Old Single Malt Scotch Whisky, released in 2020, has been donated by Edrington Hong Kong in support of the environmental cause Green Power, a Hong-Kong-based NGO dedicated to addressing diverse environmental issues.

It is only the third 50-year-old whisky to be created in the 223-year history of the Orkney-based distillery.  It was produced using a traditional solera system with the contents carefully selected from nine refill casks, originally laid down in 1968, and married together in 2008, before being re-racked into a handful of first-fill sherry seasoned oak casks.

After a further 12 years of maturation, one of these limited casks was blended with a small quantity of the whisky from the last 50 Year Old released by the distillery. Only 274 bottles were produced and the special lot is numbered “1”, carrying an estimate of HK$210,000-HK$250,000.

Signed by Highland Park master whisky maker, Gordon Motion, the prized bottle is presented in a hand-made wooden box, crafted from walnut by Scottish Master Craftsman, John Galvin. The whisky is encased in an embossed glass bottle featuring a design inspired by the Norse heritage of Orkney.

Bonhams director of wine and spirits Asia Daniel Lam commented: “Our newly-added January sale is a response to a robust and growing market. Demand for whiskies, not only Japanese but also Scotch, remains strong and wide, and our January sale offers a wide selection of collectors’ favourites – all with attractive estimates.”

The sale will be staged on 21 Jan at 3pm (HKT) at the auction house’s centre in Admiralty .