The head chef of Native at Browns in Mayfair on taking a zero-waste approach to food, championing closed-loop cocktails, and receiving a cease and desist from McDonald’s after creating a popular twist on its famous fish burger. 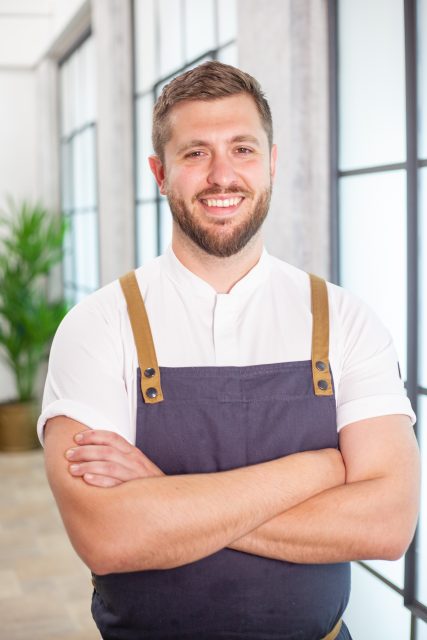 Most of my food memories are with my mum when I was young. She hates cooking but we seemed to do a fair bit of it together. We once cooked pan-fried vegetables and served them with pasta and cheese on top. I was convinced that I’d come up with the idea of this complex dish all by myself.

Did you dream of becoming a chef or did you fall into it?

I fell into it from a great height. Food wasn’t a major focus growing up, save for the odd trip to Pizza Express on special occasions. I studied business at university with the intention of getting a job in the City. Saying that, I’d often come home from school and make peanut butter on toast and pretend I was on Ready, Steady, Cook, talking the audience through how to make it, so I guess it was always in there somewhere.

What inspired you to make Native a zero-waste champion?

It’s always been at the core of everything Native does and what we believe in as people, striving to make conscious decisions. When you are part of the process of growing, foraging or rearing it breaks your heart to see any of your hard work go to waste, and the same rings true for for running a business. What has helped is that all aspects of our mission to become a zero-waste restaurant are accessible to people at home and everything can be replicated.

What has been the trickiest aspect of operating in this way?

It’s been very hard to get the ear of some of the larger suppliers that deliver our produce because we don’t have buying power of bigger restaurants. Asking them to deliver smaller amounts or getting them to reduce the amount of packaging that gets passed onto us is a major problem, but slowly suppliers are starting to maker changes, especially after lockdown.

Can you give me some examples of the way you re-use food that would usually be discarded?

The main way we highlight this is with our zero-waste snacks, which we give to guests at the start of their meal. They are a series of little mouthfuls that include things like fish toast with apple hoisin – a play on sesame prawn toast, which we make using the trim and off cuts from portioning fish. Our deerstalker pie is a small pie filled with braised venison trim. We also serve crispy fish skin bites, waste coffee-cured tout and pakoras made from vegetable scraps and peel.

Do you serve zero-waste drinks?

We do indeed. There’s the Compost Cordial, made from leftover bar waste fruit, and this summer we had a Cucumber Gin and Tonic made with the juice from off cuts of cucumber from one of our dishes. A mainstay on the menu is the Waste Coffee Espresso Martini. In order to justify serving coffee, we make sure we can get as many uses out of it is as possible through the restaurant. Over Christmas we served mulled wine made with waste wine syrup.

Would you like to see other restaurants adopt your zero-waste philosophy?

There are a surprising amount of restaurants that operate this way already. It makes sense for small businesses to reduce food waste, but for me it’s also about thinking out side the box and trying to get a second use out of as much produce as you can. We use veg scraps and onion skins as an attractive layer to serve food on top of. Vines from wine producers are cooked on, and we’ve made taco holders out of old menus and candles from tallow.

What’s the dish that you’ve created that you’re most proud of?

This has to be a toss up between our marrowmel dish and our fish fillet. The marrowmel was one of the original zero-waste concepts we came up with. We were only able to order huge amounts of bone marrow from our supplier at the time, so always had an excess. I decided to used it as a substitute for butter in as many recipes as possible, including a white chocolate ganache, which we serve set back into the bone.

The Native fish fillet is a sustainable take on the famous fast food burger, made with fish cheeks set into a terrine, breadcrumbs from leftover focaccia and brown crab rarebit served with a tartar made from pickled seaweed. We sold 4,000 in five months and got a cease and desist letter from McDonald’s.

This is quite a low-key pairing that was discovered during lockdown and was something of a light bulb moment: Shin Ramyun instant noodle soup paired with orange wine Podere Pradarolo Vej Bianco Antico Malvasia 2019 from Emilia-Romagna. Make sure you go full spice on the ramen.

What is the most memorable meal you‘ve ever had in your life?

Hand-picked mussels foraged from Oldshoremore beach in Scotland, picked and eaten within the hour. I cooked them with onions and white wine, and drank the rest of the bottle. The pleasure was greater then the sum of the meal’s parts. With every bite came the excitement of eating a mussel that I’d found myself. I used to go back to the same spot to pick mussels, but they’re no longer there, which makes the memory all the more special as it can never be recreated.

That’s a tough question, as what we may see as weird might be staple diet in some cultures. Most of the weirdest things I’ve eaten were in my primary school dinners! I once had a leftover rice and tomato ketchup salad, but we hadn’t been served rice the previous day, so I don’t know where that came from.

Anthony Bourdain – he influenced more people then he will have ever known. I don’t think I’ll ever miss someone I never knew as much as Anthony Bourdian. Another hero of mine is Brazilian chef Alex Atala (right). I was lucky enough to cook for him at Native. All the chefs were super nervous, myself included. He came into the kitchen to say hello and had this magical aura about him. He greeted us all like old friends and everyone was immediately relaxed and calm. I’ve never seen somebody do that to a room full of people before. I mustn’t forget Ainsley Harriott, my Ready, Steady, Cook muse!

Autumn for its root vegetables, game, squash and most importantly, wild mushrooms.

It has to be yeast. We make bread every morning as it’s the foundation of our menu.

Hash browns with smoked cod’s roe or sour cream and trout roe – I just love them.