Sotheby’s inaugural wine sale in France was a rare ‘white glove sale’, selling all lots and smashing its pre-sales estimate to achieve €1.3 million – including a world record for any methuselah of Domaine de la Romanée-Conti. 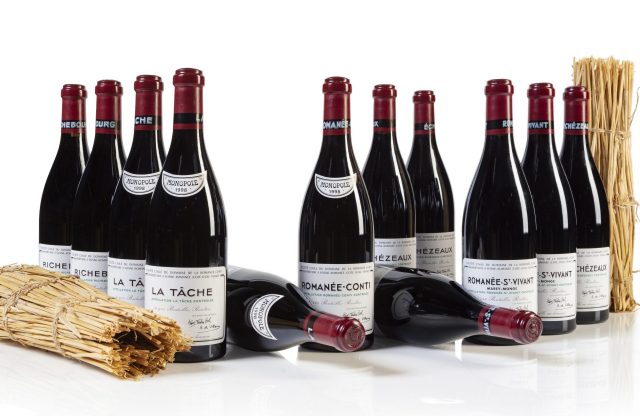 The sale of an outstanding private collection of wines from one of Burgundy’s most prestigious domaines, which was estimated to acheive a total of €685,000 and €906,000, was 100% sold.

The collection comprised 25 lots, spanning vintages from 1998 to 2011 – all of which were acquired directly from the domaine on release. It included rare and coveted cases in a variety of bottle formats, including a large offering of extremely rare Methuselahs. The sale’s highlight – the Methuselah of Romanée-Conti 2000 – sold for €350,000 ( $404,600), nearly double its high pre-sale estimate (est. €140,000-180,000), establishing a new world auction record for any Methuselah of Domaine de la Romanée-Conti.

All 25 lots achieved prices above their high estimates.

Amayès Aouli, Head of Auction Sales for Continental Europe, Sotheby’s Wine, said the exceptionally strong results of the inaugural wine sale in France was a remarkable way to start Sotheby’s regular series of sales in France.

“It also demonstrates that our fourth major international hub will provide our clients with an ease of access to the global market, and an opportunity for buyers to acquire the rarest bottles with excellent provenance,” he said.

“This sale saw the highest level of demand from all around the world with European, Asian and American buyers being strongly represented. This collection ranks alongside the many prestigious wine collections from private European collectors that we have brought to the market over the years.”

The auction house announced it was opening a new auction hub in France  back in September.