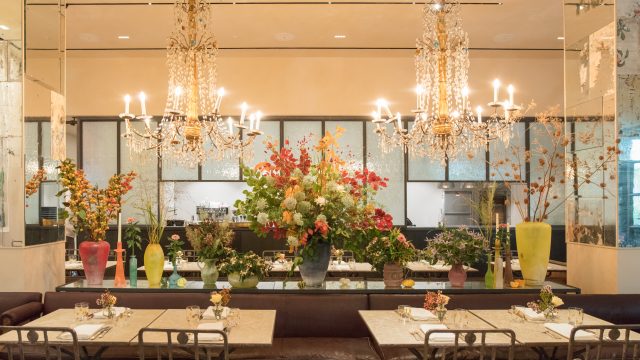 The concept: Run by Italian-Australian power couple Francesco and Gael Boglione, Petersham Nurseries in Richmond started life in 2004 as the world’s most glamorous garden centre serving loose leaf teas and homemade cakes, where you could pick up an armoire with your pot pants.

Francesco made his name as a furniture and antiques dealer and wanted to create a space where both the blooms and Lloyd Looms were for sale. Now overseen by daughter Lara, in 2018 Petersham Nurseries opened a central London offshoot in Covent Garden, complete with its own deli, wine shop and café. 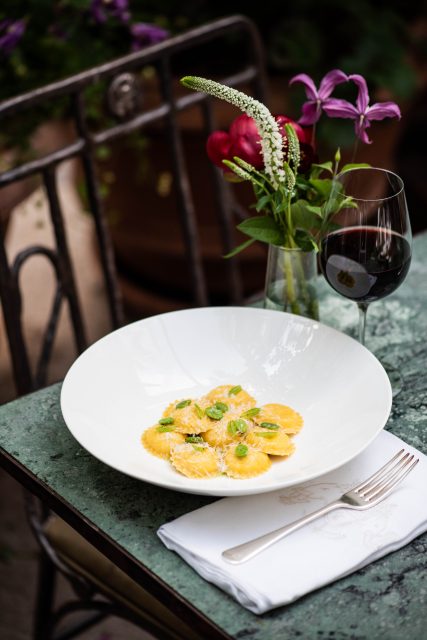 The décor: Like the Richmond original, its Covent Garden sibling brings the outdoors in via an explosion of flowers. Festooned with foliage, the space shimmers with glinting glass from its fleet of Murano chandeliers, while hand-blown vases in pastel hues frame the space, making it feel more private and intimate.

An abundance of mirrors, marble-topped tables and glass give the room a light and airy feel. The designer has cleverly created a grand and elegant space that feels homely and welcoming rather than cool and austere. The central courtyard, just inches from Covent Garden’s buzzy Neal Street, is calming and transportive.

The food: Taking a local, seasonal approach, the majority of the organic meat, veg and eggs used in the dishes are sourced from the Boglione’s Haye Farm in Dorset. Specialising in plot to plate dining, while the dishes have a distinctly Italian accent, most of the produce used to create them hails from the UK.

The best way to enjoy the Petersham in its full glory is via the seasonal tasting menu, which offers a wonderful snapshot of the ingredients the chef has to play with at that moment in time. During our visit in early September we were treated to a medley of dishes that celebrated the best of the late summer fare.

Signature dishes: The tasting menu is cleverly judged, as the dishes seamlessly evolve from small, light nibbles into bolder, bigger flavours, though nothing feels heavy, and you leave feeling pleasantly satiated rather than groaningly full.

One of the most delicious morsels of the evening was a smoked mackerel and lemon croquette, which exploded with savoury and citrus flavour, leaving me wanting a bucket full of the divine bites.

The creamy lemon and pea risotto was equally delightful, the subtle sour tang of the citrus perfectly balancing out the verdant sweetness of the summer peas in an inspired combination I’m keen to recreate at home. 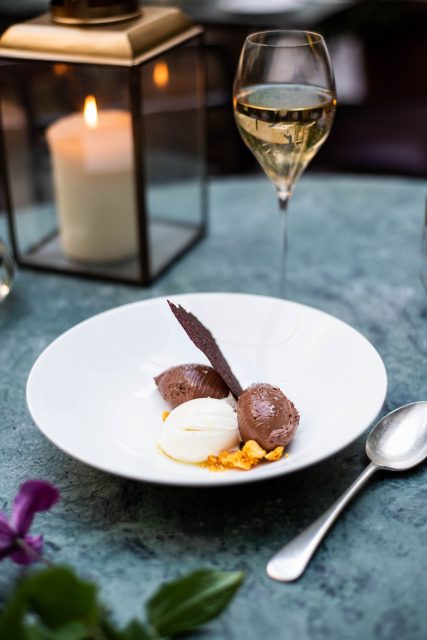 No Italian tasting menu would be complete without a pasta dish, and the Petersham’s trio of frilly cacio e pepe bottoni with broad beans and mint didn’t disappoint. Like the risotto, the freshness of the mint complemented the buttery pasta parcels in an explosion of vibrant summer flavours. An iridescent sliver of red mullet, meanwhile, sang of the sea with its salty caper and samphire sauce.

The wine: The aforementioned Lara is married to Giovanni Mazzei of the Mazzei Tuscan wine dynasty, which counts Castello di Fonterutoli among its jewels. The entrepreneurial pair recently launched Petersham Cellar, a wine import company specialising in hard-to-find Italian drops.

The all-Italian wine list features some heavy hitters and the wine flight offers you a liquid tour of the country, taking in everywhere from Umbria and Tuscany in the centre of Italy to Sicily down south.

Levente, our Romanian-Hungarian sommelier, proved a trusty tour guide, imparting pearls of wisdom with each pour. Among the wine highlights of the night were Antinori’s watermelon-laced Sof rosé from Tuscany and peachy Bramito Chardonnay from Umbria.

The surprise of the evening was an orange wine from Sicily crafted from Catarratto by Nino Barraco. Sour and flinty with notes of honeysuckle and white flowers, it was surprisingly slurpable and paired a treat with the cacio e pepe.

What could be done better: The only slightly off wine pairing of the evening was the glass of Lustau Pedro Ximénez we were served with our decadent chocolate mousse dessert with olive oil ice cream and honeycomb, which proved a cloyingly sweet partner for the intensely rich pud.

Last word: The Petersham Covent Garden has much to recommend it, offering the diner both a beautiful setting and exemplary Italian food cooked to a high standard. There’s nothing showy about the dishes, but each is exquisitely presented. Attention to detail is paramount and it pays off. For flavoursome, seasonal dishes and exciting Italian wines it’s hard to beat.