It’s first light on a Thursday in September and the trusty Mitsubishi Outlander rolls off the drive. Surrey and Kent are swathed in mist as I head for Folkestone. 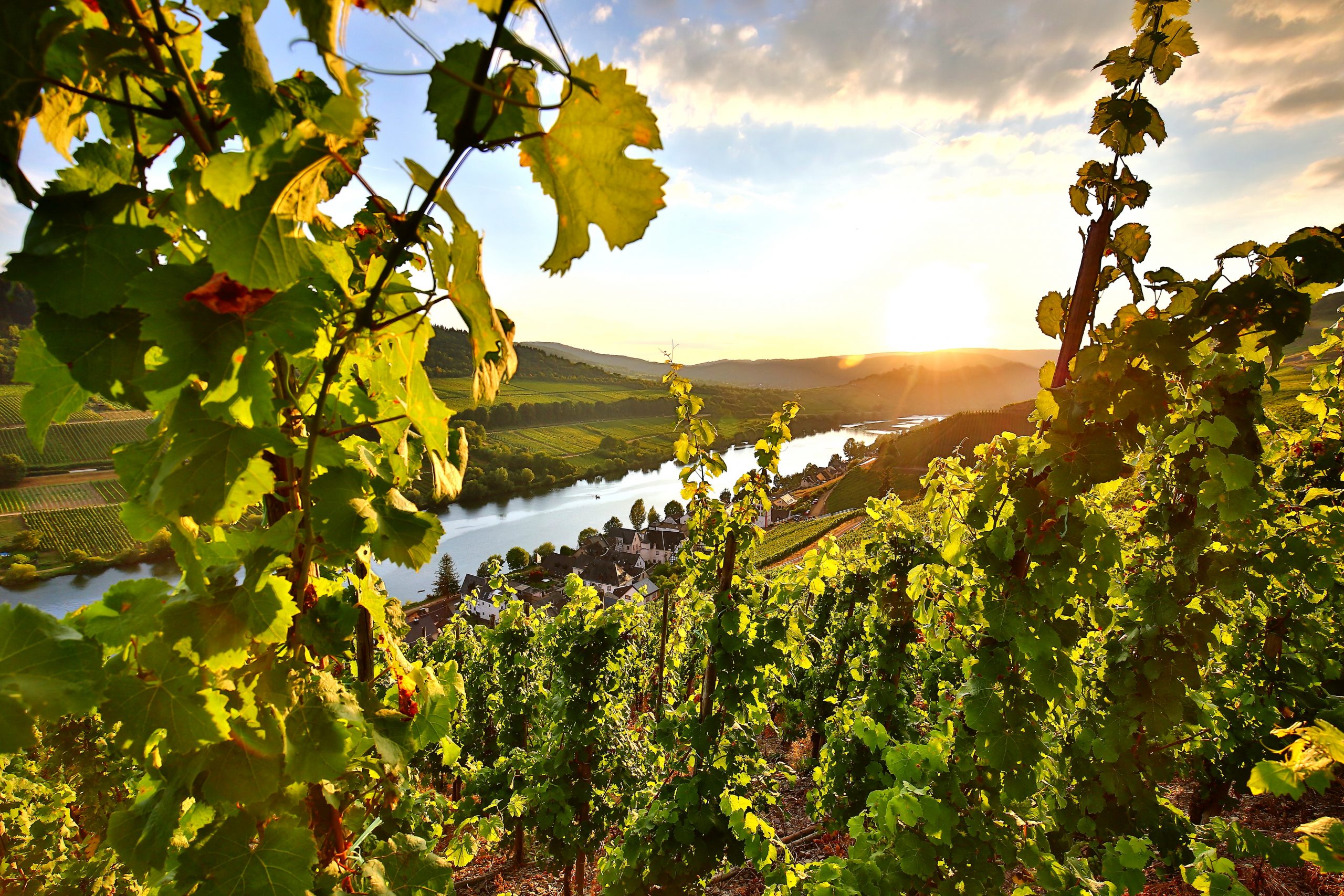 There is just time for a swift bacon bap before plunging into the tunnel and out onto the autoroute. The crowded E40 across Belgium is always a tiresome stop start affair but once beyond Spa the traffic falls away. A pit stop for coffee, cake and diesel in St. Vith on the German border is followed a gasket blowing thrash down the autobahn to Trier. What awaits in the Electoral Palace is a late afternoon tasting of glorious Mosel Rieslings. The day ends with a hearty dinner at the Zeltinger Hof, as a nightfall worthy of Richard Strauss creeps across the blue slate terraces.

Until the horrors of Covid-19 disrupted our lives, my annual fix of everything to do with German wine would start as described above. For a decade or more the centrepiece was the weekend for MWs and students organised jointly by Geisenheim University, the German Wine Institute and the Verband Deutscher Prädikatsweingüter (VDP, the association of Germany’s top wine estates). Friday’s programme of lectures on wine science were followed by vineyard visits on the Saturday. The culmination of the weekend was the VDP’s enormous Sunday tasting of Grosses Gewächs (GG) wines, usually located in the incredible medieval dormitory at Kloster Eberbach.

Through this regular exposure to Grosses Gewächs wines I have been able to observe the evolving story of Germany’s top dry white wines. There has certainly been no shortage of “Sturm und Drang”. It is hard to say when the low point for Germany’s fine wine reputation was reached but 1982 might be a candidate. This vast harvest (older growers joked that the local swimming pool had to be filled with the excess wine) could be seen as the culmination of everything that was wrong with the 1971 German Wine Law. Müller-Thurgau had overtaken Riesling as the most widely planted variety and much of the industry seemed to be content with pumping out anodyne liquids dosed up with Süssreserve. In the UK, a few gallant souls such as the late John Boys, MW continued to champion classic German wines, but all that most consumers saw was Liebfraumilch, Piesporter Michelsberg and Niersteiner Gutes Domtal.

Sorting out this mess was always going to be the work of decades rather than years. Early on it was realised that a central part of the strategy had to be the revival of dry white wine production in places like the Rheingau and the Mosel (southern regions such as Baden had never given up making dry wines). This was not a movement to reject the great tradition of late harvest medium and sweet wines, but rather an attempt to put dry wines on the shelf next to them. I am pretty sure that there was an element of realpolitik at play as well; in the modern world there is a limited market for premium medium and sweet wines, no matter how good they are.

It has to be said that the first generation of these new wave dry German wines met an arid reception in the UK. Both sides were probably partly to blame. Some of the wines were thin and ferociously acid, with a rawness that brought tears to the eyes. On the other hand, if you had been raised on refined and graceful Spätlesen, these edgy and strident dry wines would have come as a bit of a shock to your world view. Brahms meets Schoenberg, if you see what I mean.

Fortunately, the producers kept going, not least because there was a demand for these dry wines on the home market. The winemaking improved markedly. The type of ripeness required for great dry white wines is subtly different from that needed for great medium white wines. For example, the balance between acidity and alcohol in a dry wine is different from that between acidity, residual sugar and alcohol in a medium wine. Similarly in the vineyard, most growers targeting premium dry white production aim for a high degree of ripeness without any intervention of botrytis, whereas a touch of noble rot often characterises the lusher medium wines.

The VDP embraced the dry white wine movement when it created the Grosses Gewächs designation nearly twenty years ago. Now is not the time to rehearse every stage of the tortuous legal and political development of the category since then (the first nine chapters of the First Book of Chronicles are more exciting). Life really is too short and self harming does not help. What really matters is that today Grosses Gewächs are high quality dry wines (mainly whites but with a few reds), from great single vineyard sites (think grand cru), made from classic grape varieties (Riesling, Spätburgunder and a few others) and produced by a collection of Germany’s pre-eminent estates.

Let me put my cards on the table; I have grown to love these wines. Perhaps the best measure of this is that I buy a few cases every year and we drink them at home on special occasions. In my experience the best examples capture the concentrated crystalline essence of Riesling. When young they have a multi-layered fruit expression: not just the citrus and green apple character of traditional medium German wines but a riper side with notes of greengage, melon and apricot. The palates are intense and vibrant, with just the right balance between acidity, alcohol (and fruit) mentioned earlier. They are beautiful with fish.

Whenever I have spoken with restaurateurs and sommeliers in Germany, I have got the impression that the vast majority of Grosses Gewächs wines are bought and drunk during this youthful phase. This has created the idea in some quarters that they do not age as well as a traditional Spätlesen. This may or may not turn out to be the case. What I can say is that some Mosel Grosses Gewächs that I have from 2009 and 2011 are still drinking well now. The aged bouquet is a little different from an old style Mosel Riesling: less petrol and pine resin, more honey and wax.

The late summer Grosses Gewächs tastings put on by the VDP, both in Germany and now abroad, tend to focus on the white wines from the previous vintage and the red wines from the year before that. Hence the last pre-lockdown London tasting, in 2019, majored on the 2018 whites and the 2017 reds. Courtesy of coronavirus there was no session last year so we are now a year behind, with the 2019 whites and 2018 reds under the spotlight. This is no bad thing: rather than tasting the wines just after bottling, they have had an extra twelve months to settle down.

The VDP organised a remote tasting with flights of samples sent out via Avino, followed by a Zoom call with a quintet of producers. All very efficient and a boon for those of us still keeping a low profile. I chose two flights of Riesling, featuring a selection of VDP estates from the Mosel in the north to Württemberg in the south.

Looking back through my vintage notes I wrote that the 2019 winter was dry, a factor that ultimately checked the size of the crop. Spring was late in coming and there was a little frost in the Mosel. Flowering passed without incident. The vines rapidly caught up any lost time. July and August were dry with some very high temperatures. The first three weeks of September were also fine and picking was underway by the time I arrived in Hattenheim on Sunday 22nd September. The contrast with the Monday morning could not have been starker: the start of the working week (and the autumn equinox) brought torrential rain. When I went for my run along the Rhine towards Oestrich it was like the final scene from Wagner’s “Götterdämmerung”, with me lurching, Hagen-style, towards the turbulent river. Cooler showery weather persisted for several days before a window of clear weather allowed the picking to resume. Most of the grapes had been gathered by 7th October.

The producers are happy with the vintage. Caroline Diel of Schlossgut Diel describes the wines as “extremely charming”, with beautiful fruit and a good balance. Sophie Christmann of A. Christmann noted that the grapes in 2019 had retained more acidity than in 2018, allowing her estate to hold on for more complete ripeness. “An intelligent vintage” with “great future potential” was how Johannes Hasselbach of Weingut Gunderloch characterised the year.

Across the flights I tasted, there was inevitably some variability of quality but overall I would have to agree with the upbeat assessment of Caroline, Sophie and Johannes. The standout wines for me were Dr. Loosen’s Wehlener Sonnenuhr and Dönnhoff’s Hermannshöhle: both exhibited the sublimely complex Riesling fruit I described earlier. The following also deserve a mention in despatches: Heymann-Löwenstein’s Röttgen, Nik Weis-St. Urbans-Hof’s Laurentiuslay, Robert Weil’s Gräfenberg, Schlossgut Diel’s Goldloch, Wagner-Stempel’s Heerkretz, A. Christmann’s Meerspinne and Ökonomierat Rebholz’s Kastanienbusch.

Amongst the Grosses Gewächs producers there does seem to be the same sort of diversity of approach to primary fruit versus lees ageing/struck match character that we often observe in the db Global Masters tastings. At a personal level I must admit that I have mellowed a bit and do not automatically start foaming at the mouth when I smell “positive reduction” on a wine. Also, despite the official line I mentioned earlier about producers avoiding botrytised fruit when making Grosses Gewächs wines, I did pick up some spicy marmalade aromas on a couple of samples. As with the lees character, as long as the wine is balanced and harmonious I see no moral hazard in this. In fact, it all adds to the variety and fascination of these spectacular wines.