With the dust starting to settle after a fascinating, complex and increasingly contentious en primeur campaign that has seen the return to ‘Bordeaux bashing’ across the fine wine Twittersphere, it’s time to take stock of the last eight weeks, says Colin Hay. 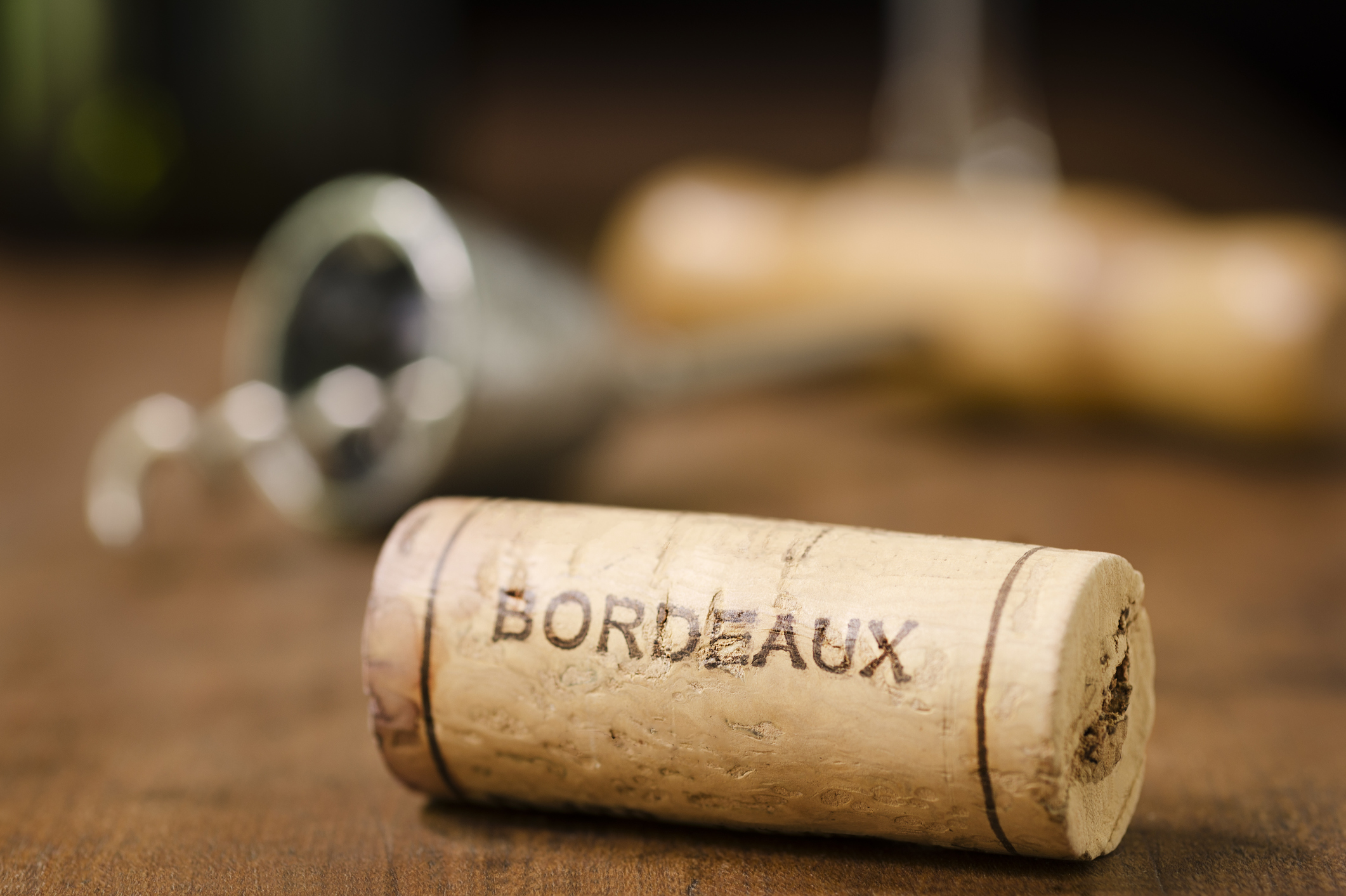 It is not difficult to see what has offended Bordeaux’s re-vocalised critics. Expectations before the campaign started were for price rises in euros of around 10-15% (a little less in sterling-equivalent terms, due to the modest appreciation in the exchange rate over the preceding 12 months).

At price parity with the 2019s (in sterling-equivalent terms), the early releases were very well received. They served to breathe life into the nascent campaign. All the signs were promising. However, slowly but surely, prices started to rise. By the sixth week of the campaign, average price rises were at 12%. But the rate of increase was already accelerating, with prices soaring by 16% on average in the penultimate week of the campaign and a startling 29.5% in the final seven days; an exponential rise in prices as the campaign unfolded.

The following figure (calculated from both my own and Liv-ex.com data) captures it well. It shows, quite simply, the average increase in release price in sterling (for a case of 12 bottles in bond) relative to the 2019 for each week of the campaign. 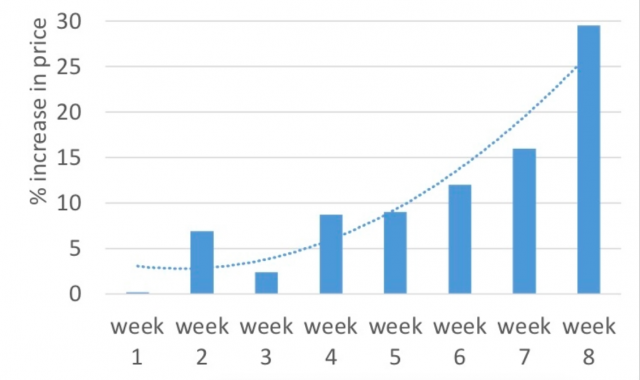 So what are we to make of this? And, perhaps more importantly, what have others been making of it?

There is nothing at all unusual – certainly in a campaign in which prices are rising – about price dispersion (with those more highly placed in the official classification increasing their prices more than their less prestigious neighbours). But, crucially, this is an effect that one typically anticipates only in: (i) benign market conditions; and (ii) in a vintage that is clearly regarded as better than its predecessor.

The second of those conditions is clearly not met today; and the former is contested (though all of the Liv-ex indices are currently rising and have been doing so for some months). Putting this together, what is surprising is not price dispersion per se, but the extent of it.

It is difficult (impossible, I think) to recall a vintage in which some wines nearly doubled in price whilst others cut their release price, despite both having received similar critical acclaim.

It is also difficult to think of a vintage in which the increase in release price of the first growths was over five times that of the fourth growths – and, what’s more, in a vintage that is not generally regarded as better than its predecessor.

What we do know is that the early releases, above all that of Cheval Blanc, were very well priced (by any standard) and very well received. Demand was high and, in the case of Cheval Blanc itself, the wine sold out practically immediately. And this with a 20% increase in the amount of wine released despite a reduction in production (as Mathieu Jullien, commercial and marketing director of LVMH Vins d’exception, confirms).

My surmise is that the early success of Cheval Blanc and wines like Léoville-Barton and Lagrange (both of which released early and with prices well above the then average increase in release price) was influential.

These chateaux waited, watched, waited a little longer; and then finally released – either at, or just above, the price they had already settled upon before the campaign had even begun. Though their strategy was, of course, very different, I suspect that Cheval Blanc (as Jullien confirms) was far from alone in having carefully calculated its release price well before the campaign commenced.

The prices – and, above all, the price increases – of these typically later releasing wines, have brought ever greater and more vociferous howls of protest from the fine wine Twittersphere. 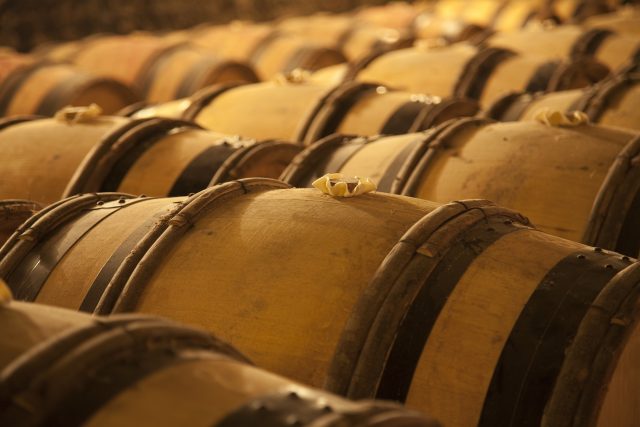 But the brutal reality is that for many of those now targeted by the Bordeaux bashers, their strategy has worked – at least for now. Many of these wines have sold well, albeit on the basis of a significantly reduced allocation (with typically 20-40 per cent less wine released to the market than in 2019).

The final two weeks of the campaign, though, still leave a bitter taste on many palates.

As Stephen Browett, Chairman of Farr Vintners, neatly summed it up: “Some of the releases towards the end of the campaign have been disappointingly high … Those that came out early at modest increases over their 2019 have sold well, as have the top-rated wines such as Canon. This was offered at a higher price than last year but it was justified given the quality and the increase in price (on the secondary market) of previous vintages”.

As he went on to explain, “overall we’ve only done around 70% of the business that we did in 2019 … this is down to less consumer demand, smaller quantities released and higher prices (too high in some cases)”.

The ‘super seconds’ have been particularly targeted for criticism. The following figure, replotted from Liv-ex data,  suggests why this might be so. It charts the evolution in release prices (again, in bond and in sterling for a case of 12 bottles) from 2016 to 2020 for a number of the super seconds and for Palmer, a thriving third. 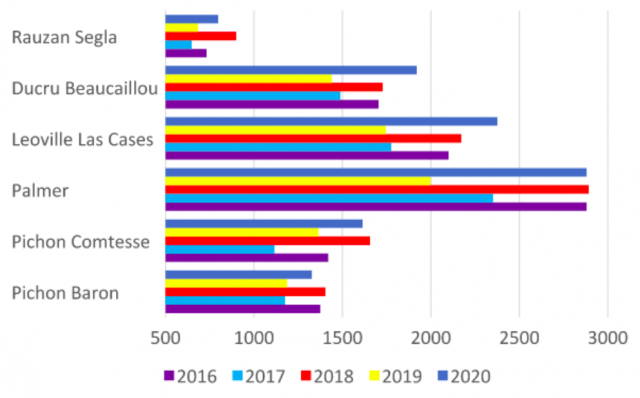 For Ducru and Las Cases, 2020 represents the highest ever release price; whilst for Palmer, Pichon Comtesse de Lalande and Rauzan-Ségla it is topped only by the 2018.

These are all unequivocally excellent wines with the critical acclaim to match; but their releases have met with a somewhat mixed reception – Rauzan-Ségla, Palmer and Pichon Comtesse selling comparatively well, the others less so.

As the Chairman of another of the UK’s leading en primeur specialists put it to me:

“Las Cases was probably the most bullish of them all. They expected the consumer to buy their 2020 at a higher price than the market value of any vintage in the last 20 years bar the 100 point (WA) rated 2016. That has proved a hard sell with zero customer response. We’ve not sold a single case”.

That may provide plenty of further ammunition for the Bordeaux bashers. But Las Cases is, as my informant was clear, but a single example and possibly something of an exception.

The list of wines that have sold well that were released at over 25% more than the equivalent price of their 2019 is quite lengthy: and it includes all four of the first growths to which it applies (Lafite’s release price was, of course, only a little over 15% higher than its 2019).

And this takes us to the crux of the dilemma. Bordeaux 2020 has seen a divergence in the release price strategies of the leading chateaux. And, for now at least, more than one strategy has worked.

It is tempting, in such a situation, simply to leave it to the market to decide. The logic of market discipline is very simple. If release prices are too high, the wine will simply not sell. But I think it discounts too readily the importance of reputational damage to Bordeaux.

It is no exaggeration to suggest that the final two weeks of the current Bordeaux en primeur campaign have served to damage significantly the reputation of en primeur and Bordeaux more generally, whether or not that damage is warranted.

As I have been told time and again, the impression is that Covid has been forgotten too soon by some in Bordeaux.

It may well also be the case that Bordeaux is held to a higher moral standard, in effect, than other prominent fine wine regions. I suspect that is true and has always been true. But, in the end, it is en primeur that puts it in such a position – and, quite frankly, those who live in the limelight need to be seen to perform better than those who don’t.