Moët & Chandon brings a golden taste of autumn with its latest vintage release, Grand Vintage 2013, a year when cold conditions led to a late harvest but created a ‘stunning’ expression.

First created in 1842, and now in its 75th iteration, each Grand Vintage cuvée is created from a selection of a single year’s most remarkable wine that reflects the cellar master’s subjective and emotional assessment of the personality and potential of each variety, while respecting the individuality of the particular vintage.

Benoît Gouez, chef de cave at Moët & Chandon, describes creating a blend for a Grand Vintage at the producer as “like working with photo negatives”.

He explains: “You can see shapes and contours, you may be confident in the result, but you cannot be certain what the photo will look like until after you have developed it.” 2013 was distinguished by its coldness, which delayed budburst and flowering, and resulted in a later than usual harvest, in October (the first time since 1991). The cold and wet winter was followed by a cool spring and warmer- than-normal summer, which pushed ripening into early October. Although the cool and slightly wet September made it a challenge to achieve maturity while keeping the vines in perfect health, the moderate yields of 13,000 kg/hectare worked in the vintage’s favour, resulting in a good level of maturity.

“By the time the wines were born, all of Champagne was a gleaming shade of gold: the vines were blond and brown, the trees, a burnt sienna, and the hills painted red and orange,” Gouez says.

Although it would have been obvious to produce a predominantly Chardonnay-based blend in a year famous for its Chardonnays, Gouez decided instead to focus on specially selected Pinot Noir grapes. These were found to be “complex but with a little less power and substance than usual”, following a more difficult end-of-ripening period. 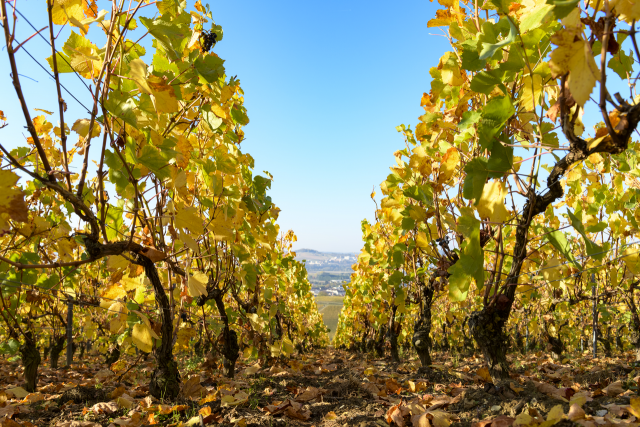 “We boldly decided to magnify the carefully chosen Pinot Noirs, which demonstrated an outstanding chiselled structure,” he explained. “That is why Grand Vintage 2013 has nearly equal parts Pinot Noir and Chardonnay.”

The 41% Chardonnay, 38% Pinot Noir and 21% Meunier assemblage gives “a dynamic blend that captures the singular character of a truly exceptional year”.

The wine’s maturity is immediately apparent, with autumnal notes of roasted chestnuts, toasted buckwheat, rich nuts, honey and nougat. Concentrated fruit is then revealed, reminiscent of preserved lemons, or a perfectly ripe nectarine. Scents of iodine, dried flowers and pine sap complete the aromatic bouquet. The palate is direct and energetic, supported by lively yet delicate acidity, and a finely chiselled structure, enveloped by a refined, grainy texture. The wine finishes with a pleasant hint of white grapefruit bitterness.

The extra brut Champagne has a dosage of 5g/litre and is available from selected retailers and bistros, where it pairs excellently with a tender veal rib or cooked cockles.

The Champagne House is also releasing its Grand Vintage Rosé 2013, its 44th rosé vintage. Described as having “generous aromas and a spicy fruitiness that defines its mouthfeel”, it is driven by the predominance of Pinot Noir (44% of the assemblage, of which 14% is red wine), the elegance of Chardonnay (35%), and 21% Meunier, with a dosage of 5g/l.

The voluptuous wine has initial notes of wild strawberries, raspberries and pomegranate, followed by a touch of acidity and spice, dried flowers and fresh leather. The structure of the Pinot Noir is accompanied by a sensation of crisp stone fruit and finely powdered textures and a long grapefruit finish. It pairs well with lobster dishes or passion fruit jelly.