To celebrate the iconic rapper and his hometown of Brooklyn, Budweiser has designed a series of limited-edition Tall Boy cans featuring the face and lyrics of Biggie Smalls. 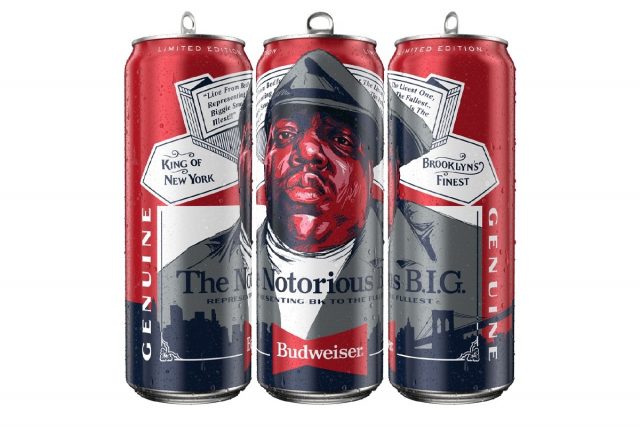 Every step I take. Every can I make…

Budweiser has released a series of collectible beer cans and merchandise featuring the late rapper The Notorious B.I.G.

A hand-drawn sketch of Biggie, real name Christopher Wallace, stares out from the Tall Boy cans, alongside motifs of the famous Brooklyn skyline and lyrics from B.I.G’s hit song ‘Unbelievable’, which read: “Live from Bedford-Stuyvesant the livest one, Representin BK to the fullest.”

The project is in collaboration with The Christopher Wallace Estate and symbolises an enduring love and respect for the artist, widely considered to be one of the greatest rappers of all time, who passed away in March, 1997, after being shot through his car window while his vehicle waited at a traffic light in Los Angeles.

“I am honoured to know that a brand such as Budweiser wanted to celebrate my son in this way,” Biggie’s mother Voletta Wallace said in a statement. “Christopher’s legacy and brand value is extremely important to myself and the family and memorialising him on the can of an iconic beer brand such as Budweiser is something I believe he would be happy with.”

Currently, the cans are thought to be available exclusively in New York, while supplies last. However, fans can get their hands on T-shirts, sweatshirts and sweatpants emblazoned with Biggie’s face and Budweiser branding through Shopbeer.com.

A live concert hosted by Budweiser is also set to take place in Brooklyn’s Prospect Park Bandshell on 19 August, to further celebrate the rapper’s life. Busta Rhymes, Lil Kim, and more are said to have signed up to perform.