World-renowned chef Alain Ducasse has collaborated with Japanese saké brewery Shichiken in Yamanashi to create a sparkling saké to complement his cuisine. 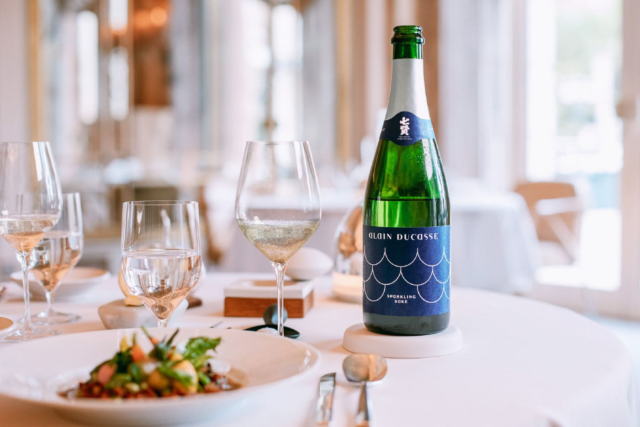 Joining forces with Japanese Shichiken saké brewery located at the northern tip of Yamanashi region, surrounded by Mount Fuji and the spine of the Southern Alps, the Alain Ducasse sparkling saké is made with the water from Hakushu and employs traditional saké brewing technique to create the base.

The saké is then aged in sakura barrels, which imparts a hint of sweetness and structure to the liquor, and lastly finished off with secondary fermentation in the bottle.

According to the brand, the tasting note suggests the sparkling saké is fruit-forward, underlying with a hint of sweet and bitter notes derived from the barrel. Overall the saké is gentle and goes along well with Ducasse’s dishes.

Gerard Marjon, executive chef sommelier of Alain Ducasse au Plaza Athens, spoke about the sparkling saké in a video showed on the product launch event in Japan on 22 March.

He said the saké showcases three flavour layers upon nosing: first it begins with a hint of white floral scent such as lily, followed by complex white fruit flavour and at the end there are intense and rich base notes with touches of cardamom and chilli pepper.

The texture of the saké is silky smooth while bubbles are fine and dynamic. Overall the saké is smooth highly complex.

Hailed as one of the pioneers to produce sparking saké, Shichiken released the first bottle of sparkling sake with secondary fermentation in the bottle in 2015.

In fact, this is not the first time for Ducasse to work on a saké project. In 2010, he worked with Nakamura Brewery Company, a brewer in Kanazawa City in Ishikawa Prefecture with over 180 years of history, and released the Nichiei Alain Ducasse Selection.

Priced at JPY5,000, the sparkling saké will officially released in the Japanese market on 29 April.