With UK restaurants having been shuttered for much of the past year, chefs have been quick to pivot to deliveries, and the offering out there is getting increasingly sophisticated, as a growing number of top chefs throw their toques into the ring.

One such chef is foraging fanatic Simon Rogan, who launched Rogan at Home last year and is now whipping up over 700 three-course meals a week from his two Michelin-starred base at L’Enclume in Cumbria, while his Soho spot Aulis has been busy catering to the London crowd.

Rogan’s L’Enclume offering is available nationwide from Friday to Sunday, and consists of a three-course menu that changes each week and makes use of ingredients from his farm in Cartmel, so expect seasonal twists on some of his signature dishes.

The Aulis set up, meanwhile, caters to Londoners living in zones 1-3, or those willing to venture to the chef’s table venue in Soho to pick up their grub. Both experiences cost £45 along with a £10 delivery charge.

With Rogan having long impressed me with his punchy flavours, pretty presentation and ethical ethos, my expectations were high. The food was delivered in an eco-friendly brown paper bag tied with a gold ribbon; the different elements of each dish packaged separately in brown paper boxes.

On seeing so many paper boxes piled up in the bag, I wondered whether there had been a mix up with the deliveries, but soon realised they’d sent me enough food for two. I unpacked the boxes and spread them out on the kitchen counter.

There were 15 different elements in total, including little pots of puffed buckwheat and kale crisps. I started to fear that I might have been sent the Inception of meal kits, but the step-by-step video, accessed by scanning a QR code on the front of the menu, makes the compilation challenge a lot simpler.

Seeking plating inspiration, I fired up the video and was greeted by the friendly face of Aulis head chef Charlie Tayler, who walked me through the stages of plating up the starter – trout dressed in coal oil with turnip purée, pickled turnips, hazelnuts and kale crisps.

Having been sent enough trout for two, I flung all the fish on the plate. I say flung, but the plating up experience brought out my ODC. I was unable to assemble the dish with Tayler’s casual confidence, and instead started shaping the trout into a star pattern, dolloping the turnip purée in exacting intervals and carefully placing a hazelnut in the centre of each.

It was fun playing chef for the night, and I felt obliged to try to create as pretty a plate as possible to do the ingredients justice. The coal oil makes the dish, lending a wonderful smoky depth to it, but needs to be used sparingly. 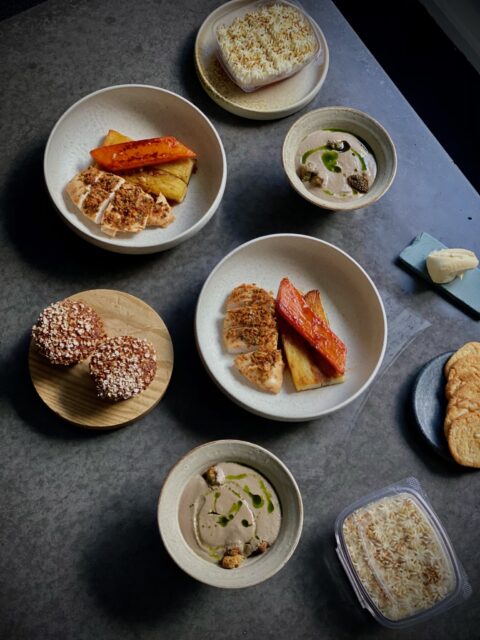 As I hoped it would, the starter encapsulated everything I love about Rogan’s cooking, with its attention to texture, from tangy pickled turnip to crispy kale, clever balancing of flavours and use of ingredients that shout proudly of what they are.

Mention at this point must be made of the bread. The kit included a pair of dinky soda bread buns and a serving of cultured butter. The simple union of the sweet, fluffy bread and the rich, creamy butter was utterly delightful and reminded me that the mark of a good restaurant is often its bread.

For the main event I bypassed the glazed beef cheek, opting instead for the vegetarian offering – a truffle pudding with truffle cauliflower cheese and braised red cabbage. The dish was easy to put together after a brief blast in the oven. Requiring less finesse in the presentation department than the starter, the dish also lacked its elegance.

I can see how the elements would have worked more harmoniously with the beef cheek in the mix, but the slightly stodgy truffle pudding didn’t marry well with the cauliflower cheese, as they were both vying for dominance. Truffle pud aside, I loved how brazenly cheesy Tayler dared to go with the cauliflower cheese, the warming winter spices of the cabbage, and the welcome crunch of the puffed buckwheat.

Satiated at this point, I saved the dessert – a wonderfully retro black forest gateau – for the following evening, when I also polished off the second serving of cauliflower cheese with some crispy bacon and the last of the hazelnuts from the starter, which proved a joyously comforting feed.

A lot of effort had gone into the gateau, which included chocolate sponge, a chocolate and salted caramel mousse, a sour cherry compote and a chocolate glaze shimmering on top like crude oil. Almost audaciously decadent, the richness of the chocolate was cleverly balanced out by the sour tang of the compote running through it.

The kit also came with a packet of freshly made chocolate chip cookies, which I happily devoured with my morning coffee the next day. Being a meal kit novice, the overall experience was intriguing, and felt like a glimpse into the future of high-end at-home dining.

Rogan’s portions are generous, and £45 a head is good value for the quality of the food on offer. While a meal kit will never replicate the feeling of being in a restaurant – nor are they trying to – they’re an exciting addition to the UK’s culinary scene, and I’m sure they’ll be around long after the virus has been given its marching orders. For more information on Simon Rogan at Home or to order, click here.