Born in Salisbury, Tom Kerridge started out as a child actor before falling into cooking. Having trained under the wing of Gary Rhodes, he opened The Hand & Flowers in Marlow with his wife Beth in 2005, which today is the only pub in the world to hold two Michelin stars. He also runs a second Marlow gastropub, The Coach, which holds a Michelin star, and The Butcher’s Tap; a pub and butchers rolled into one. A regular on Great British Menu and Saturday Kitchen, in 2018 he opened Kerridge’s Bar & Grill inside the Corinthia Hotel in London. He also fronts a number TV shows, including Food and Drink. This month he announced a partnership with British Airways to create a new range of short haul food for the airline. 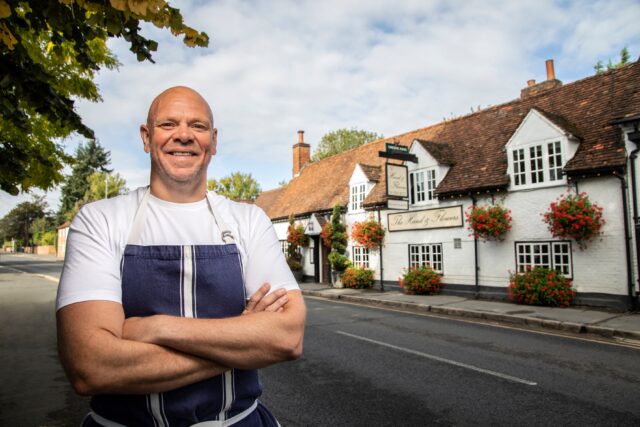 Eating corned beef and English mustard sandwiches on a Saturday evening while watching The Pink Panther on TV aged about seven.

It was very much an accident. I didn’t really have any aspirations for any career, but always knew I would be okay. I found a kitchen job at the age of 18 washing up and cooking has stayed with me ever since.

I don’t think that there are any dishes that are yours and are brand new. I am prouder of the produce that I use and for it to sing for itself.

What is your ultimate food and wine match and why?

I’m a non-drinker, but I do think in terms of food and drink matching. There isn’t anything much better than black coffee and chilled dark chocolate.

It was about seven or eight years ago in Singapore, eating from street vendors at 3am with chefs and journalists after being involved in a food festival. The best dish was crispy spiced aubergine and I was drinking Diet Coke!

Again in Singapore – durian fruit, which is very much an acquired taste and really not my thing. It smells really bad.

The Roux brothers, because without them there would be none of us. They were pure gentlemen who knew how to run a business and make their guests feel like royalty.

I once left 10 loads of foie gras in the oven on a gentle heat and went on a break and forgot all about them. By the time I got back they were liquid.

I love all of them, but I think autumn is great. It’s a time for heartier flavours where braises and root vegetables come into play that suit my more robust style of cookery.

Salt – seasoning is so important.

I like convenience food, but my guilty pleasure would be simple things like great cheese and charcuterie that are so easy to grab from the fridge.

British, of course – cooked in the style of French cuisine for stocks, sauces and dairy etc. The produce that we have in the UK is first-rate but also incredibly defined by our seasons to create a different type of cookery throughout the year. British cuisine is eclectic, rich and culturally diverse – arguably the best of world cuisine!