The study of several perfectly preserved Roman-era wine barrels found in Reims has allowed archaeologists to further study how these vessels were constructed, what they were made from and the part they played in the ancient wine trade. 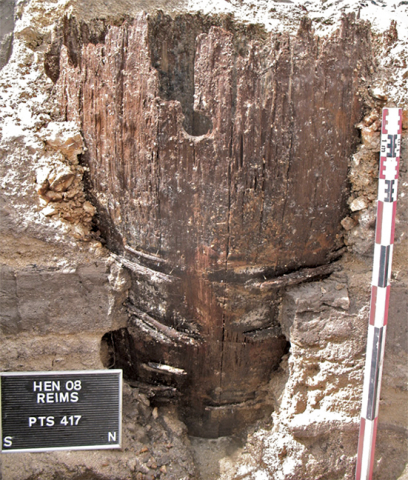 The three barrels were discovered in 2008, along the right bank of the river Vesle which runs through Reims, as part of an archaeological excavation.

Dating from the 1st century AD to 4th century AD, the three barrels were in an “outstanding state of preservation” and were being used as water butts at the end of their working lives.

Trace analysis of the barrel staves, however, revealed the tell-tale remains of malic and tartaric acids which are common indicators of alcoholic fermentation.

Furthermore, there were markings on the barrels that indicated they had been used in the wine trade before they were eventually repurposed.

Such was the state of their preservation that the researchers have been able to identify how the barrels were put together and where all the component parts were from.

For instance, the wood used in their construction was not oak but European silver fir (Abies alba). The staves were then shaped, as they are to this day, by tools such as the doloire, adze and croze, the marks of which are still clear on the interior of the staves.

The hoops were made from hazelnut saplings which were fastened in one instance (barrel 354) with esparto grass which, unlike the fir and hazelnut, is not native to northern Europe but the Mediterranean. The other hoops were tied with cord which was likely procured locally.

The barrels had also been sealed in places with pitch, which it is known was produced in this period by pyrogenation (distillation) of pine wood.

The barrels are also covered in all manner of marks and stamps that were either struck or branded on by the makers and later owners of the barrels (again as modern examples are).

A total of 45 marks were found on the three barrels. As the researchers explained in their findings: “Stave makers used these marks, specific to their craft, to mark their work with their name or that of the workshop owner, thus fixing its quality and cost, doubtlessly during organised sales. The cooper who assembles the staves in his workshop leaves another type of mark, called a reference mark, which is used on the workbench to ensure the best possible juxtaposition of the staves.

“The assembling was entrusted to a master craftsman, as the strength, sealing and durability of the barrel depended on him. Once the barrel was assembled, the cooper branded his mark on it with a hot iron. These large branded cartouches appear as a highlight on the bottom of the barrels, often positioned transversely and encompassing two staves, as well as directly above the bung hole.”

In addition, the wine merchant who owned the barrels would also mark them so that barrels could be sent to the wine supplier who would then fill the barrel and return it to the merchant in question.

As the report continued: “The branded marks of the wine merchants regularly appear as seals on the bungs at the bilge of the barrels. Once the barrel was filled, it was mandatory to add a mark. This is the case of the ‘COSAT’ branded mark of vat 378 of the Reims site, which was repeated three times, with the seals half on the bung and half on the vents.”

Furthermore, should the merchant have pre-sold a barrel, marks were sometimes added to designate the end customer, while those who shipped the barrels (and much of the wine trade was riverine) would also stamp it.

In addition, several of the staves bear graffiti scratched into the staves on the outside, much of which are names and when followed by the word ‘fecit’ (Latin for ‘made it’), this likely indicates the winemaker themselves.

In some instances the type of wine and quantity shipped is also noted and these include wines for the army as well as merchants and tavern keepers, with barrels being used for multiple purposes over the course of their lives, which various studies have been unable to determine precisely but could be as long as 25-30 years.

The researchers concluded: “It thus becomes clear that many different agents in the wine sector were involved. This network brings together winegrowers, craftsmen, merchants, sponsors, transporters and sworn agents in circulations of remarkable geographical, provincial and economic scope, based –as was the ancient textile industry– on the collaboration of a very large number of specialised craftsmen.”

The remains of the barrel are on display in Reims as part of an exhibition funded by Champagne Taittinger.

These are not the first barrels of their type to be found, other examples have been discovered from the UK to Hungary and Romania, but due to their organic nature they are rare and their discovery therefore always noteworthy.

The wine trade in the Roman Empire, indeed across the ancient world at large, was a thriving industry but while pottery vessels, the famous amphorae, were mostly used across the Mediterranean, in more northern climes barrels – which were being made by the Celtic peoples before the arrival of the Romans – were the more usual containers.

It is striking that with the exception of some barrels found at a site near Marseille, no Roman-era barrels have (so far) been found south of Lyon, nor across the Pyrenees into Spain or Alps into Italy or Adriatic coastline.

Driving home the point about the importance of rivers in the ancient wine trade for transporting goods, the majority of barrels have been found along major waterways such as the Rhône, Rhine, Danube and Mosel.

For the full report in English and French click here.