Greece is one of the oldest wine-producing regions in the world, and yet in modern winemaking terms recognition on a global scale has eluded its winemakers. 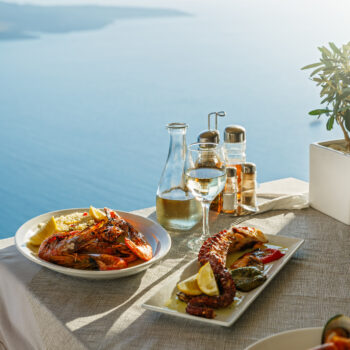 Its ancient heritage for winemaking is well known, but its viticultural story has more often that not been resigned to history books, rather than the international wine stage. It’s not due to a lack of quality, but perhaps an unfortunate stereotype, combined with a somewhat introverted wine industry, that is to say, domestic rather than internationally-focused.

Writing in his book The Wines of Greece, Konstantinos Lazarakis MW, explains: “I often see old friends at wine fairs in France, the UK or the US. Even today, when I invite them over to the Greek stands to taste some wine I frequently get the one-line response, ‘I do not like retsina’, as an answer. And it is wine professionals I am talking about here, so this just goes to show the huge amount of work the Greek wine industry needs to do in order to convince the world of Greece’s worth as a wine-producing nation.”

Greek winemaking has developed massively over the past decade, helped by the fact that many of the country’s winemakers have been trained outside of Greece. Careful handling of international varieties in blends is also helping the country to gain traction with an international audience. Its indigenous varieties are also gaining ground, with grapes like Xinomavro, Assyrtiko and Agiorgitiko becoming widely recognised in their own right. While huge marketing efforts are underway to convince consumers, and the trade alike, to give Greek wines another try.

It seems to be working. Greek wines might not be a supermarket staple just yet (although many do carry limited examples), its wines are appearing more and more frequently in the portfolios of top independent and specialist wine retailers, including The Wine Society, Majestic, Laithwaite’s and beyond.

The picturesque island of Santorini remains a big name in Greek wine, famed for the Assyrtiko grape, as well as the northern mainland, which is home to rising regions including Macedonia (Naoussa PDO, Amyndeon PDO), and the southern Peloponnese (Nemea PDO). Elsewhere the island of Crete (including the PDOs of Dafnes, Sitia, Peza, Archanes) is cementing its own winemaking reputation, taking advantage of its mountainous landscape and high-altitude vineyards.

Greek wine is increasingly hitting the mainstream, and its producers are working hard to remind consumers, and the trade alike, of its winemaking prowess. 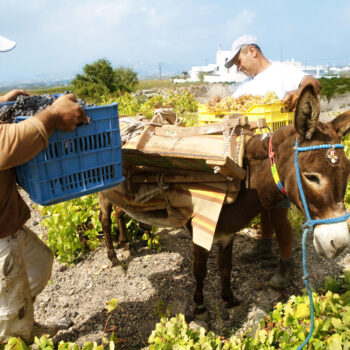 Santo Wines is one of the biggest wine producers on the island of Santorini, with a history dating back to 1947, when The Union of Santorini Cooperatives (SantoWines) was first established. Today it represents some 1,200 grape growers across the island, producing wines under the Santorini PDO, as well as sparkling wines and island’s famed dessert wine Vinsanto.

Known for its volcanic soils, Santorini’s vineyards benefit from a combination of lava, volcanic ash and pumice stone while its vineyards are dry-farmed, resulting in low-yields and concentrated fruit. Work in the vineyards is done by hand, with many of the island’s vines clinging to steep terraces, built with lava stones known as ‘pezoules’. A unique method of vine training is also used, called ‘kouloura’, whereby vines are trained into a basket shape, close to the ground, which protects grapes from strong winds.

Santorini is the home of the Greek white grape Assyrtiko, which is also Santo Wines’ flagship grape. Produced dry, it can result in bone-dry expressions with concentrated citrus aromas and a steely, mineral edge, and is also famed for its blending with the aromatic varieties of Aidani and Athiri to produce Vinsanto – a dessert wine made from sun-dried grapes. As well as its Santorini PDO label, Santo Wines also produces a specialty wine under the Irini label, a dry 100% Santorini PDO Assyrtiko, oak fermented and aged for 18 months in ex-Vinsanto French oak barrels.

Santo’s wines are available in the UK via retailers including Maltby & Greek, Borders Wines and The Greek Wine Shop. 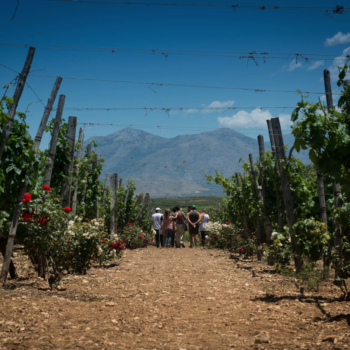 Founded in 1966, Domaine Lyrarakis, is based in the mountainous region of Alagni south of the city of Heraklion, in Crete. Vidiano and Kotsifali feature prominently, but the team also produces a vast array of indigenous varieties, including Plytó and Dáfni, which the domaine helped rescue from obscurity, and near extinction, when they were planted in its Psarades vineyard at 480m in central Crete in the early ‘90s.

The name Dáfni comes from the laurel (bay leaf) plant, which is called Dáfni in Greek. Consequently, wines produced with the variety are aromatic with a distinct herbal character and citrus fruit backbone. Other varieties include Mandilari, Assyrtiko, Vilana and Thrapsathiri, alongside the more recognisable Syrah, Cabernet and Merlot. Its Lyrarakis Red is a blend of Kotsifali and Syrah, while the Estate White is a blend of Muscat of Spina and Vidiano. Its single vineyard range includes its Ippodromoas label, which is a 100% Vidiano from a mountain-side vineyard of the same name situated at 610m.

Its wines are available in the UK at both Majestic, Laithwaite’s, Master of Malt and Berry Bros & Rudd.

The Alpha Estate in located in the northern Amyndeon PDO region – Greece’s highest, coldest and smallest appellation. The estate benefits from sandy alluvial soils due to the fact that the region was once a lake, the remnants of which help moderate the region’s semi-continental climate.

The estate was founded in 1997 by viticulturist Makis Mavridis and oenologist Angelos Latridis, who trained in Bordeaux and also has a chemistry degree from the University of Thessaloniki. Alpha is one of Greece’s biggest single estate producers, and also considered the most cutting-edge in the region. Since its foundation, the estate has invested upwards of €25 million, which has resulted in infra-red drone cameras to monitor the harvest and underground irrigation across its vineyards, which includes 100-year-old Xinomavro vines. This high acid, high tannin grape, which translates as “acid/sour black”, is often compared to Nebbiolo due to its ability to develop complex earthy aromas with age. Other varieties planted include Mavrodapnhe, Syrah, Merlot, Pinot Noir, Tannat, Montepulciano, Negro Amaro, Barbera, Malagouzia, Sauvigon Blanc, Chardonnay and Gewürztraminer. 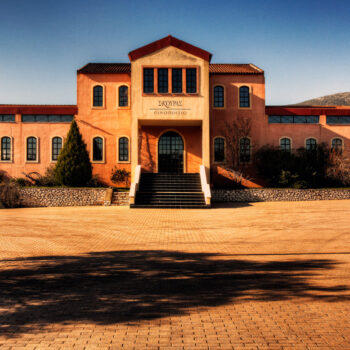 Domaine Skouras was founded by George Skouras in 1986 (situated in the Nemea PDO, on the Peloponnese peninsula south of Athens), fresh from studying oenology in Dijon and working in both Champagne and Italy. Having trained with international varieties, including Cabernet Sauvignon, Skouras returned home determined to apply his knowledge to the Greek variety of Agiorgitiko, a red variety capable of producing wines from a very light rosé to barrel-aged full-bodied reds.

Skouras used a blend of Agiorgitiko (80%) and Cabernet Sauvignon (20%) to produce his first flagship red, Megas Oenos, which remains one of its key labels. While one of the most widely planted varieties in Greece, its pronunciation is perhaps the most challenging of all Greek grapes, which prompted Skouras to change its name to “St George” in some markets to make it easier to sell. Other wine labels include its Armyra label, a blend of 95% Chardonnay with 5% Malagousia, and Salto, a dry white made from the Mavrofilero variety and fermented with wild yeast. The Skouras winery itself is ultra-modern and open to visitors, who can wander through its vast tasting halls and admire its art, of which Skouras is a keen collector.

You can track down its wines at retailers including Jeroboams, House of Townend and Majestic. 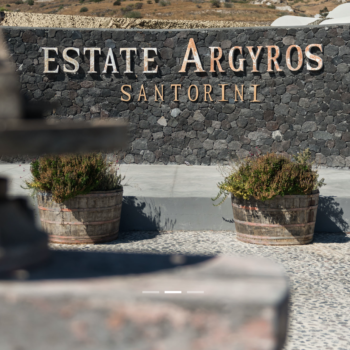 Estate Argyros was founded in 1903 and is today run by fourth generation winemaker Matthew Argyros in the Episkopi region of Santorini. It comprises 120 hectares of ungrafted vines, predominantly planted to Assyrtiko, but also Aidani and Mavrotragano. The vines are on average 70-years-old, but with some over 200 years old – among the oldest on the island.
It’s flagship label is its Argyros Santorini Assyrtiko, which is hand harvested and fermented in stainless steel vats, producing wines with high acidity and distinct salinity, alongside an oak fermented Assyrtiko, aged for six months in French oak. It also produces a white wine from Aidani, a grape indigenous to Santorini that offers notes of “tropical fruits, scented herbs and flowers”, fermented in stainless steel vats.
In 2015, it completed work on a new winery and visitor centre, and is one of the most modern wineries on the island, offering a number of tours and tastings to visitors.
Argyros’ wines can be found in the UK at Tanners Wine Merchants, Fortnum & Mason and specialist retailer Greece and Grapes. 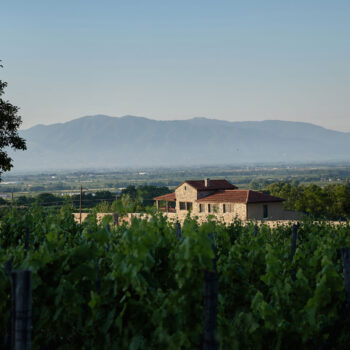 Widely considered a rising star of Greek winemaking, Apostolos Thymiopoulos has taken his family’s vineyards to the next level since his first release in 2005. While his family has been growing grapes in the PDO region of Naoussa for generations, selling them to local wineries, Apostolos was the first to take the grapes and vinify them himself, after studying oenology in Athens. Apostolos released the family’s first label, Ghi Kai Uranos (Earth and Sky), from the 2003 vintage, in 2005. This label is made from 100% Xinomavro blended from the best parcels across the family’s two vineyards, with vines aged upwards of 44 years, and aged for 18 months in third-use, 500-litre French oak barrels. The family’s two vineyards, both in the PDO region of Naoussa are called Fytia and Trilofos, which are farmed using organic and biodynamic methods and benefit from the region’s warm continental climate and cooling winds from Vermio mountain.

While many Greek winemakers incorporate internationally recognised varieties in their portfolio, the Thymiopolous family is dedicated solely to Xinomavro. It counts 10 different 100% Xinomavro expressions in its portfolio, including a rosé, in an effort to extract the very best expressions from specific parcels throughout its estate. One label to have caught the attention of the international market is its Xinomavro Young Vines (available through The Wine Society), which is a blend of higher altitude parcels around the village of Fytia and the warmer, lower elevation parcels in its Trilofos vineyard, aged for 8 months in concrete tanks.

Its wines are available from retailers including The Wine Society, Waitrose Cellar, Hennings and Corney & Barrow.