Château Mouton Rothschild has commissioned Chinese artist Xu Bing to provide an artwork to grace the label of its 2018 vintage. 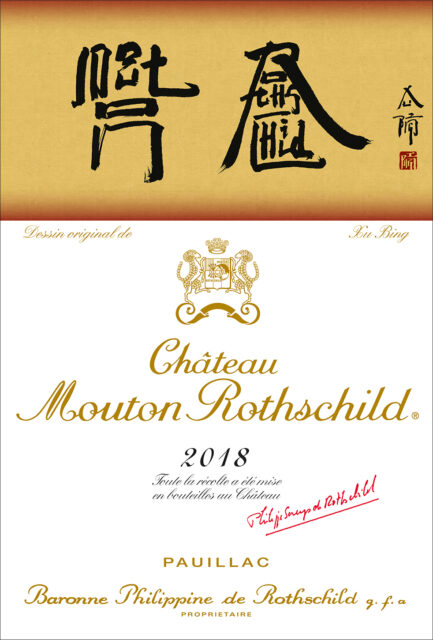 Considered one of China’s most important contemporary artists and a master of traditional calligraphy and printmaking, Bing created a unique trompe l’oeil for the label design.

He used square word calligraphy to create what looks, on first impression, to be traditional Chinese characters but which are, on closer inspection, the words ‘Mouton’ and ‘Rothschild’ in the Latin alphabet.

As the Pauillac first growth said in its announcement: “The characters in the artwork are designed by Xu Bing to reveal themselves to the attentive reader one after the other, in the same way that the aromas and flavours of a very fine wine, with patience, are also gradually discovered.”

Julien de Beaumarchais de Rothschild commented: “When I discovered Xu Bing, I was captivated by him as an inventor of signs endowed with incredible poetic power.

“And then I said to myself that our labels were also signs, each work of art referring to a year: the 1973 vintage can also be called the ‘Picasso Mouton’, just as the 2018 vintage will be called the ‘Xu Bing Mouton’.”

Bing himself added: “I have long been aware of the close connection between Château Mouton Rothschild and art. In 2013, I had the good fortune to be invited to Mouton Rothschild by Baroness Philippine de Rothschild. I was impressed by her energy, her warm personality and her knowledge of the arts.

“She said that one day I should create a label for Mouton Rothschild. So when Julien de Beaumarchais de Rothschild contacted me to illustrate the label for the vintage 2018, I took it as both an honour and an opportunity to pay tribute.”