Wine trade gives thanks to man who ‘built Bollinger’

It was standing room only at Southwark Cathedral this morning for a thanksgiving service for the man who “built the Bollinger brand” in the UK, Simon Leschallas.

In a service that was littered with jokes and anecdotes, along with rousing hymns – and topped off with a glass of Champagne Bollinger – was a brilliant eulogy given by Simon’s great childhood friend Bertie Gore Browne.

As part of this, Gore Browne recorded how Simon had employed his “great sales and marketing skills” to establish Bollinger as a powerful Champagne brand in the UK from the early 80s onwards, primarily by associating it with high-profile sporting events, particularly cricket and golf.

“The Bollinger brand was built by Simon… so much so that the name Bollinger because synonymous with great sporting events,” he said in his address, before recording that Simon had died on the first day of this year’s Open Championships – the first time he had missed this great golfing occasion for 14 years.

Gore Browne then described Simon as “one of the most respected and trusted members of the wine trade”, noting that over 40 drinks companies were represented among the congregation at the service this morning.

Commenting more generally on his character, Gore Browne said, “You only had to meet Simon once and you knew you had a friend for life.

He also recorded Simon’s “natural charm”, while calling him “unfailingly polite”, and said that he was “a true giver in every sense of the word”, as well as a “devoted family man”.

Recalling that his nickname was “the tank,” he joked that this either meant a “heavy, armoured fighting vehicle” – “and he was certainly that” – “or a large storage container full of gas or liquid”, adding that this was “undeniable”.

Finishing the eulogy, Gore Browne asked the congregation to raise an imaginary glass of Bollinger and toast “the loveliest man that ever existed”.

Meanwhile, Simon’s children spoke movingly about their father, commenting how his “great joy” was seeing “anyone and everyone happy,” while recalling how “daddy taught us how to have fun, and be generous with your time.”

Finally, Canon Mark Oakley, who is Chaplain to the Worshipful Company of Vintners, said that Simon was “full of anecdotes that shocked and delighted in equal measure,” before recalling his “big smile”, and “twinkling eyes”.

“Simon”, he continued, “was someone to draw you in, and make you belong… and he was someone with depth, and soul.”

Concluding, he commented, “It has been said to me that Champagne was built on great characters, and he was one.”

As previously reported by the drinks business, Simon had died suddenly of a heart attack aged 64 on 18 July this year, leaving behind his wife Jo and young family.

Simon started his career working for Blue Circle cement in Cheshire, before following in the footsteps of his father Anthony Leschallas, and joining Bollinger-importer Mentzendorff in 1978, where Simon remained a director for 29 years.

Simon was also a past master of the Vintners’ Company and the Worshipful Company of Distillers, as well as a former chairman and trustee of drinks trade charity The Benevolent and a trustee of the Wine Trade Sports Club. 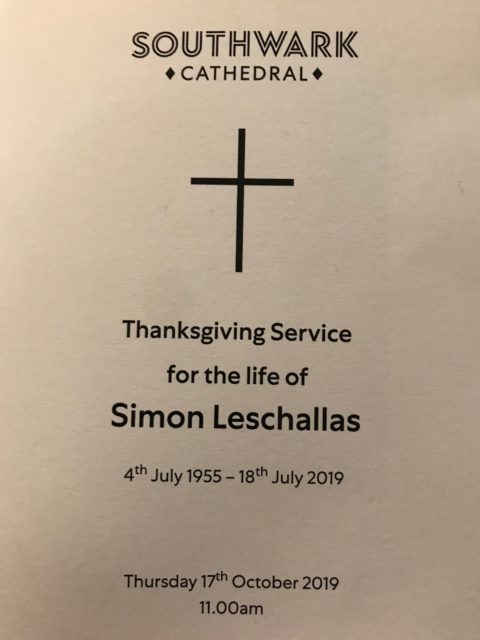