English drinks producer Chapel Down has recorded a combined sales rise of 10% for the year ending 31 December 2018, and expects to produce 2.4 million bottles of wine on average by 2024. 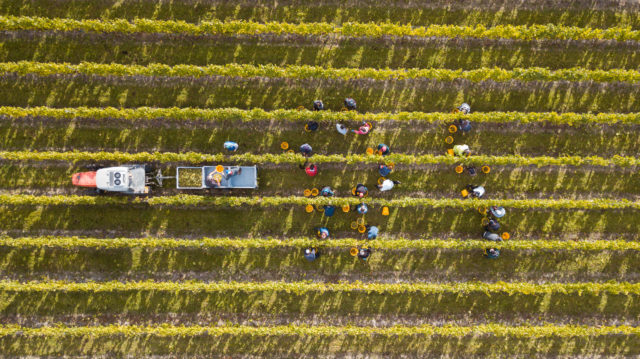 Kent-based Chapel Down submitted record results in 2018 in year which saw it plant and lease new vineyards, take on a new brand facility in London and build up its beer and cider portfolio.

Gross profit for its wine and spirit division in 2018 was up 12% to £3.626m while its beer and cider was up 1% to £1.229m. In a statement, it was noted that the company was looking to develop long-term export opportunities, particularly in the US. Last year was its second full year in the country and growth was “limited only by [its] production”.

The company has recently opened its long-awaited brewery bar, shop and restaurant in Ashford. The 2,900hl brewery will be able to produce more than 9,000 pints of beer a day. It is headed up by Matthew Anderson who has spent over a decade working in beer roles at AB InBev.

Chapel Down has also released a number of new products this year including a Pinot Noir gin and a sparkling Charmat method Bacchus.

Last year, its wine and spirit sales rose 11% to £8.98m. The brand’s products are distributed to national retailers including Waitrose, Sainsbury’s, M&S and Majestic and across the on-trade via Matthew Clark and Bibendum. Sales at its onsite shop increased by 17% to hit £1.72m.

As well as working with 24 partner vineyards, Chapel down planted 102 acres of vines last year, taking its total planted on long term lease land to 274 acres since 2015. The company now has a total of 635 acres of vineyards and last year took out a lease on a further 388 acres on the North Downs, which will be planted over the next two years. This will take its total area under vine over the 950-acre mark, which will be in production by 2024/25. This means that in an average year, Chapel Down will be able to produce a total of 2.4m bottles.

CEO Frazer Thompson said that the company has chosen to tackle the risk of extreme weather events by sourcing grapes “from a wide geographic area”.

Sales in its beer and cider division, Curious Drinks, rose 10% to £4.039m. The range is distributed nationally via Majestic and Waitrose in the off-trade and through Matthew Clark in the on-trade. It launched a canned beer in 232 Tesco stores across the UK, which is now also being sold in regional Co-op outlets from the start of this year. The producer also supplies pub groups including Mitchells & Butlers, Greene King, Ei Group and Fullers.

Thompson said that Brexit has had “no significant impact on our business to date”. However, he noted that the company may be affected if access to EU or other foreign workers for viticultural labour is disrupted, and as a result, the company will be “trailing the latest mechanical picking technology in 2019”.

Speaking about the company outlook, he added: “We have to be the only people who can do what we do. That excites us and that’s what makes our brands stronger.

“The launch of Kits Coty premium wines and the consumer and trade interest in Chapel Down will continue to fuel the English wine market, interest in which shows no signs of abating and we are planting for the future. We remain appropriately optimistic about continuing growth in sales in 2019.

“Beer and cider growth will be accelerated as we build out the brewery and create more interest and engagement around the Curious brand. Recent listings in Tesco and on trade chains are exciting.

“Our Chapel Down gins and vodka, which uses the skins of our grapes, are performing well in a growing gin and vodka market that shows no sign of slowing. Already listed nationally in all Majestic stores they are now also available in leading accounts such as Le Gavroche, Roux, Le Manoir aux Quat’Saisons, Paris House, The Ned, Hospital Club, Hix, Selfridges and Harvey Nichols.”