Sara Rossi joined Adam Byatt’s Michelin starred Trinity in Clapham as head sommelier following almost a decade’s experience in wine hospitality. Arriving in London in 2010, Rossi worked as sommelier at the Cut Restaurant in Park Lane and at Restaurant Gordon Ramsay, as well as assistant head sommelier at Restaurant Fera within 5-star hotel Claridge’s.  At Trinity, Rossi oversees an extensive wine list with a focus on old world regions, particularly Burgundy and Bordeaux.  Working in collaboration with a wide selection of classic appellations and hand-picked producers, as well as small independent winemakers, Rossi organises monthly wine dinners as well as all new and existing suppliers and stock including Chef Adam Byatt’s CCW (chef cellar wine) range. 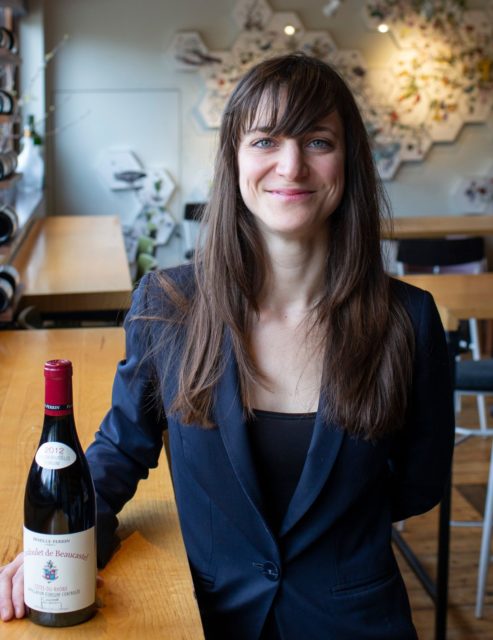 When I came to London in 2010 I worked in a natural wine bar in the city where I met Juste Karbauskaite from Lithuania.  She passed on her passion of wine to me.

Firstly, recommending wine to the guest. I enjoy talking to them about the producer and style.  I also find wine pairing really rewarding.

I feel that to be a sommelier is not about being on the floor, it’s about sacrificing your time outside of work to attend wine tastings and read.  There are so many trends to keep up with.  You have to combine your palette with theory – it’s like a sport and you have to practice.

A Lambic Gueuze from Cantillon in Belgium.

Too many actually!  It would have to be a wine tasting with a winemaker.  At the time I was a commis sommelier.  I was very nervous and didn’t realise that the wine was corked.

If you could give your younger self advice when starting out as a sommelier, what would it be?

Work hard and study more!  Also travel more – you learn much faster if you see with your own eyes rather than through a book.

Barolo from traditional producers.  I could see how the grape changed over time.  When it’s young its too tannic and you have to wait for perfection with violets, black fruits and truffle.

A wine trip to Friuli Venezia Giulia.  The producer Fulvio Bressan and his wife welcomed me into their home.  We started at 5pm and finished at midnight – we drank back vintages of Pinol 1997, talked about philosophy and religion, there were no secrets.

Nothing in particular.  I believe in being patient and emphatic – maybe someone’s had a bad day.

My father – he’s a chef in Italy.  When I was young, I sometimes went to help him in his restaurant in Prato, Tuscany.

A dish we have at Trinity. A beef tartare with pickled mushroom, smoked bone marrow and Oscietra caviar, with smoky and earthy flavours. Paired with a Muscadet de Sèvre et Maine 2014. It’s 100% Melon de Bourgogne, and the salinity and bready yeastiness goes well with the soy sauce in the dish.

A photographer.  I would travel the world photographing everything I saw.

At the moment I don’t fancy overly oaked wines which are too overpowering.

The actor Will Smith.  He’s approachable, funny and humble.  It was a pleasure to meet him.

What makes you most proud to be a sommelier in London?

The possibility to taste wine from around the world.  There’s always so many events and tastings going on.  You get to meet people who share the same passion.

My colleague tells me that Trinity does an amazing salted caramel custard tart, what would you pair that with?

I would pair it with a Sauternes Chateau Lafon 2016.  It’s not very luscious and has a lovely, refreshing acidity that will clean your palette.