Second phylloxera outbreak in a month detected in Victoria

A new phylloxera outbreak has been detected in Victoria, following a prior outbreak earlier this month, prompting Agriculture Victoria to extend its Maroondah Phylloxera Infested Zone (PIZ) further.

On 1 March, an outbreak was detected within a commercial vineyard in St Andrews in the Yarra Valley, Victoria, within a then designated Phylloxera Risk Zone (PRZ).

At the time Vinehealth Australia CEO, Inca Pearce called this latest phylloxera outbreak in Victoria a “concerning development”, which highlights the “critical role that industry must play in preventing further spread”.

A further industry notice was posted on 25 March, less than a month later, advising of a second outbreak detected at Coldstream, inside the existing Maroondah Phylloxera Infested Zone (PIZ) in the Yarra Valley, Victoria.

The strain of phylloxera detected has been confirmed as G1; the same as that found in the Maroondah PIZ and at St Andrews.

In response to the recent detections at both St Andrews and Coldstream, two extensions to the current Maroondah PIZ boundary have resulted.

The process of formally declaring the new Maroondah PIZ is underway. In the interim, these two new extension areas to the Maroondah PIZ are considered phylloxera infested zones for the movement of regulated products.

Phylloxera is an insect pest that can have a devastating impact on grapevines, affecting Vitis species. There are currently 83 endemic strains in Australia that are confined to a number of wine regions in parts of Victoria and New South Wales, representing a “major threat” to the vast majority of Australia’s vineyards that are planted on own roots, which are highly susceptible to attack by the pest.

Agriculture Victoria is urging winemakers in the region to remain vigilant and to ensure preventative measures are in place to prevent the movement of pests, diseases and weeds, including phylloxera, as part of their shared responsibility for biosecurity.

This includes implementing strict farm gate hygiene practices to prevent the entry of phylloxera or other pests, diseases and weeds into your vineyard, as well as recording the wine regions where all visitors to your site (including their machinery/equipment) have been in the past three weeks, so that you can assess the risk they pose to your vines by determining whether they have been in a PIZ or PRZ. 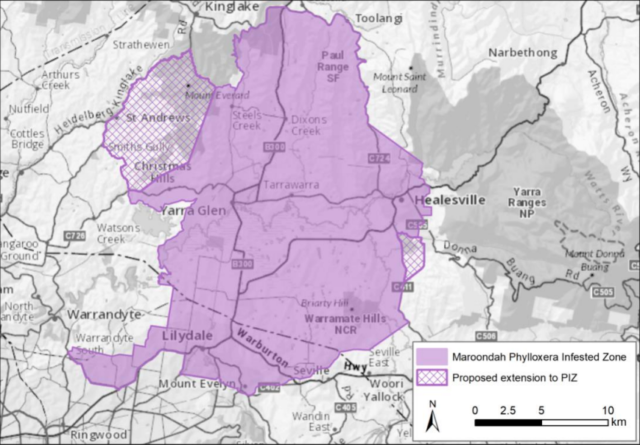 For more information on this most recent outbreak, click here.