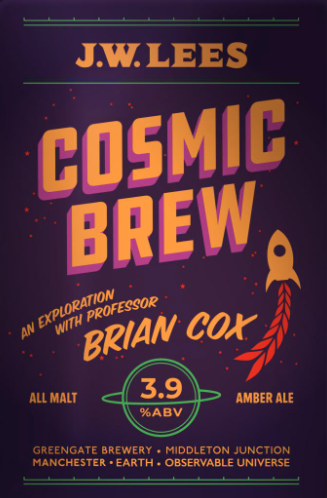 Branding for the beer was developed by design agency Squad and uses typography inspired by sci-fi comic book graphics. The beer label includes the pattern of the stars which represents the night sky over the JW Lees brewery on the day he was born: March 3 1968.

“It’s what I would have seen had I looked out of the window. There’s a fact for the pub quiz,” said Cox, who grew up in Oldham.

The 3.9% ABV amber ale is a blend of British hops, including Admiral, Jester and Cascade.

Alongside Cosmic Brew, Squad has created a seasonal range of beers with JW Lees that will be released in two-month cycles during 2019, with each paying homage to the bands that have shaped the Manchester and UK music scene, including Oasis, The Sex Pistols and Buzzcocks.

Cosmic Brew will launch into retail and to the on-trade in January 2019 and will be available in 500ml bottle and in cask, coinciding with Cox’s arena tour across the UK and Ireland.

This is the first endorsement Cox has committed to in his career, despite being asked by various companies to do so.