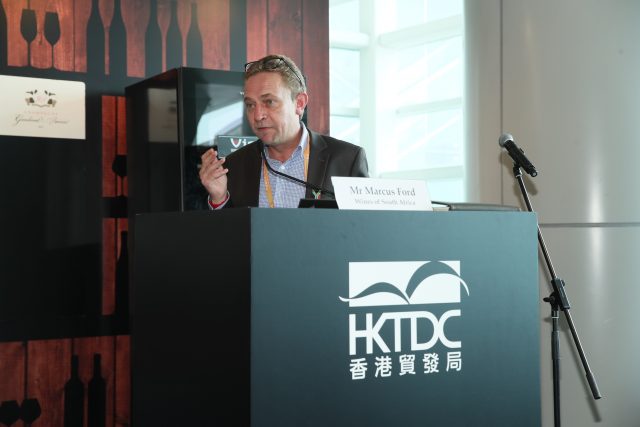 As China’s wine market continues to expand, Marcus Ford, Asia market manager for WOSA, noted a trend towards premiumisation, especially in the last 12 months, with “steep growth in the average price per bottle” – as high as 45% in some cases.

“The market historically started buying for health, now we are seeing growth in demand for quality. The market is becoming more sophisticated,” he said at the Asia Market Conference during the Hong Kong International Wine & Spirits Fair last week.

This echos findings by ExtraData, a Chengdu-based drinks industry research firm, which suggested a growing premiumisation trend for online wine purchase. Most of the growth in value came from wines priced at RMB 500 (US$72) a bottle and above to make up 42% of sales value generated in year ending July 2018, it continued.

Ford believes the industry needs to get the message across that wine is not just healthy, but a special source of enjoyment from a special place. “All these stories can be told better,” said Ford.

Viticulture in China has simultaneously exploded, and the country has become the world’s seventh-largest wine producer, according to QIV. But around 80% of wines consumed in the country are in fact produced domestically. “The vast majority of wine in China is red and produced in China,” he said.

Therefore, he stressed that China simply doesn’t produce wine of sufficient quality to meet demand from “more aspirational consumers”. While domestic wine production dipped, imports of foreign wines are increasing. The country’s wine imports have rocketed from 200,000 cases in 2002 to 60,000 million cases this year.

Born in Hong Kong, Ford worked for Shanghai restaurant M on the Bund and later one of the first premium wine retailers, Pudao Wines, before joining WOSA this year. Speaking of South African wines’ market in China, he admitted the country at the moment lacks what he calls “hero brands”.

Drawing comparisons to Chile, he explained, “Chile has hero brands, global brands that have massive marketing and appeal behind them. But South Africa doesn’t have that,” using Chile’s Concha y Toro as an example.

At the moment, China is the second most important export market for red wine from South Africa. “Red wine being the most important thing, we have to be nimble and creative,” he said when talking about marketing strategy.