Bonhams has once again broken the record for Scotch whisky sold at auction, with the sale of a 1926 Macallan which went for over £800,000 when sold in Edinburgh today. 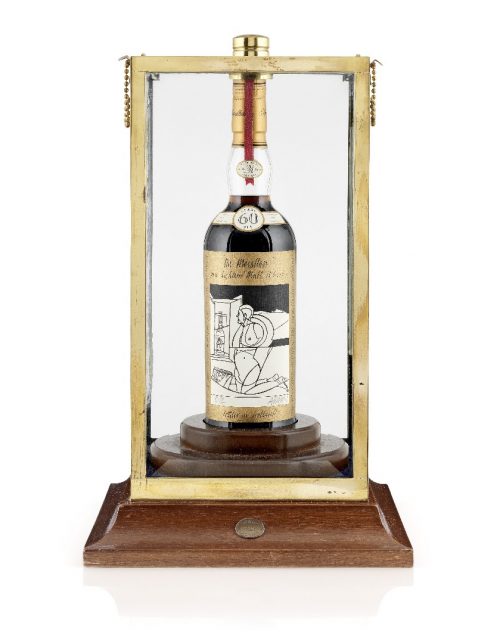 This beats the record set by Bonhams in Hong Kong earlier this year when a bottle of the same whisky was sold for, a then record, of £814,081.

Bonhams’ whisky specialist, Martin Green, said: “I am delighted at this exceptional result. It is a great honour to have established a new world record, and particularly exciting to have done so here in Scotland, the home of whisky. Bonhams now holds the record for the three most valuable bottles of whisky ever sold at auction.”

The Macallan bottled 24 bottles of its 1926 60 year old in 1986, each with a label by pop artists, 12 by Italian Valerio Adami and 12 by Briton Sir Peter Blake and each in a special ‘brass and glass’ presentation case known as a ‘Tantalus’.

It is not known how many bottles still exist, one is known to have been drunk and one was reportedly destroyed in the Japanese earthquake of 2011.

Sotheby’s meanwhile is due to sell a bottle with the Peter Blake label in New York later this month and whether it can break the latest record or not, it is due to be the most expensive bottle of wine or spirit the auctioneer has ever offered.