A Star Wars-themed bar will open at Disneyland in 2019, as part of its upcoming StarWars Land theme park attraction. 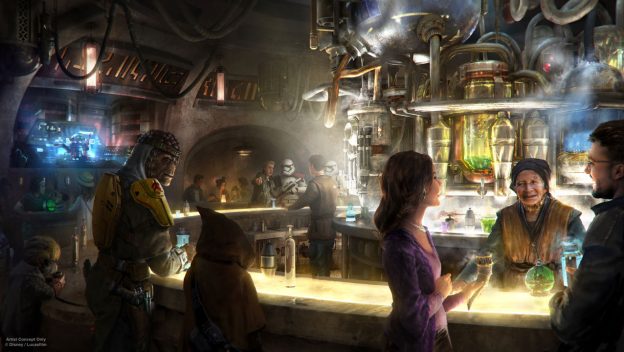 Star Wars: Galaxy’s Edge – which is due to open first at the Disneyland Resort in Anaheim, California in summer 2019 – will channel A New Hope and open a cantina-inspired bar.

Called Oga’s Cantina, it will open in both California’s Disneyland and Walt Disney World in Florida, and will sell “libations for adults”.

According to a Disney blog post about the new attraction Oga’s Cantina “is the kind of establishment that attracts some of the most interesting and disreputable characters in the galaxy”.

“You never know when a stormtrooper or a familiar face will show up,” the post continued. “Patrons of the cantina come from across the galaxy to sample the famous concoctions created with exotic ingredients using ‘otherworldly’ methods, served in unique vessels.

“With choices for kids and libations for adults, the cantina will make for a great stop!”

Musical entertainment will be provided courtesy by RX-24, the former StarSpeeder 3000 pilot droid we first met in Star Tours, who has re-envisioned himself as the cantina’s DJ.

Both non-alcoholic and alcoholic cocktails will be available to visitors, alongside a list of beer and wine options.

The bar will first open at Disneyland Resort in Anaheim, California, where the Galaxy’s Edge attraction will open to the public in summer 2019. Walt Disney World Resort in Orlando, Florida will then open the Star Wars stations several months later, in autumn 2019.